"For 363 miles, you are that land’s edge where rivers meet and feed an ocean, a shoreline studded with dune and tide pool, cliff and lighthouse, its entire wave-swept length open to us all. You are our Pacific Coast." -- Paulann Petersen, Oregon Poet Laureate Emerita

We are pleased to feature the work of one our most prolific authors, Cameron La Follette, who is an expert on the cultural history of the Oregon Coast. She is the executive director of Oregon Coast Alliance, a nonprofit coastal conservation organization. Her publications include Sustainability and the Rights of Nature: An Introduction (CRC Press, 2017) and Sustainability and the Rights of Nature in Practice (CRC Press, 2019). Cameron is also a traditional poet whose work is archived by the University of Oregon Special Collections and University Archives. She is the lead researcher and author on most of the articles in a special issue of the Oregon Historical Quarterly on “Oregon’s Manila Galleon,” (Summer 2018), which explores the identity of the Spanish galleon that wrecked on Nehalem Spit. 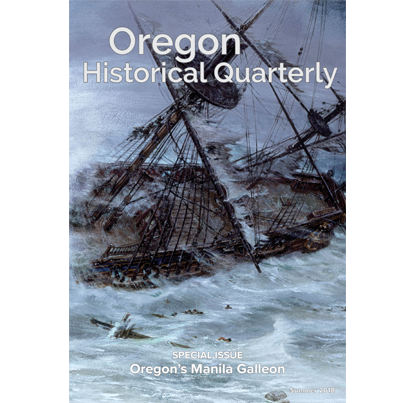 For two centuries, physical evidence of a vast shipwreck, including beeswax and Chinese porcelain, has washed ashore in the Nehalem Spit area on the north coast of Oregon. The story of the wreck has been “shrouded by time, speculation, and surprisingly rich and often contradictory Euro-American folklore.” In this introduction to the Oregon Historical Quarterly’s special issue, “Oregon’s Manila Galleon,” authors Cameron La Follette, Douglas Deur, Dennis Griffin, and Scott S. Williams summarize the rich archival findings and archaeological evidence that points to the Santo Cristo de Burgos, a Manila galleon owned by the kingdom of Spain and bringing Asian trade goods to the Americas, as the ship that came to be known as the “Beeswax Wreck.”

The Gallery in the Corner

"When in a museum, walk slowly but keep walking." Gertrude Stein.

Check this page monthly to browse through a brief and portable digital history exhibit, open all hours, wine and cheese optional.