The U.S. Lighthouse Service completed Desdemona Sands Lighthouse in 1902 to replace the demolished Point Adams Lighthouse, near the mouth of the Columbia River. It was one of the last wooden straight-pile lighthouses built in the United States. Desdemona Sands was deactivated in 1934 and dismantled in 1945.

On June 6, 1900, the U.S. Congress appropriated $24,000 to establish a light and fog signal station at Desdemona Sands. The Lighthouse Service signed the contract on February 24, 1902, and the structure was completed by November 1902. The keeper lit the lantern on December 24.

The lighthouse was built on the extensive shoals near the mouth of the Columbia River, which stretch southeast for about nine miles. Maps of the region, beginning in 1851, flagged the area as dangerous to mariners. The Coast Pilot, from its 1853 issue to 2011, variously describes Desdemona Sands as a sandy islet with extensive flats in the middle of the river or shifting sand shoals that dry at low water. Desdemona Sands received its name from the Maine-built bark Desdemona, which wrecked on the shoal on January 1, 1857, when the captain attempted to reach Astoria without a bar pilot. All the crew was saved, although one man drowned in the rescue. The cargo on the deck was washed off, but some stowed cargo was saved and taken to Astoria.

Desdemona Sands Lighthouse, designed by U.S. Lighthouse Board architect Carl W. Leick, was a white, octagonal dwelling, one and a half stories high, on a rectangular platform constructed on piles. It had a cylindrical lantern with a fourth-order Fresnel bull’s-eye lens, a bronze-colored roof, and a fog signal on the building’s westerly side. The light, perched thirty-six feet above the river, was visible for eleven miles. Unlike many other lighthouses, Desdemona Sands had no quarters for the head keepers’ and assistant keepers’ families. The families lived ashore in the Astoria area while the keepers stayed in the lighthouse, often for weeks on end, visiting as weather permitted.

Situated in the middle of the Columbia River, Desdemona Sands keepers had a year-round view of the lower river’s marine traffic. The lighthouse had its own boat, stored on davits on top of the platform and used for supplies and in emergencies. In 1905, 2,105 tons of stone riprap was placed around the outer pilings to strengthen the structure. Several years later, a French bark, the Pierre Antonine, collided with the lighthouse on November 19, 1914, requiring repairs costing $541. But the principal concern at Desdemona Sands was fire, as oil for the lamps had to be stored in the wooden building. In 1916, a keeper spilled a bottle of alcohol that exploded and set the building on fire, but the flames were extinguished before the building was seriously damaged.

The Desdemona Sands Lighthouse was electrified in 1933, which required 8,000 feet of submarine cable. It was overhauled in 1934 with a new wood-pile structure and a wood frame tower sheathed with asbestos cement sheets. Both the light and fog signal were operated from shore by remote control by a part-time caretaker. These improvements, which cost $19,502, meant that the lighthouse could be deactivated as a staffed station.

After the lighthouse was demolished in 1945 and replaced by a light beacon, the Fresnel lens was sent to the Mukilteo Light Station museum in Puget Sound. The beacon was decommissioned in 1964. Broken pilings on the shoal mark where the lighthouse once stood. 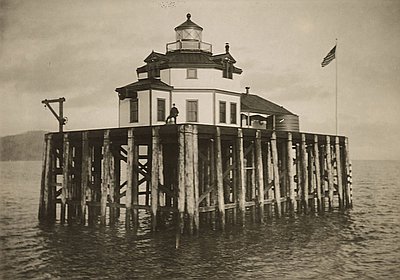 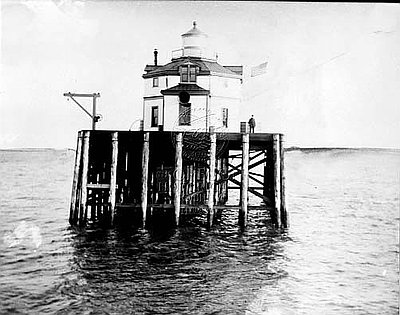 The extensive, dangerous bar channel at the entrance to the Columbia River has a worldwide reputation among seamen as the "graveyard of the Pacific." Ever since Capt. Robert Gray entered the river in 1792 on the Boston-registered ship Columbia Rediviva, there has been a pressing need for competent pilotage …

Point Adams was given its name by Captain Robert Gray, who in his official log entry on May 19, 1792, named the spit of land Adam’s Point. Captain George Vancouver, later that year, referred to it as Point Adams, and the United States Exploring Expedition adopted that version …