The Wreck of the Congress (ship)

The rescue of all 445 people aboard the burning passenger steamer Congress in 1916 was the largest single maritime rescue operation in Oregon history. It was also a personal and professional triumph for Captain N. E. Cousins and remains in Oregon’s memory as the greatest disaster-avoided event ever to take place on the coast.

The 424-foot-long Congress, built in Camden, New Jersey, in 1913 and owned by the San Francisco-based Pacific Coast Steamship Company, was the largest steamship vessel in the West Coast trade in the early twentieth century, weighing 7,985 tons. It operated as a passenger steamer between Seattle and southern California by way of San Francisco.

On September 13, 1916, the Congress—with Captain Cousins, a company veteran, as master—left San Francisco at noon, bound for Seattle with 445 passengers and crew. On September 14, when the ship was about thirty miles off Coos Bay, fire broke out in the aft hold and, despite the crew’s efforts, began to engulf the vessel. Luckily, the day was calm and cloudless. Once it became clear the fire could not be extinguished, Captain Cousins set course directly for Coos Bay, at full steam.

Residents of Coos Bay—or Marshfield, as it was then known—heard of the disaster on the wireless when Captain Cousins sent word that his ship was afire and he was eight miles offshore. Some one thousand residents, including doctors, a priest, and photographers, rushed to the lower bay ready to help.

On the captain’s orders, the crew herded passengers to the bow of the ship, farthest from the fire. Even when the decks became hot to stand on, people reportedly remained calm. H. L. Peck, a passenger, described the disaster for an Oregon Daily Journal reporter: “He said it was probably 3 o’clock in the afternoon when the fire was first known. Some of the baggage was piled in the bow of the boat and the passengers were brought together. Like all the others, he remarked at the coolness of the people and the excellent conduct of the crew.” Mrs. S. R. Sorenson of San Francisco said that she “never saw a crowd act so well in danger....Everyone was awakened in the same quiet manner and all excitement was avoided. I do not know whether they all realized how serious the fire was, but all seemed to have perfect confidence in the crew.”

Passengers and crew were transferred from lifeboats and various local vessels to the Army Corps of Engineers steam hopper dredge Colonel P.S. Michie, which headed to the Coos Bay–North Bend area. All on board were saved, and there were few injuries. Within four hours of the discovery of the fire, everyone was off the ship. Captain George Seeley and his crew on the Michie were praised for their work in bringing the passengers to safety. From Coos Bay, a special Southern Pacific rescue train took the passengers and crew to Eugene, where they were transferred for the final leg of the trip to Seattle.

Captain John F. Blain of the Pacific Coast Steamship Company, viewing the scene of the disaster on September 17, told the Oregonian that “the Congress is gutted fore and aft, all the woodwork being burned away, and nothing is left but the steel frame work, which is not collapsed. The boilers and engines are intact, and the engines can be turned over as soon as steam is procured. The oil tanks were not disturbed, and have 3500 barrels left in them...the cargo is entirely destroyed and there is still fire in the forward hatch.” The Congress and its cargo, he said, “were worth $2,225,000. The value of the vessel today is probably 25 per cent of her value before the fire.” The tug Oneonta from the Columbia River eventually towed the hull of the Congress to Seattle. An official investigation closed without finding fault with the captain or crew, and a subsequent company investigation failed to determine the cause of the fire. It remains a mystery. 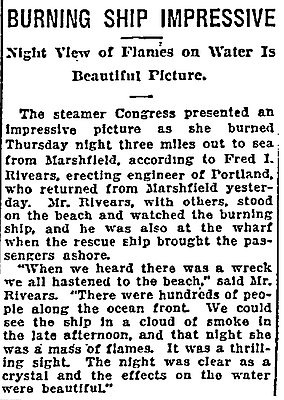 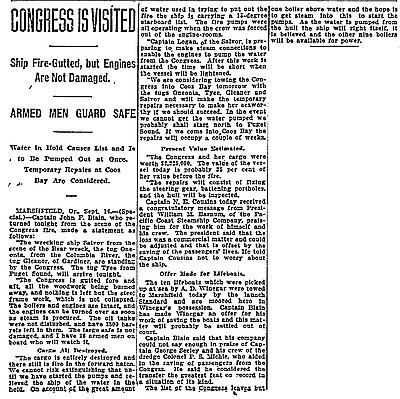 “Congress is Visited. Ship Fire-Gutted, but Engines Are Not Damaged.” Sunday Oregonian, September 17, 1916.

The wreck of the Czarina is remembered as a tragedy that had no heroes, no villains, and no hope. The iron-hulled steamship, which weighed 1,045 tons and was 216 feet long, was built in England in 1883 and owned by Southern Pacific Company of San Francisco. When it wrecked on …

The New Carissa, a 639-foot freighter, wrecked on the North Spit near North Bend early on the morning of February 4, 1999, causing what many experts consider Oregon’s worst oil spill disaster. High winds and twenty-six-foot swells drove the ship aground south of Horsefall Beach, about 2.7 miles north …