Sisters Rocks, thirteen miles north of Gold Beach, is a distinctive clump of two domed rocks connected to the mainland and a third rock offshore. The rocks—also known as Three Sisters and Frankport, due to a historic harbor—are mainly of Jurassic volcanic origin and are highly resistant to erosion. The two principal monoliths, which form small bays, one on each side, are now an undeveloped nature-focused state park.

Before EuroAmerican immigration, the Rocks marked the southern limit of territory controlled by the Cosutt-Henten people and the northern limit of the Euquatchee. Remains of shell middens, largely destroyed by later quarrying, are evidence of its importance to Native peoples. After American settlement, early ranches in the area included John O’Brien’s Three Sisters Ranch and Herman Francis Reinhart’s Pacific Ranch. As early as the 1850s, Three Sisters also served as a safe port for boats caught by storms or tempestuous seas between Port Orford and Gold Beach.

The main natural harbor at Sisters Rocks, though small, was the site of speculation and business ventures among early settlers, who needed ports to facilitate transportation of local products. It was described in 1888 as a good summer harbor, “said to have no dangerous rocks...a fine opening for a store and warehouse.”

California businessman S. H. Frank developed the site in 1893 into a local shipping point for his large tannery in Redwood City. During the nineteenth century, tanoak (Notholithocarpus desniflorus) was cut commercially and the logs stripped of bark for the extraction of tannin, which was necessary for curing hides to make leather. Frank bought large tracts of local tanoak forest in the 1860s, as well as the oceanfront property at Sisters Rocks, and S. H. Frank Company used steam and sail schooners to transport tanoak bark to Redwood City.

The bark was harvested during a summer window of about six weeks, when peeling bark from freshly cut trees was feasible. At the docks, workers, often Curry County residents, labored as wood crews, teamsters, and longshoremen. The Frankport “village” consisted of a barn, a bunkhouse, and storage buildings. Horses were worked on a quarter-mile railroad track to transport the bark to the dock. The warehouse and company-owned residence was a third of a mile southeast of Sisters Rocks.

Departure of the tanoak-laden boats from Frankport was marked by a community dance, according to Ophir resident Edith Jones, whose parents hosted Frank when he came to Curry County. After the boats came in and were loaded, and the warehouse emptied of tanoak bark, a dance would be held. “Families from the area would come, bring with them food for dinner and bedding,” she remembered, and “the adults would dance all night, until it was time to go home and milk the cows.”

The tanoak business collapsed in Curry County by the end of the nineteenth century due to overcutting that left few trees large enough for tannin production. The Frank Company stopped using the port in about 1901. Clayton Mark of Chicago purchased both the forestland and the Frank property at Sisters Rocks in the 1920s, with an eye toward logging his 30,000-acre holdings and shipping the logs from Frankport. The county pinned many hopes on the potential enterprise, expecting that “the operations....will mean logging camps and payroll and activities for a section of the county which has in recent years been without any industry.” But the Mark proposal came to nothing, and Frankport remained abandoned.

Sause Brothers Ocean Towing Company of Coos Bay bought the Frankport land in 1955 for $25,000. The dock was rebuilt in 1958, and a local contract logger, Jesse Howard Coldiron, interested Sause Bros. in constructing a dock strong enough to handle loading equipment and log trucks to supply Curry County logs to British Columbia. Using local old-growth logs, a dock the length of a football field soon took shape, and a half million board feet of timber was sent to Vancouver. Throughout the late 1950s, Sause Brothers shipped barge loads of one to two million board feet of Douglas-fir to southern California on contract to U.S. Plywood and Evans Products, among other companies.

Sause Bros. also mined and shipped jetty rock and aggregate at the site from 1956 to 1969. The rock was used to repair the south jetty on the Rogue River, as well as for riprap and road projects. Curry County denied Sause Brothers a permit in the 1970s to operate a full-scale quarry at the site, but use of already blasted rock continued.

Sisters Rocks received notoriety in June 1987 when it was used as the base camp for a marijuana smuggling operation. Alerted to a boat without lights at the Frankport harbor, the Coast Guard shone a helicopter spotlight on it, causing the smugglers' ship to run aground. It spilled 17,000 pounds of contraband marijuana into the ocean, which was recovered by police the next morning.

Continued blocking of the access road to Sisters Rocks ultimately created a groundswell of support for acquiring the property by the Oregon Parks and Recreation Department, but Sause Brothers and the state could not agree on a purchase price. Eventually, the parties reached agreement, and the 75.69 acres became a state park in 2003. Now named the Sisters Rocks State Natural Area, the park offers ocean views and a sea cave in a largely unspoiled and historic setting. 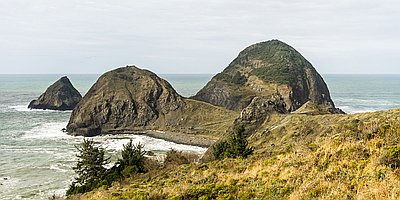 “Curry: Capital from California for a Big Timber Enterprise.” The Morning Oregonian. January 1, 1901.