Wreck of the General Warren (ship)

The highly publicized wreck of the General Warren in January 1852 off the Columbia Bar was one of the worst accidents in Northwest seafaring. The shipwreck contributed perhaps more than any other to establishing the Columbia Bar’s reputation for destructiveness.

The General Warren, a schooner-rigged sidewheel steamer built in Portland, Maine, in 1844, was owned by Oregon City-based Abernethy & Clark, a mercantile shipping firm that bought the ship in 1850 for the Pacific coastal trade. Sketchy contemporary records indicate that by the time of its last journey the eight-year-old steamer had been recognized as unseaworthy. An Abernathy & Clark employee, Captain Gilman, had decided not to book passage for San Francisco after seeing the ship in Astoria, judging it to be overloaded and in poor condition. Nevertheless, in January 1852, under the command of Capt. Charles Thompson, the steamer carried passengers on its journey from Portland to San Francisco, along with a cargo of unbagged wheat taken on in Portland and some seven hundred live hogs loaded at St. Helens.

Near dark on the late afternoon of January 29, the General Warren passed the formidable Columbia River Bar with experienced Astoria bar pilot Captain George Flavel at the helm. Flavel turned the ship back over to Captain Thompson and returned to Astoria in a pilot boat. The weather was rough, and the ship hoisted sail to assist the steam power, but high winds and a snowstorm carried away the foretopmast at about eleven o’clock that night. Captain Thompson decided to return to Astoria and urgently fired a cannon to signal for a pilot.

The next afternoon, delayed by the rough weather, Flavel came alongside the General Warren in a local pilot schooner. He told Captain Thompson it would be dangerous to attempt to cross the bar to reenter the Columbia so late in the day, with a rising gale and the ebb tide creating a fierce outward-flowing current from the river. But the passengers sent a contingent to the bar pilot, begging him to take the ship back over the bar despite the danger. Captain Thompson apparently concurred, though the record is not clear.

With great misgivings, Flavel agreed to pilot the General Warren back to Astoria and again took the helm of the ship. It was now about five o’clock in the afternoon, under the gathering darkness of the storm. The ship, making little headway against the ebb tide despite operating at full steam, also began leaking. To make matters worse, the unbagged wheat was absorbing seawater and clogging the pumps. Captain Thompson, knowing the ship was old, fragile, and not very seaworthy, ordered the vessel to be beached immediately once over the bar, instead of anchoring in the channel as Flavel ordered.

Flavel, who had not known how unseaworthy the ship was, headed the General Warren for nearby Clatsop Spit on the south edge of the river and beached it at about seven o’clock. But by then it was dark, and the passengers and crew could not reach the shore in the face of heavy breakers. Within two hours, tempestuous seas had sheared off the back part of the vessel and washed away one of the two lifeboats. Captain Thompson ordered all on board to cluster at the front of the ship.

By about three in the morning the forward part of the ship was breaking up rapidly. Thompson ordered nine oarsmen and passengers into the remaining lifeboat, under Flavel’s charge, to go to Astoria for help. They reached Astoria by early morning and asked Captain Beard of the George and Martha to go to the General Warren’s aid. By the time Beard arrived at Clatsop Spit, at about five o’clock that morning, the ship had broken up and drifted away. More than thirty passengers and crew, including Captain Thompson, were lost. The only survivors were the nine men who had reached Astoria in the lifeboat. In October 1854, more than two years later, the stern portion of the General Warren washed ashore on a beach sixty miles to the north.

The tragedy’s aftermath was long lasting. The loss of the ship and the death of so many people strengthened the need for and support of experienced bar pilots to aid ships crossing the Columbia River Bar. The wreck also cemented Flavel’s reputation as Astoria’s leading bar pilot, known for his unflagging courage and expert seamanship. 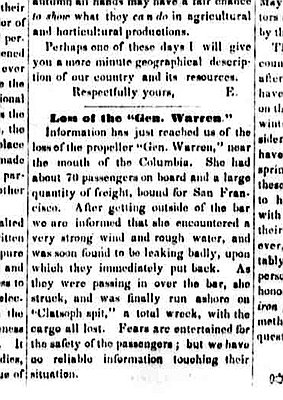 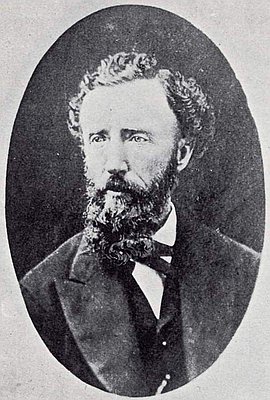 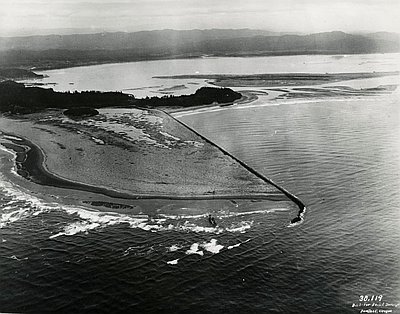 The extensive, dangerous bar channel at the entrance to the Columbia River has a worldwide reputation among seamen as the "graveyard of the Pacific." Ever since Capt. Robert Gray entered the river in 1792 on the Boston-registered ship Columbia Rediviva, there has been a pressing need for competent pilotage …

As a young man in 1849, George Flavel made his way to Astoria after a stint as captain of the brig John Petty. He sailed around Cape Horn and spent time in California during the Gold Rush years. As a result of his work as a sea captain and businessman, …