Cape Lookout, one of the most prominent landmarks on the Oregon Coast, is a long, narrow promontory of rugged basalt that stretches over a mile and a half into the Pacific Ocean, approximately ten miles southwest of Tillamook. The cape is remarkable for its long oceanward reach and sheer cliffs that plunge 400 feet to the sea. Cape Lookout is a remnant of massive lava flows from roughly 16 million years ago, when Grand Ronde Basalt from eastern Oregon poured west-southwest more than two hundred miles into the Pacific Ocean.

The promontory is heavily forested with Sitka spruce, hemlock, and other species. The base is rich in seabird colonies, and visitors occasionally see sea lions in nearby waters. The wave-battered rocky flanks of Cape Lookout are known for rocky intertidal habitats, which abound in mussel beds, sea stars, gastropods, crustaceans, mollusks, fish, and seaweeds characteristic of basalt exposures in the intertidal zone. Historically, Native resource harvesters used the Cape to access fishing and shellfish-gathering areas along narrow trails that followed clefts in the basalt, a practice that later gained popularity among non-Native recreational anglers, especially during the first half of the twentieth century.

The name Cape Lookout is the result of historical confusion among early explorers and surveyors. In July 1788, John Meares, a British mariner and fur trader, gave the name “Cape Lookout” to the promontory now known as Cape Meares. On its charts in 1850 and 1853, however, the U.S. Coast and Geodetic Survey misapplied the Cape Lookout name to a prominent cape ten miles to the south, and the name became widely used among mariners. Once the Coast Survey realized its mistake, George Davidson, an officer of the Survey, decided that the easiest solution was to give a new name to the more northerly cape. He named it Cape Meares in 1857.

The U.S. government retained land on both headlands for a possible lighthouse. While Congress was considering the initial appropriation for a light on Cape Meares in 1886, the U.S. Army Corps of Engineers sent J.P. Polhemus to examine both headlands. He camped, hiked, and took measurements and compass readings on both capes and reported that Cape Lookout, situated almost exactly between lighthouses on Tillamook Rock and Yaquina Head, would be an excellent site. He also concluded, however, that a lighthouse on Cape Lookout would be at a higher elevation than usual and would suffer from fogs that would obscure and dim the light. Further, there was no fresh water supply, and getting construction materials to the site would be difficult. In the end, the U.S. Lighthouse Board approved a lighthouse at Cape Meares in 1887, rendering the Cape Lookout land surplus.

Under the State Park Superintendent Sam Boardman, the Parks Division acquired the nucleus of Cape Lookout State Park in 1935 when the U.S. Lighthouse Service gave the state 975 surplus acres on the headland. The Parks Division later purchased land to the south of the Cape. To the north, the state acquired Netarts Sandspit and the marshes lining Netarts Bay from the Great Northern Railway through a land exchange and a donation.

Boardman described the 2,000-acre Cape Lookout State Park as one of Oregon’s “crown jewels.” The U.S. Biological Survey (now the U.S. Fish and Wildlife Service) praised the park’s biological diversity, an evaluation that helped broaden Boardman’s appreciation of the area’s significance. Stanley G. Jewett, regional biologist for the Biological Survey, observed 154 bird species on the cape, which inspired Boardman to add less scenic land, such as marshes, to the park because of its value as nesting habitat. Boardman was reluctant to allow development at Cape Lookout, viewing the park primarily as a nature reserve set aside to preserve the rugged headland. Nevertheless, he approved a trail to the end of the cape and a small, primitive picnic area at Jackson Creek. He also coordinated with the Civilian Conservation Corps to further develop the picnic area during the late 1930s.

Under Boardman’s successors, the Parks Division expanded facilities at Cape Lookout to accommodate heavy visitor use. A small campground built in the 1950s was expanded and now includes 231 camping sites, yurts, deluxe cabins, hookup sites for recreational vehicles, and a hiker/biker camp. The park also has a meeting hall. Tillamook County built a road over Cape Lookout in the early 1960s to connect Netarts Bay and Sand Lake, which gave automobiles access to the trailhead on the cape.

On August 1, 1943, an Army Air Force B-17 bomber from Pendleton Field in eastern Oregon struck Cape Lookout while flying north on a coastal patrol in thick fog. The area of the crash was so remote that rescue crews could not reach the site for a full day. Eight crew members were killed, including pilot Roy James Lee; the only survivor was bombardier Wilbur L. Perez. A plaque on the Cape Lookout trail commemorates the accident.

The Oregon Coast Trail passes through the park, extending north through coastal forest and south for almost two miles to a quiet beach, approximating the trail used by Natives and early non-Native settlers. Each year, roughly 150,000 people make day visits to Cape Lookout and some 126,000 people camp there.

Cox, Thomas R. The Park Builders: A History of State Parks in the Pacific Northwest. Seattle: University of Washington Press, 1989. 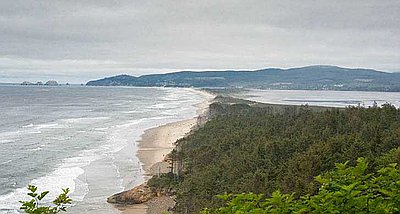 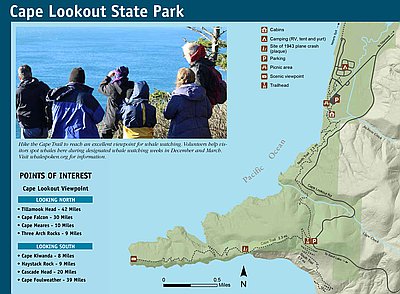