Tillamook Rock Lighthouse sits on a rock a mile offshore of Tillamook Head in Clatsop County, Oregon. Operating from 1881 to 1957, the lighthouse was nicknamed Terrible Tilly for its ferocious storms and the difficulties facing lighthouse keepers stationed there. It was the most expensive lighthouse built in the United States up to that time.

In 1878, Congress appropriated $50,000 for a first-class lighthouse to facilitate navigation on the north Oregon Coast, particularly the approaches to the treacherous Columbia River Bar. The lighthouse was originally slated for Tillamook Head, located between Seaside and Cannon Beach, but officials determined that the south-facing landform would not provide good visibility for mariners seeking the Bar. Development plans turned to Tillamook Rock. Tillamook Head, declared surplus, was later donated by private owners to the state and became the nucelus for Ecola State Park.

An isolated, storm-battered basaltic island less than an acre in size, Tillamook Rock rises nearly 100 feet from the sea 1.2 miles due west from Tillamook Head and 20 miles south of the mouth of the Columbia River. Violently churning seas crash against the steep sides of the Rock and surge high up its sloping eastern face. Nineteenth-century reports describe it as home to hundreds of sea lions and countless seabirds, and Natives in the area considered the Rock as resource-rich yet exceptionally dangerous to people traveling by canoe.

Building a lighthouse on Tillamook Rock was perilous. The first person hired to undertake a survey, thirty-eight-year-old master mason and lighthouse builder John R. Trewavas of Portland, missed his footing on the eastern face of the Rock, and surging waters swept him into the sea. Local craftsmen were reluctant to work on the Rock, especially after Trewavas’s death, and construction foreman Charles A. Ballentyne hired eight skilled quarrymen from outside the area. The quarrymen stayed at Fort Canby, near Ilwaco, Washington, while awaiting the chance to slip out through storms to Tillamook Rock.

They made the trip on October 12, 1879, and the quarrymen constructed wooden shelters on the wet, sloping surface. They worked under trying conditions to dynamite the Rock's rounded head and level a space for the lighthouse. One gale swept away the supply house and marooned the workers for sixteen days. Native accounts suggest that workers also shot many sea lions, mainly to clear the rock for the ongoing construction.

By the end of May 1880, workers had flattened the top of the Rock, and the cornerstone for the lighthouse was laid on June 22. Two derricks ferried equipment and materials by cable to the construction site from ships below—the cutter Corwin and steam schooners Mary Taylor and George Harley, standing well off the Rock for safety. Workers unloaded everything from ashlar stone blocks to clean sand, as well as the fog signal boilers and the delicate first-order Fresnel lens. Construction took over two hundred days.

Duty at Tillamook Rock meant isolation, punishing storms, and a hazardous environment. Supplies were often delayed for days or even weeks, and communication was possible only by telegraph via an underwater cable to Indian Beach at present-day Ecola State Park. Monstrous storms often battered the Rock, contributing to the lighthouse’s nickname, Terrible Tilly. During a gale in October 1934, for example, winds of over a hundred miles an hour pounded the coast. Waves surged over the tower, shattering the Fresnel lens, and the battered lighthouse became a shambles of ruined equipment and flooded rooms as boulders crashed into the building. The telegraph cable was severed, and all of the landing gear was carried away. The keepers finally made contact with the mainland using a code-sending transmitter cobbled together of spare parts by keeper Henry Jenkins.

The first head keeper at Tillamook Rock, Albert Roeder, lasted only four months. Still, a number of keepers served for many years, among them William Dahlgren (1901-1919), Robert Gerloff (1903-1928), George Wheeler (1929-1952), and Oswald Allik, who started in the late 1930s and was serving as head keeper when the Coast Guard closed Tillamook Lighthouse on September 1, 1957. Tillamook Rock, by then the most expensive lighthouse in the country to maintain, had been made obsolete by modern radar and communications technologies.

Declared surplus, Tillamook Rock was sold several times. Real estate developer Mimi Morrissette purchased the property in 1980. She gutted the lighthouse and cemented its windows, converting it into the Eternity at Sea Columbarium. Those willing to pay between $1,000 and $5,000 (for the choicest spot, in the lantern room) could have their ashes interred there. The columbarium lost its license in 1999 due to inaccurate recordkeeping, and later license applications were rejected.

Still privately owned, Tillamook Rock is part of Oregon Islands National Wildlife Refuge, and the lighthouse is listed on the National Register of Historic Places. The seabirds and sea lions have returned. 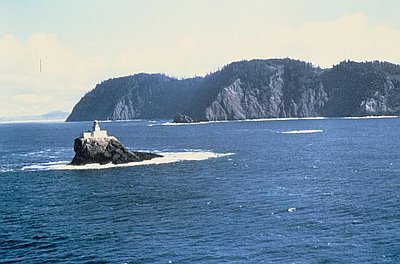 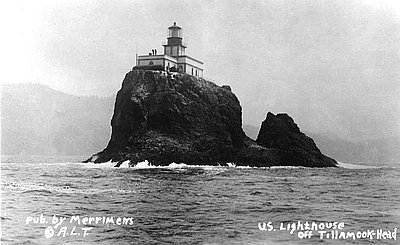 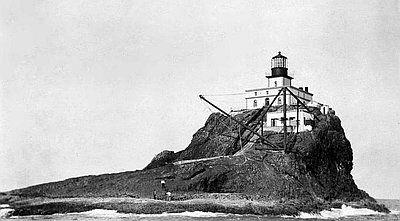 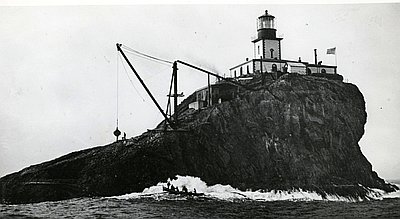 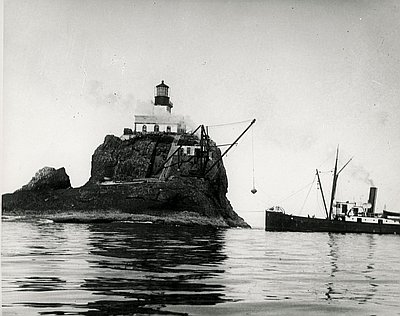 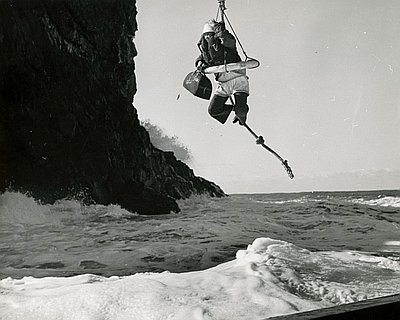