The Cape Arago Lighthouse sits on a small island off Cape Arago, south of the entrance to Coos Bay and separated from the mainland by a narrow, rocky channel. Decommissioned in 2006, the lighthouse and island are owned by the Confederated Tribes of Coos, Lower Umpqua, and Siuslaw Indians. Completed in 1866, it was the second lighthouse in Oregon. The first was a lighthouse tower on the Umpqua River north of Coos Bay, which was built in 1855–1856 and toppled in 1863.

Cape Arago Lighthouse is on Chiefs (or Chief’s) Island, named by the Coos, whose homelands include the headland across from the island. EuroAmerican residents who arrived during the nineteenth century saw the island in a different way. As the town of Coos Bay grew in commercial importance through the 1860s, community and business leaders decided that a lighthouse was imperative to guide mariners over the treacherous Coos Bay bar. With a $15,000 appropriation from Congress, approved in July 1864, the lighthouse was built at the northern tip of Lighthouse Island, as non-Natives came to call it, with the keepers’ quarters at the southern end. The skeletal octagonal tower—25 feet high and supported on stilts—was enclosed in sheet iron, with the lantern room perched above. The keeper’s dwelling was linked to the tower by a 1,300-foot-long wooden walkway. The first head keeper, Leonard Hall, lit the light on November 1, 1866.

Travel by rowboat to and from the island across the narrow channel to the mainland, a few hundred feet away, was often perilous due to tempestuous seas and strong winds. A low bridge was built in 1876, but it lasted only until a November gale in 1877 destroyed it and the boathouse. The rebuilt bridge washed away as well and needed constant repairs, and lighthouse personnel frequently had to use rowboats once again to make the trip.

In 1891, the government built a 400-foot-long cable tramway, which was operated with a hand winch on the mainland. The tramway worked well, but it was dangerous. In July 1898, assistant keeper Thomas Wyman, his daughter, and two others fell into the surf when the cable snapped. The keeper landed on the rocks, shattering his legs, one of which required amputation; his daughter and the others had no permanent injury. A high bridge connecting the island and the mainland was completed a few weeks later.

The U.S. Lighthouse Board built the first life-saving station in Oregon on the island in 1878. The station was moved to the mainland in 1891, but fog continued to be a menace to commerce in and out of Coos Bay. In 1893, the Lighthouse Board requested the use of $15,000, left over from the construction of a lighthouse on the Coquille River, to build a fog signal and reconstruct the keepers’ quarters. Although hampered by difficulties in landing supplies and the wreck of a schooner carrying materials, the fog signal and new keepers’ quarters were completed in May 1896.

Ten years later, erosion threatened both the tower and the fog signal. The Lighthouse Board built a new combined wooden lighthouse, again with an octagonal tower and a fog signal, on the south end of the island. Congress appropriated $20,000 in March 1907; the combined buildings cost $18,785. The new lighthouse, which began operating on July 1, 1909, had a fourth-order Fresnel lens, manufactured in Paris by Barbier, Benard and Turenne.

Cape Arago’s third lighthouse was built in 1934 of concrete to make it more durable in its exposed location. Local resident R.J. Hillstrom was awarded the contract to build the lighthouse, which had a two-story octagonal tower. The 1909 wooden lighthouse became the keeper’s office.

By the mid-1960s, only the third lighthouse remained on the island. The first was dynamited in 1936, the keepers’ duplex was razed in 1957, and the second lighthouse was demolished in the early 1960s. After the U.S. Coast Guard took over the functions of the Lighthouse Board in 1939, the keepers were housed in a fourplex on the 43-acre mainland part of the lighthouse reservation, opposite Chiefs Island. The Coast Guard automated the Cape Arago Lighthouse in 1966 and placed the Fresnel lens on display at the Coast Guard Air Station in North Bend in 1993.

The Cape Arago light was deactivated on January 1, 2006, after 140 years of service. The Confederated Tribes of the Coos, Lower Umpqua, and Siuslaw Indians had long maintained an interest in Chiefs Island and the adjacent area and in 1975 obtained an easement on the mainland. In 2008, President Barack Obama signed a bill, sponsored by Representative Peter DeFazio, transferring the Cape Arago Lighthouse to the Tribes, who are obligated to make it available to the public for educational, cultural, recreational, and other purposes.

The Coast Guard renovated and repainted the Cape Arago Lighthouse and turned it and twenty-four acres of surrounding land, incuding Chiefs Island, over to the Confederated Tribes of the Coos, Lower Umpqua, and Siuslaw Indians on August 3, 2013. The high bridge to the island was removed to prevent unauthorized access, and the shoreline was restored to its natural condition. The lighthouse is not currently open to the public. 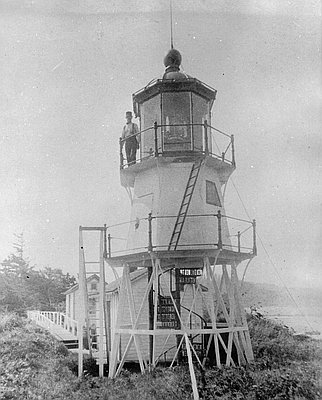 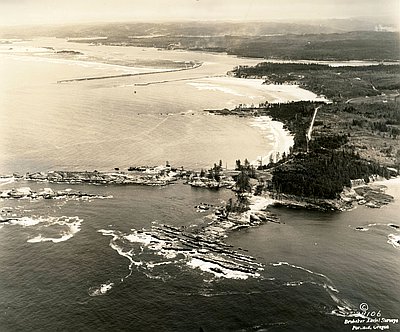 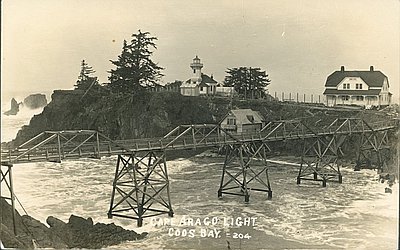 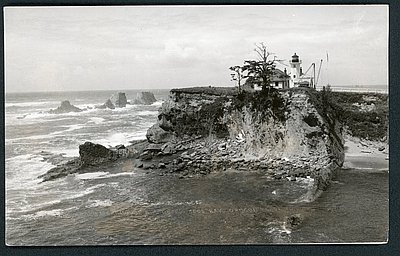 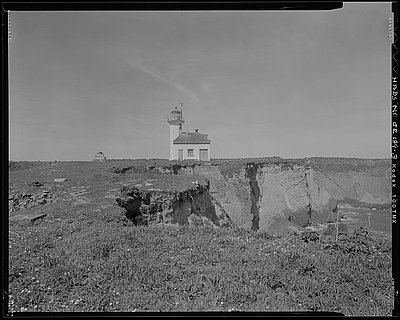 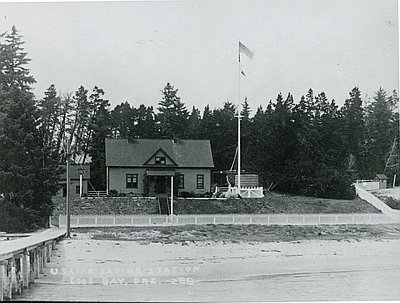 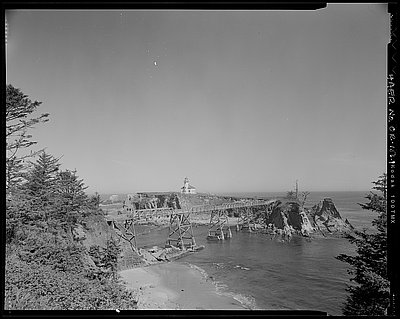 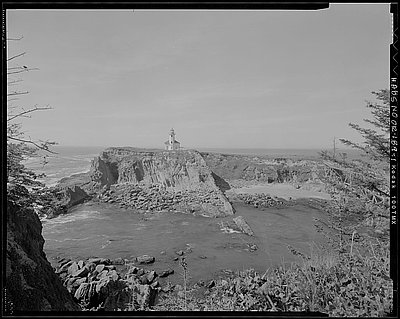 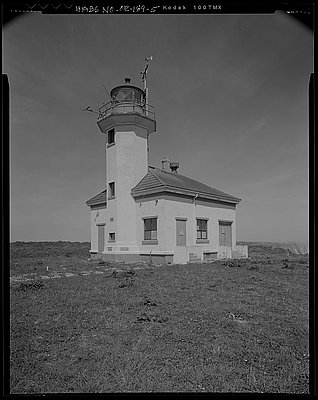 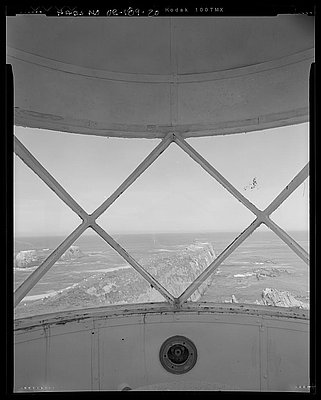 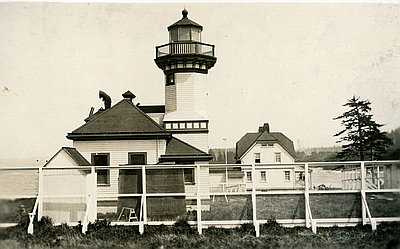 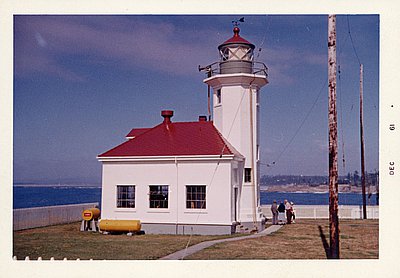 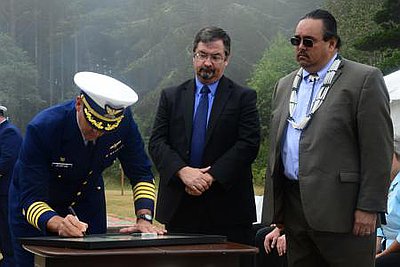 The City of North Bend is located on about five square miles at the north bend of the Coos Bay, bounded by the bay and the City of Coos Bay. Before European contact, ancestors of the Coos Indians lived around the temperate bay for nearly ten thousand years. Trappers, traders, …

From 1933 to 1942, Civilian Conservation Corps (CCC) enrollees in Coos County’s seven camps spent their summers fighting forest fires and building the trails, roads, and lookout towers that would provide quicker detection of fires and make them easier to contain. The Coos County Forest Patrol Association (CCFPA) depended on …

Heceta Head Lighthouse stands 205 feet above the Pacific Ocean on a bluff carved out of the west side of 1,000-foot-high Heceta Head, twelve miles north of Florence. The light shining from the 56-foot-high tower flashes a white beam for eight seconds every minute. Visible for twenty-one miles, it remains …