Cape Meares Lighthouse is located atop Cape Meares, a scenic craggy headland about ten miles southwest of Tillamook Bay, where sheer cliffs drop some three hundred feet to the waters below. Both the lighthouse and the headland are named for British explorer and fur trader John Meares, who sailed along the Northwest Coast in 1788.

Meares named the headland Cape Lookout, but regional nautical charts in 1850 and 1853 mistakenly applied the name to a cape ten miles south, slightly higher in elevation and towering approximately 400 feet above the sea. The name on the south cape stuck, and George Davidson of the Office of Coast Survey renamed the northern headland Cape Meares in 1857.

In January 1886, Congress introduced a bill for a lighthouse at Cape Meares. When the Army Corps of Engineers sent James S. Polhemus to investigate both Cape Lookout and Cape Meares as possible sites, he determined that Cape Meares would be the better site. It was lower in elevation and thus less subject to fogs than Cape Lookout, and it had a freshwater spring.

Congress authorized the Cape Meares lighthouse in 1887 and approved $60,000 for its construction. Richard Leaman of Portland won the $26,000 contract for the keepers’ dwellings, the oil houses, a barn, and a cistern. Willamette Iron Work in Portland supplied the metalwork, and Charles B. Duhrkoop received the $2,900 contract for the lighthouse tower. Construction began in spring 1889 after a wagon road was built to the site. Leaman finished the outbuildings by November, and Duhrkoop completed the tower, with lens in position, on December 23, 1889.

The stout octagonal tower, the only one of its kind on the coast, is made of sheet iron lined with bricks that were kilned at the site. It sits on a ledge carved from the cliff’s solid rock. Only 38 feet tall—the shortest lighthouse in Oregon—its light could be seen for 21 miles out to sea. The lighthouse also had two seven-room keepers’ dwellings located up the hill from the lighthouse tower.

Cape Meares Lighthouse boasted a first-order Fresnel lens, made in France by the Henry-Lepaute firm. It was shipped around Cape Horn to Cape Meares, and the prisms for the eight-sided lens were hoisted up the 200-foot cliffs by a hand-operated crane built of local spruce timbers. Cape Meares’ signal was fixed white, with a red flash each minute. The lens rested on brass chariot wheels, the four primary lenses surrounded by the four bullseye panels covered with ruby glass. Head Keeper Anthony Miller first lit the light on January 1, 1890. In 1910, the original bronze lamp was replaced with an oil vapor lamp, but the keepers still had to wind the clockwork machinery that turned the lens every four hours, by hand. Cape Meares Lighthouse was electrified in 1934.

Cape Meares Lighthouse was automated in April 1, 1963, and the Fresnel lens was decommissioned. The Coast Guard erected a modern light in a small building nearby and began discussing the demolition of the tower. Local residents resisted, and the Coast Guard leased the tower to Tillamook County in 1964. Without resident caretakers, the lighthouse was heavily vandalized, including the theft of the four ruby bullseye lenses.

In 1968, Tillamook County turned its lease over to the Oregon Parks and Recreation Department, which tore down the dilapidated keepers’ dwellings, renovated the lighthouse, and built a replica of the 1895 workroom. The lighthouse was reopened to the public on Memorial Day 1980. The stolen bullseye lenses were recovered, one in a Portland drug raid in 1984, another left at the Tillamook County Pioneer Museum in 1986, and a third a week later at the house of Cape Lookout assistant park manager Michael Hewitt.

Vandals damaged the Fresnel lens again in January 2010, when gunshots pierced fifteen panes of glass in the lantern room and several prisms in the lens. Repairing the lenses would have cost $500,000, but instead the lenses were glued and stabilized. In 2017 the Parks Department replaced the original red lucite lenses with red plexiglass, as replacing the damaged originals was deemed too costly. The total cost for stabilization and replacement was about $48,000. Friends of Cape Meares Lighthouse and TLC Federal Credit Union spearheaded the public fundraising. Unfortunately, as of 2019 the stabilized lens pieces began to deteriorate, and repair options are under consideration. The Coast Guard discontinued the modern light at Cape Meares on June 25, 2014, leaving it dark for the first time in 124 years. 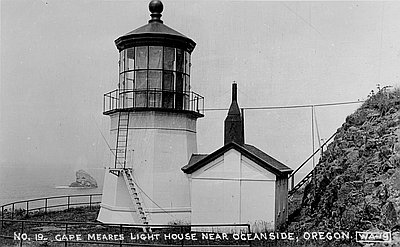 "It would be one of the biggest and finest resorts of the Pacific Northwest. The seal rocks…will vie in fame with the nationally known 'Seal Rocks' of the Cliff House, at the Golden Gate, San Francisco." Those were the dreams of Oceanside's founders, the brothers H.H. and J.H. Rosenberg, when …