With roots stretching back to 1862, Union is situated on Catherine Creek at the southern edge of the Grande Ronde Valley. The town was strategically sited for the transfer of freighted goods being moved between the Columbia River and the mining districts of eastern Oregon. Union, the City of Victorian Heritage, has maintained much of its late nineteenth century charm into the twenty-first century. The town's population in 2016 was 2,150.

For centuries, the Grande Ronde Valley was used as a summer campsite for Native peoples, including the Nez Perce, Cayuse, Umatilla, Walla Walla, and Shoshone. Reportedly, tribes would suspend intertribal rivalries while camping in the Valley of Peace, where they would hunt, forage, fish, and bathe in the hot springs.

The valley was resettled in 1862 by whites, attracted by the moderate climate and the potential to grow fruit trees. Conrad Miller built the first cabin in the area in 1862 and then trekked to Vancouver to purchase fruit trees, which he planted in the Grande Ronde Valley. Miller’s apple and pear trees laid the foundation for the orchard industry in the valley, which is still thriving today.

After the first influx of resettlers—approximately nine families—John Andrew Jackson Chapman built a store along Catherine Creek at the southern edge of the valley to serve as a supply center. The store would become the nucleus for the town of Union, which was platted in 1864. The name of the town was a demonstration of loyalty and support to the Union during the Civil War.

The town of Union grew rapidly, attracting over a hundred residents in its first year. The town's growth was helped by the completion of a toll road built by James Pyle through a nearby canyon (subsequently called Pyle Canyon) to the Powder River Valley. The road, in conjunction with a road to La Grande and another to Summerville, made Union into an important stopping place for travelers, miners, and freighters. Many resettlers stayed in the region to take advantage of land that was well suited to agricultural production. Union also served as a shipping point for mining districts in Eagle Creek, Baker County, and eastern Idaho, which added to its early prosperity.

When Union County was carved out of Baker County in 1864, La Grande was named the county seat. The continued growth of Union, however, coupled with a political maneuver that resulted in stagecoach operations traveling through Union rather than La Grande, led to the relocation of the county seat to Union in 1874.

The Oregon Railway & Navigation Company bypassed Union when it built a railroad through the Grande Ronde Valley in 1885. The town responded by building a two-mile connecting line in 1891-1892, but not being on the trunk line considerably stalled Union’s growth. Despite gradual population loss, Union held the county seat until a vote in 1904 relocated the seat back to La Grande, where it has remained ever since.

During the late nineteenth century, Union was noted for the beauty of its main avenue and the variety of trees that grew alongside it. Main Street, as described in An Illustrated History of Union and Wallowa Counties (1902), "extends for nearly one mile, due north and south, through the heart of the city and along its entire length is bordered on each side by stately rows of poplars, cottonwoods, oaks and alders, forming a bower of verdure unsurpassed in eastern Oregon." Today, Union's Main Street and the many Victorian homes found along it form the core of the town's National Historic District and have inspired the town’s nickname, the City of Victorian Heritage.

Union was given a Carnegie Library in 1912, which retains its original structure and still functions as a library. In 1921, the sixteen-room Union Hotel opened its doors on Main Street and remains in business today as the Historic Union Hotel. Other historic attractions include the Union County Museum and the Abel E. Eaton house, a French Second Empire-style house listed on the National Register of Historic Places. Abel Eaton built the house in 1904 with money from a fortune he had made operating a woolen mill in Union. Eaton was also the town’s mayor, a school board member, and a Prohibitionist candidate for governor.

Each June, the Eastern Oregon Livestock Show opens for business in Union. The show, founded in 1908, claims to be the oldest livestock show in the Northwest. Over the years, the traditional industries of agriculture and timber have been complemented by tourism and outdoor recreation in the Blue and Wallowa Mountains and at Catherine Creek State Park.

Union came to some national attention in 2006 when Kyle Corbin, an eighteen-year-old college student, successfully ran a write-in campaign to become the mayor. The town had been in political turmoil because of bickering council members and the recall of the mayor; Corbin was elected on a promise to bring unity to Union. He declined to seek a second term.

An Illustrated History of Union and Wallowa Counties, with a Brief Outline of the Early History of the State of Oregon. Spokane, Wash.: Western Historical Publishing Company, 1902. 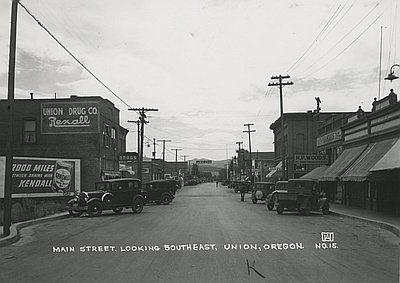 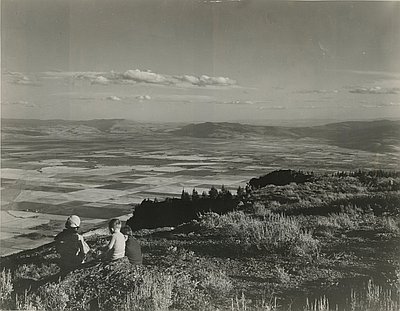 La Grande, the seat of Union County, is nestled in the eastern foothills of the Blue Mountains. Situated in the Grande Ronde Valley, La Grande is the third largest city in eastern Oregon, with an estimated population of 13,340 in 2018.

On March 27, 1890, the Union Electric Light and Power Company was incorporated to build what may have been Oregon’s shortest short-line railroad. The goal was to build a line linking Union, in northeastern Oregon, with the Oregon Railway and Navigation Company mainline, which had bypassed the town in 1884. …