The Blue Mountains, perhaps the most geologically diverse part of Oregon, consist of a series of mountain ranges, rolling uplands, and valleys in the northeastern part of the state and extending into southeastern Washington. Slightly less than a sixth of Oregon's land area, the region occupies about 15,000 square miles. The precise boundaries of the Blues, as they are often called, are indistinct, but the western extent roughly coincides with the western edge of the Ochoco and Maury Mountains and the eastern edge with the Snake River in Hells Canyon. The Blue Mountains also include the Greenhorn Range and the Aldrich, Strawberry, Elkhorn, and Wallowa Mountains (Figure 1). Elevations range from about 3,000 feet in the valley bottoms to higher than 9,800 feet at Sacajawea Peak in the Wallowa Mountains. This rugged landscape and its geology have influenced nearly all aspects of human history in the region, from the homelands of Native peoples, to the migration routes of resettlers, to the location and types of natural resources.

The Blue Mountains landscape resulted from the erosion of bedrock as it was uplifted during about the last 15 million years. In some places, such as the north side of the Wallowa or Strawberry Mountains, faulting localized the uplift, visible today as abrupt and straight mountain fronts. Glaciers scoured high elevation areas, leaving behind deposits of till in the Wallowa and Greenhorn Mountains. The bedrock itself tells a story. From oldest to youngest, it consists of three main parts: the basement complex, which lies beneath everything else; granitic intrusive rock; and younger volcanic and sedimentary rock, which sits on top of the basement and intrusive rock (Figure 2).

The basement complex consists of several fragments of continental and oceanic lithosphere. These fragments, called terranes, are bound on all sides by faults and have their own geologic histories distinct from adjacent terranes, which originated in a variety of oceanic settings during the late Paleozoic and early Mesozoic eras. The Wallowa and Olds Ferry terranes originated as island arcs, the Baker Terrane as one or more subduction zone complexes, and the Izee Terrane as a marine basin that developed over the top of the older terranes. Some limestone within these terranes contains fossils of organisms that appear to have lived only in the ancient Tethys Ocean, which was near the site of today’s Mediterranean Sea. While this observation may seem implausible, these fossils likely arrived in Oregon via large-scale plate movements. Similarly, from the late Jurassic through Middle Cretaceous Periods, the Blue Mountains terranes were added to the edge of North America through the process of subduction.

Intruding these accreted terranes are granitic bodies, called “stitching plutons” because they cut across many terrane boundaries and appear to stitch them together. The ages of individual stitching plutons place constraints on when two terranes joined. The Bald Mountain Batholith in the Elkhorn Mountains, for example, contains granitic rock as old as 155 million years. It intrudes both the Wallowa and Baker terranes to indicate that they came together before then. Hot fluids emanating from these intrusions deposited gold, silver, and a variety of other minerals in the older rock of the accreted terranes.

Volcanic and sedimentary rock overlies the accreted and intrusive rocks to present a variable spectacle of Oregon’s history over about the last 100 million years. Exposures of Cretaceous rocks in the central and western Blue Mountains, for example, point to a river in the east that flowed westward into the nearby ocean. The Clarno and John Day Formations, best known from John Day Fossil Beds National Monument, were deposited from about 48 to 22 million years ago and indicate changes in volcanic activity and climate.

The Clarno Formation formed from tropical stratovolcanoes in central Oregon, whereas the John Day Formation reflected a climate that cooled from subtropical to temperate and consists largely of ash erupted from volcanoes to the west. These rock units also host a world-class trove of mammal and plant fossils that similarly indicate a cooling climate. Above the Clarno and John Day Formations lie lava flows of the Columbia River Basalt Group (Figures 2 and 3). These lavas, which covered more than 70,000 square miles of Oregon, Washington, and western Idaho, mostly originated as fissures near the eastern edge of the Blue Mountains, although those in the John Day and Prineville areas came from more local sources.

Natural resources of the Blue Mountains include gold, chromite, timber, and geothermal energy. Gold formed lode deposits near margins of stitching plutons, where hydrothermal fluids moved along fractures in the rock and precipitated minerals in veins. Where these deposits were eroded, gold particles formed placer deposits in river gravel. Miners worked both lode and placer mining claims beginning in 1862. Districts in the Elkhorn Mountains produced the most lode and placer gold of the entire region, more than mines in either the Wallowa or the Greenhorn Mountains.

Chromite mining produced chromium, a strategic metal important for increasing the hardness and corrosion resistance of steel. The most active mining periods in the Blue Mountains, therefore, coincided with World War I and World War II. Because chromite concentrates as lens-shaped bodies in the low-silica intrusive rocks of the Earth’s mantle, its ore bodies lie mostly in the Baker accreted terrane. The most productive chromite mining occurred near Canyon City on the northwest side of the Strawberry Mountains.

Some 65 percent of the Blue Mountains is classified as forestland, with lodgepole pine, sub-alpine fir, and mountain hemlock dominating higher elevations, ponderosa pine and Douglas-fir mostly at middle elevations, and western juniper at lower elevations. By the mid-1920s, timber harvesting had become critical to many local economies in the region. According to the Oregon Department of Forestry, Grant County, for example, produced more than 22 million board feet of lumber in 1925, a quantity that increased tenfold by 1965. After 2000, timber harvesting declined substantially in counties throughout Oregon.

Geothermal resources of the Blue Mountains tend to be reliable but of relatively low temperature. Probably the best known areas are near La Grande, where hot springs attract tourists and provide some heating support to buildings. These areas include Hot Lake Springs, south of La Grande, and Ritter and Lehman Hot Springs, both west of La Grande. Lehman Hot Springs is presently not open to the public.

Living in the Blues

The Cayuse people lived for millennia in the western and central Blue Mountains, while the Nez Perce had their homeland in northeastern Oregon, southeastern Washington, and western Idaho. Tenino, Umatilla, and Northern Paiute peoples occupied lands that reached deep into the region along watersheds such as the John Day and Umatilla Rivers. They otherwise lived on the edges of the Blues and hunted and gathered plants seasonally in the piedmont and mountainous sections.

Beginning in the early eighteenth century, the Cayuse, Umatilla, and Nez Perce acquired horses, which made it possible for them to travel well beyond the Blue Mountains to hunt. They also fished local rivers and streams and gathered berries and other plants as part of seasonal rounds, practicing widespread burning to clear underbrush and enhance food production. It was the smoke from those agricultural fires that gave the Blue Mountains their name, as it cast a distinctive blue haze over the mountains. Along with the Walla Walla, who live primarily in Washington, the Cayuse and Umatilla are part of the Confederated Tribes of the Umatilla Indian Reservation, headquartered in Pendleton.

Thousands of emigrants traveled west on the Oregon Trail in the mid-nineteenth century, following a route that Interstate 84 follows closely across the Blue Mountains. Perhaps the most difficult stretch of the trail was the descent from Deadman Pass into the broad valley occupied by the Umatilla River and the city of Pendleton. The route crossed several fault zones, each of which dropped their northwest sides downward to make an especially steep descent. Today, this stretch of interstate is considered one of America’s most dangerous roadways. Most of the cities and larger towns in the Blue Mountains lie along this route, including Baker City, originally a focus of gold mining and incorporated in 1874, and La Grande, a waypoint on the Oregon Trail incorporated in 1865. The smaller towns of Canyon City, incorporated in 1891, and John Day, incorporated in 1901, are off the Oregon Trail and were created in part to support mining.

Chiasson, A. "The Economic, Environmental and Social Benefits of Geothermal Use in Oregon." Geo-Heat Center Quarterly Bulletin 30 (2011): 1-11.

Ruby, Robert .H., and John A. Brown. A guide to the Indian Tribes of the Pacific Northwest, revised edition. Norman: University of Oklahoma Press, 1992. 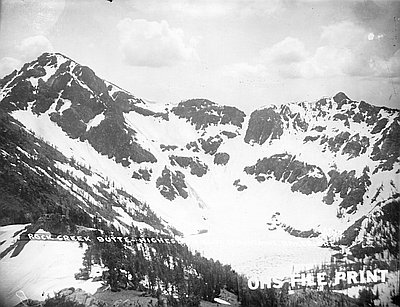 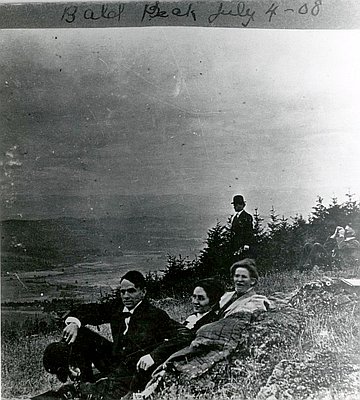 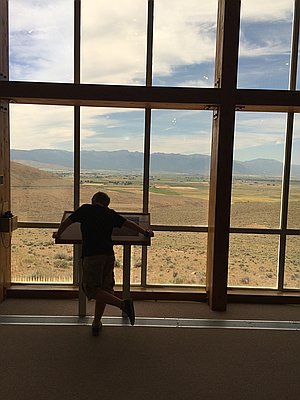 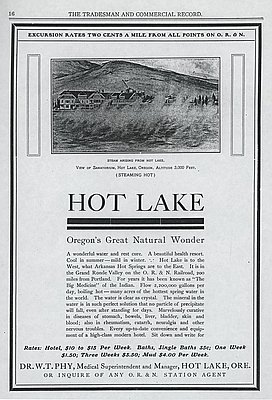 Chromite is a mineral that contains chromium. It is considered a strategic mineral, which generally means that it is necessary for military and industrial use during periods of national emergency. The strategic mineral concept was created during World War I and became law just prior to World War II with the …

Located between John Day and the Elkhorn Mountains, the Greenhorn Mountains are a low uplift within the Blue Mountains. Their highest point is Vinegar Hill, at 8,300 feet. The town of Greenhorn, at 6,300 feet in elevation, is Oregon’s highest incorporated city. It served as a gold-rush boomtown from the 1865 …

The town of Joseph, situated at the base of the Wallowa Mountains at the southern edge of the three valleys of the Wallowa River, is the cultural and tourism center of northeastern Oregon. The striking beauty of the town’s natural surroundings lent it the nickname Little Switzerland of America. That moniker …

La Grande, the seat of Union County, is nestled in the eastern foothills of the Blue Mountains. Situated in the Grande Ronde Valley, La Grande is the third largest city in eastern Oregon, with an estimated population of 13,340 in 2018.

The Strawberry Mountains—among the highest peaks in the Blue Mountain Range—extend east-west through northeast Oregon in Grant County, south of the John Day Highway in the Malheur National Forest. Along with the Aldrich Mountains to the west, the Strawberry Mountains have been uplifted and shoved north along the now-inactive John …