The skyline of Baker City, at an elevation of 3,440, is dominated by two mountain ranges, the Elkhorns on the west and the Wallowas on the east. It is arguably the most picturesque setting of any town on the Oregon Trail. Yet, as a potential town site at the southern end of fertile Baker Valley, tens of thousands of people heading for “Oregon or Bust” passed through without settlement. That changed when four miners—Henry Griffin, David Littlefield, William Stafford, and G.W. Schriver—discovered gold in October 1861, a couple of miles south of present-day Baker City.

By September 1862, the Oregon legislature had carved off the eastern edge of Oregon to create Baker County. The county seat was Auburn, a mostly tent city that had mushroomed to over four thousand miners during the summer. By 1865, the gold had played out, and the town’s population had dwindled dramatically. That year, several miles to the north, attorney Royal A. Pierce platted land that would become the heart of Baker City. William F. McCray, Auburn’s first postmaster, moved his post office and variety store to the new town’s Front Street. The next year, Baker City was named the new county seat. The city was incorporated in 1874, when the legislature approved the city’s charter. Both Baker City and Baker County were named to honor Edward Dickinson Baker (1811–1861), Oregon’s first senator and the only sitting member of Congress killed in the Civil War.

Baker City soon became the center of commerce for Baker County. When the Oregon Railway & Navigation Company and the Oregon Short Line, a subsidiary of the Union Pacific, linked up near Huntington on November 12, 1884, Baker City gained access to the markets in Portland and the West Coast and to Omaha and points east.

In 1889, David Eccles, Charles W. Nibley, and George Stoddard incorporated the Oregon Lumber Company, with a large mill on the south side of Baker City. They began construction of a narrow gauge railroad, the Sumpter Valley Railway, to haul logs from the ponderosa forests southwest of town. Extending its track by stages over the next twenty years, the railway connected Baker City to Prairie City, forty miles away in Grant County over eighty miles of track. SVRy’s track reached Sumpter in 1896, thirty miles southwest of Baker City, and facilitated a boom in hard-rock mining. The so-called gold belt, mostly in Baker and Grant Counties, produced about 60 percent of all gold and silver mined in Oregon.

During the 1880s and 1890s, Baker City’s wood-frame structures gave way to brick and stone buildings, giving the downtown a Victorian appearance. Primarily responsible for the change in architecture and the prosperity of the community were local Jewish businessmen, including Carl Adler, Herman Bamberger, Isaac Bloch, Carl and Mose Dilsheimer, Isador and Mose Fuchs, Sigmund Heilner, Mose and Sol Tichner, and Maximillian Weil.

In the 1890s and well into the twentieth century, Baker City was known as the Queen City of the Inland Empire. In 1900, it was the third largest city in Oregon, the sixth largest in 1910, and the fifth largest in 1920, before other growing cities reduced its standing. With a population of 9,890 in 2016, Baker City is by far the largest town in Baker County. Until about 1900, it was one of the only cities between Salt Lake City and Portland to host famous traveling theater and opera companies.

From its earliest years, Baker City had a small Chinese population who lived on Auburn Street between Resort Street and Powder River. That one-block section of town was adjunct to the hundreds of Chinese miners who lived and worked in Baker County. The block had a brick joss house (temple), several businesses, and quite a few prostitution cribs. Some Chinese operated laundries and restaurants in the downtown area. On the east side of Baker City, the Chinese maintained their own cemetery; almost all of the remains were returned to China, but one marked grave remains as part of a memorial to the Chinese community. Most Chinese residents had left the city by the early 1940s.

Japanese began settling in Baker City in the early 1900s, working in restaurants and hotels and on the railroads. Some ran restaurants and sold vegetables from a large garden on the east side of the Powder River. They did not live in a separate section of town but in the general community. But when Japan attacked Pearl Harbor on December 7, 1941, many Baker City citizens and employers no longer wanted to be served by or patronize businesses employing or owned by Japanese or Japanese Americans. By the end of 1942, no Japanese lived in Baker City. Most had moved to neighboring Malheur County to find employment in agriculture.

Baker City is the headquarters of the Wallowa–Whitman National Forest, which administers most of the nearby timberland. During the twentieth century, federal timber fed three lumber mills in the town, but the mills closed as the supply of big logs and lumber prices dwindled. Ellingson Lumber Company, Baker City’s last big-log lumber mill, closed in 1996.

Baker City is now a center of local tourism, with visitors attracted by nearby ghost towns, the Elkhorn Mountains, the Anthony Lakes Ski Area, the Eagle Cap Wilderness Area, the Hells Canyon Recreation Area, and the Snake River. The Miners Jubilee is held each year, and rodeos entertain in Baker City, Haines, and Halfway. Baker City also has an authentic Victorian business district, which is on the National Register of Historic Places, including the historic Geiser Grand Hotel. On the outskirts of Baker City is the National Oregon Trail Interpretive Center, which opened in 1992 and is administered by the Bureau of Land Management.

In 1910, Baker City residents voted to change the name of the town to Baker, but after another vote in 1989 the official name was changed back to Baker City. 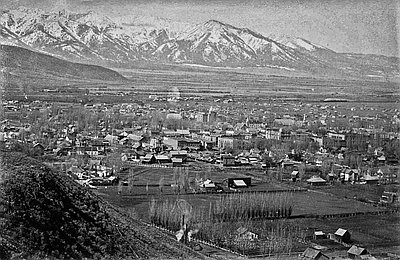 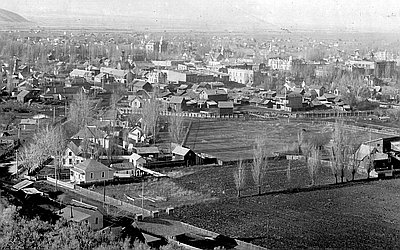 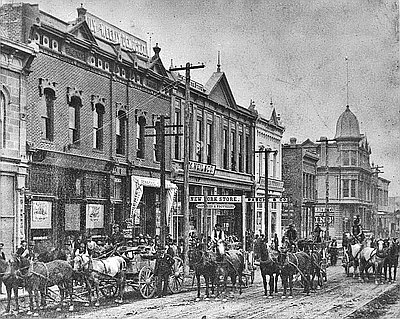 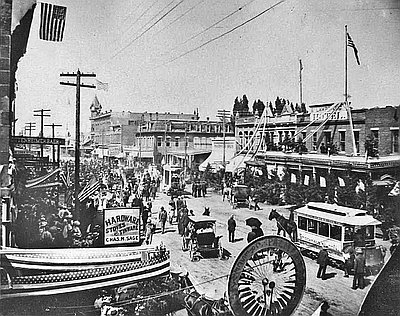 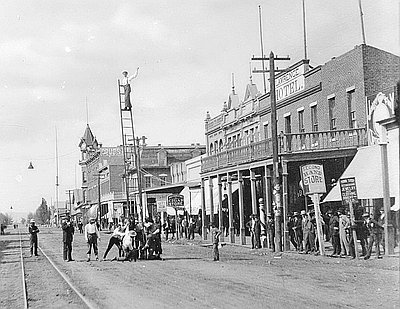 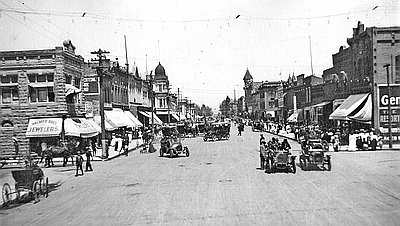 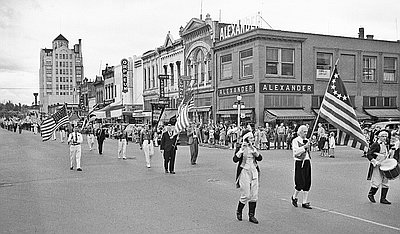 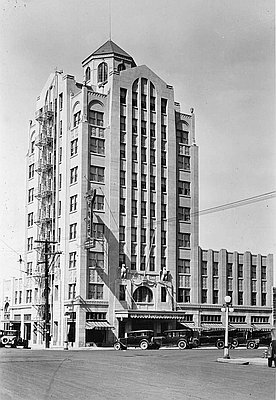 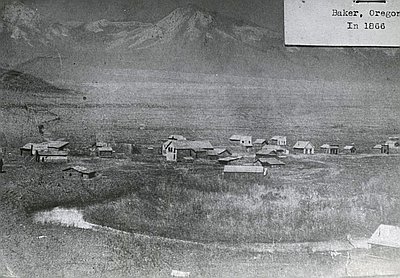 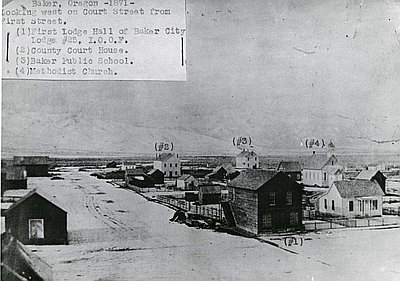 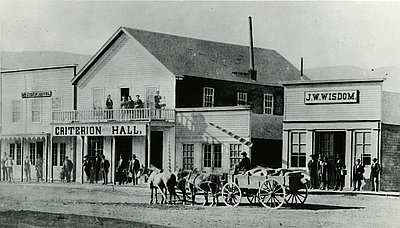 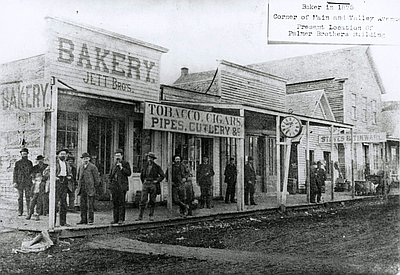 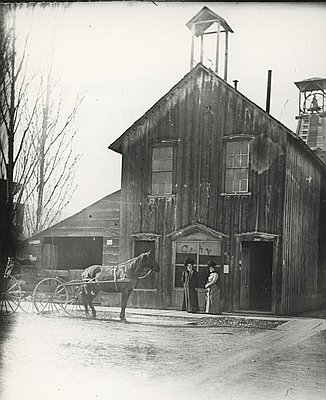 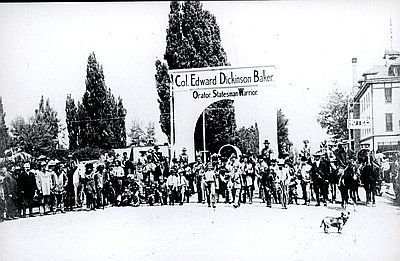 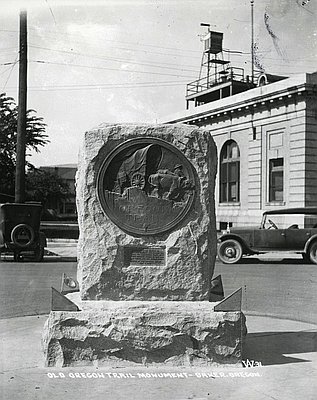 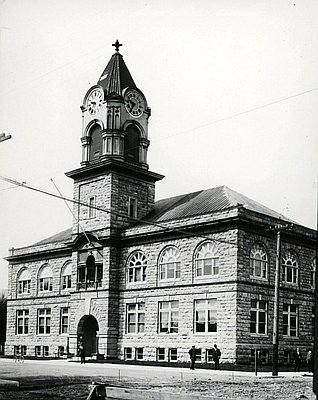 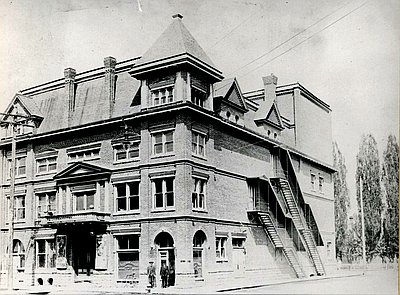 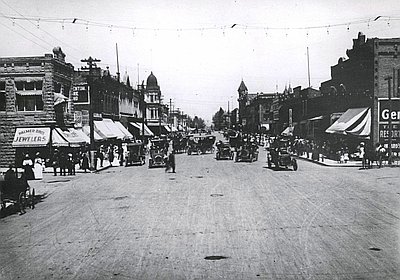 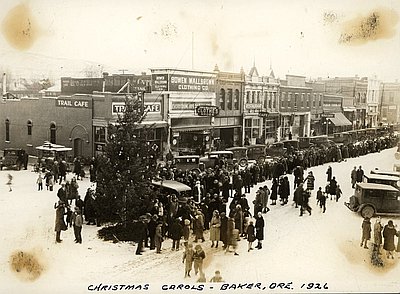 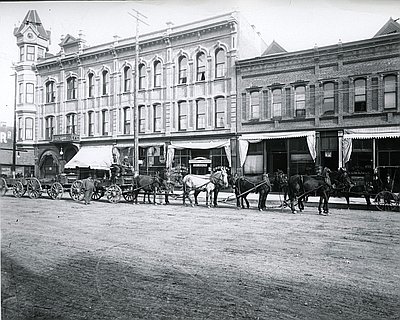 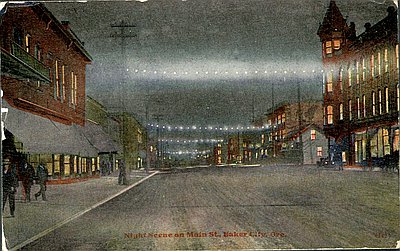 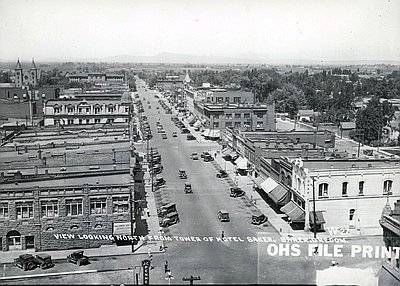 Dielman, Gary. 12 essays about Baker City may be accessed via the Baker County Library's website: http://www.bakerlib.org/photo-archive/dielman-local-history-files.html

The Baker City Street Railway Company began operation on June 4, 1890, with two cars and six horses. The enterprise was initially headed by John Geiser, whose family owned the largest gold mine in the Northwest.

For a decade, horse-drawn streetcars provided transportation between the train stations and downtown hotels, …

On June 23, 1906, at a meet in Spokane, Washington, Dan Kelly, a freckle-faced, redheaded University of Oregon sophomore from Baker City, stunned the track-and-field world. Running under the sponsorship of the Multnomah Athletic Club in Portland, Kelly broke the sixteen-year-old 100-yard dash world record, sprinting the distance in 9.6 …

As early as 1871, James William Virtue—one-time sheriff of Baker County—was recognized nationally for his expertise as a miner when President Ulysses S. Grant appointed him U.S. centennial commissioner. His charge was to help plan "an international exhibition of arts, manufactures, and products of the soil and mine," to be …

Leo Adler was an innovative seller of newspapers and magazines, a self-made millionaire, and a strong advocate first of Baker and then Baker City, Oregon (the town changed its name in 1989).  His work and enthusiasm may have its strongest impact on Oregon through the work of the Leo …

The National Historic Oregon Trail Interpretive Center is located five miles east of Baker City, along a stretch of ruts left by the wagons of Oregon Trail emigrants. The 509-acre site sits atop Flagstaff Hill (the namesake of the Flagstaff gold mine located beneath the hill) and overlooks the route …

The Sparta Ditch, a thirty-two-mile-long irrigation ditch straddling the Union-Baker County line, was built in 1871 to facilitate gold mining in that area. The ditch begins on the U.S. Forest Service Pine Ranger District, eight miles northwest of the unincorporated town of Sparta. It is a tangible example of the …