The Sparta Ditch, a thirty-two-mile-long irrigation ditch straddling the Union-Baker County line, was built in 1871 to facilitate gold mining in that area. The ditch begins on the U.S. Forest Service Pine Ranger District, eight miles northwest of the unincorporated town of Sparta. It is a tangible example of the contribution made by Chinese laborers in northeastern Oregon whose ditch systems, flumes, and tunnels supplied water for local mining concerns.

In October 1871, five months after the ditch project began, a crew of three hundred Chinese miners, recruited from the China Companies’ labor pool in Baker City, diverted water from the snowpacked peaks and high mountain valleys of what is now the Eagle Cap Wilderness Area. Using Eagle Creek, they diverted water to the Thorn Gulch mines in the Wallowa-Whitman National Forest.

The project was managed and funded by the Eagle Canal Company, formed in 1869 to study the viability of the Sparta Ditch and other mining waterworks excavations projects in the area. Baker City investor William H. Packwood was instrumental in developing the projects. The company hired Charlie Awah, a Chinese interpreter, to write letters to secure labor from China Companies, a general term used for independent Chinese labor contractors.

Crews from Baker City and Auburn, under the supervision of Ah Fat, began work on two miles of the ditch in May 1871; another section was contracted to supervisor Le Tew. The terms of the contracts stipulated that payment would not be made until three to six months after the ditch was completed and water had reached Rattlesnake Gulch above the present town of Sparta. As a result, the laborers worked without remuneration for up to eleven months. The ditch used flumes and tunnels that a non-Chinese crew had dug along a vertical rock wall from 1869 to 1871. The Chinese crew then dug by hand through thirty miles of rock.

Packwood established the town of Sparta, eight miles from the ditch site, in 1870 or 1871. The ditch crew and the miners who were reworking nearby Eagle Creek placer mining claims contributed to the increase in the town’s Chinese population. By the late 1870s, the town had between 1,000 and 1,200 Chinese residents.

An established Chinatown supported three Chinese stores, including Tong Wa and Company and Wing Chung and Company; a temple; a Chinese doctor; a laundry; gambling establishments; and a bordello. A Chinese cemetery on a ridge close to town still has pits marking the sites of remains that were disinterred and returned to China by the Chinese Consolidated Benevolent Association. The association’s eastern Oregon members paid the dues for burials, including the return of exhumed remains to China. Some residents of Sparta’s Chinatown experienced anti-Chinese violence, which was prevalent throughout Oregon during this period.

The mining industry declined significantly beginning in the late 1880s, and the town of Sparta declined with it. By 1920, the ditch was no longer being used by miners and instead was used by local farmers to irrigate their land. By the time the U.S. Forest Service filed its cultural assessment report of the area in 1979, the ditch was mostly unusable for irrigation. Although parts of the original ditch are still visible on the landscape, much of it has been damaged by erosion, road construction, and logging. 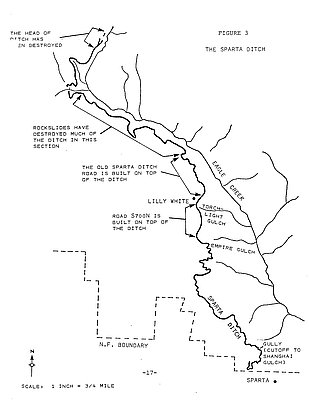