The short-lived mining town of Auburn was in the Blue Mountains in Baker County. After gold was discovered on Griffin Creek in October 1861, thousands of miners rushed to the Blue Mountains and parts of Idaho where similar gold strikes were made. One of the first mining camps was located in the Blue Canyon district south of Griffin Creek, about eight miles southwest of present Baker City. In June 1862, the town was laid out and named Auburn. The reason for the name is unknown, although it is likely that it was named by miners who came from the gold mining town of Auburn, California.

A number of buildings were built, and by fall 1862 it was one of the largest towns in eastern Oregon. Auburn was named the county seat of Baker County in September, and the first post office in northeastern Oregon was established there in November. In 1863 the population was estimated at about 6,000, mostly men.

Auburn declined rapidly as the placer miners left for other goldfields or settlements, and by December 1864 there were only 150 residents left. In 1868 the county seat was moved to Baker City, which was on the main transportation route and was becoming a center for cattle, grain, and timber products.

For the remainder of the 1800s Auburn was nearly deserted, although it continued to have a post office until 1903. By the 1940s no buildings were left in Auburn, and all traces of the town have virtually disappeared. 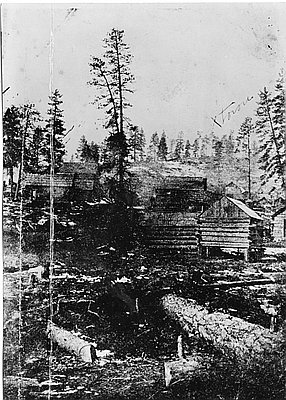