Edward "Ned" D. Baker, who was born in London, England, on February 24, 1811, immigrated with his family to the United States at age five. When he was a teenager, his parents moved to Illinois, where Ned Baker later read law. At twenty, he married twenty-two-year-old Mary Ann Lee, a widow with two children. Four other children were later born to the couple.

In 1835, Baker relocated to Springfield to practice law. There, he and Abraham Lincoln became well known as young lawyers and enthusiastic evangelists for Whig politics. Baker's oratorical talents blossomed early, helping him achieve election to the Illinois Assembly in 1837.

Baker was elected to the U.S. House of Representatives as a Whig, serving from 1845 to 1847. Unlike Lincoln, he zealously supported the acquisition of Oregon and the declaration of war against Mexico. Resigning his seat in Congress, Baker helped raise and lead a regiment to fight in Mexico. Injured, he returned to Illinois and was reelected to the House for a term beginning in 1849. He absented himself from Congress to secure a group of workers to help build a railroad in Panama.

In 1852, Baker moved to San Francisco to help establish the Whig Party in that new Democratic state. By 1856 he had joined the new Republican Party. Twice he unsuccessfully sought election to Congress. Baker subsequently accepted an invitation from Illinois friends David Logan and Dr. Anson G. Henry, who were now living in Oregon, to help further the Republican cause in that state.

Baker arrived in Oregon in the winter of 1859-1860. By working strategically with Douglas Democrats, he won one of the first U.S. senatorial seats from Oregon in 1860. At the same time, his close friend Abraham Lincoln was elected president.

Without sundering their friendship, Baker broke with Lincoln on the issues of popular sovereignty and political compromise. In California and Oregon, he needed bipartisan backing from moderate Democrats to further his own political cause. To that end, he supported Stephen A. Douglas and his concept of popular sovereignty, which allowed territories to decide their own future on slavery and other issues. Baker also spoke for compromise measures that Lincoln rejected in the winter of 1860-1861 to head off a civil war.

Taking his seat in the U.S. Senate in December 1860, Baker introduced Lincoln at his first inauguration in March 1861. He asked for and received permission to raise and lead a regiment in the war. Baker was killed at the Battle of Ball's Bluff on October 21, 1861, the only member of Congress to die in battle in the Civil War. 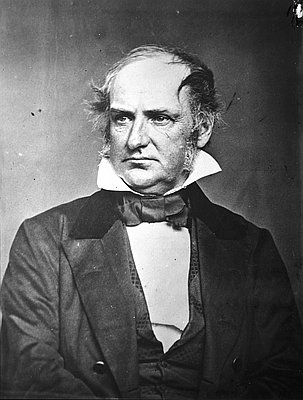 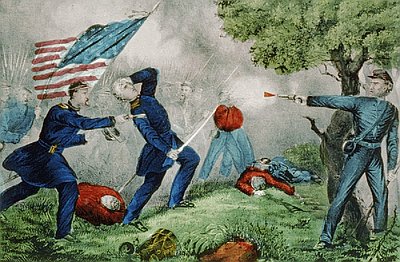 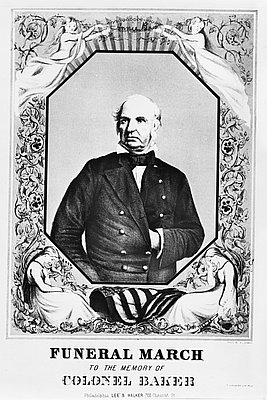 Johannsen, Robert W. Frontier Politics and the Sectional Conflict: The Pacific Northwest on the Eve of the Civil Era. Seattle: University of Washington Press, 1955.

The presidential election of 1860 was a turning point in Oregon political history. Oregon had become a state in 1859, and it was the first national election in which Oregonians participated. The election also increased the visibility of the Republican Party in the state and introduced far-western residents to Abraham …