Yaquina Bay Lighthouse, built in 1871, is the only wooden lighthouse in Oregon and is believed to be the oldest structure in Newport. The lighthouse was decommissioned in 1874.

In February 1869, the Oregon legislature sent a memorial to the U.S. Senate petitioning for a lighthouse at the mouth of Yaquina Bay to guide traffic into the harbor at Newport, one of the busiest harbors between San Francisco and Seattle. The U.S. Lighthouse Board agreed that a lighthouse was necessary, but a controversy erupted over whether a lighthouse would be more appropriate on Yaquina Bay to guide local crafts or on Yaquina Head to focus on coast-going maritime traffic. The board’s decision to provide an aid to Newport’s commercial interests settled the matter, despite the advice of Colonel R.S. Stockton, the Lighthouse Service district engineer, who argued that a harbor light on the bay would be less useful than a more powerful first-order light on Yaquina Head.

Congress appropriated funds for the Yaquina Bay Lighthouse, and the Lighthouse Board purchased thirty-six acres on a promontory overlooking the sea on the north side of Yaquina Bay for $500 (about $9,500 in 2019 dollars) from homesteaders Lester and Sophronia Baldwin. Construction began on May 1, 1871. Ben Simpson, who lived in Newport, built the lighthouse tower and the two-story wooden building that was used as a dwelling. Metal expert Joseph Bien of San Francisco built the lantern room.

The lighthouse beacon, an oil lantern inside a fifth-order Fresnel lens, shone for the first time on November 3, 1871, under the care of its first and only keeper, Charles H. Peirce. A former Civil War captain in the Union Army, Peirce lived with his wife and their children at the lighthouse, where their ninth child was born.

In 1874, the Lighthouse Board reconsidered Colonel Stockton’s advice and decided to build a larger lighthouse on Yaquina Head to serve the growing maritime traffic on the central coast. Yaquina Bay Lighthouse was darkened for the last time on October 1, 1874. The Lighthouse Board tried to sell the station in 1877, but the offer received was so low that the board decided to keep the structure. The building’s outer sheathing was renewed in 1878 to prevent deterioration.

The lighthouse stood empty for fourteen years, until the U.S. Army Corps of Engineers used it as a dwelling for John Polhemus, the engineer who directed the construction of the north jetty at Yaquina Bay from 1888 to 1896. The U.S. Lifesaving Service quartered a crew in the lighthouse beginning in 1906. When the newly formed U.S. Coast Guard took over the property in 1915, it built a steel observation tower, which still stands. The Coast Guard continued to use the lighthouse for crew quarters until 1933, when it was again abandoned.

The lengthy periods of abandonment led to a literary history that gave the lighthouse an ineradicable reputation for being haunted. In 1899, Lischen M. Miller (1858–1915), the sister-in-law of Oregon writer Joaquin Miller, published a fictional story, “The Haunted Lighthouse,” in Pacific Monthly. The Yaquina Bay Lighthouse, Miller wrote, is “the loneliest place in the world” when the afternoon fog drifts in. The gothic tale captured the imagination of readers in Newport and beyond and may have contributed to the successful preservation of the lighthouse. In the tale, Muriel Trevenard was put ashore in Newport during a voyage down the coast because she was not a good sailor. Her gruff sea captain father finds her a room, and she spends most of her time in Newport sketching by the seashore. She joins a group of tourists who visit the abandoned lighthouse, where she is mysteriously murdered. None of her companions find her body or the murderer. “To this day,” the story warns, “the blood-stains are dark upon the floor in that upper chamber.”

The lighthouse and thirty-two acres of the reservation were transferred to the Oregon State Highway Commission in 1934 for a public park and were developed by the Civilian Conservation Corps for public use. In 1946, the commission scheduled the lighthouse building for demolition. The Lincoln County Historical Society tried to save the lighthouse, and local tax measures to raise money for its restoration failed five times. As preparations were being made in 1951 to demolish the building, L.E. Warford, an Ohio industrialist raised in Oregon, spearheaded efforts to get national recognition for the structure. The publicity had its effect, and in 1955 the Oregon Highway Commission leased the lighthouse to the Lincoln County Historical Society, which used it as a county museum for eighteen years.

During the 1970s, the Oregon Parks and Recreation Division, which managed the lighthouse, determined that it could be restored under the Historical Restoration Program. OPRD initiated a complete restoration and listed the lighthouse on the National Register of Historic Places in 1974. The fixed white light, visible for six miles, was lit on December 7, 1996. Now managed by OPRD, the lighthouse is a U.S. Coast Guard privately maintained aid to navigation. 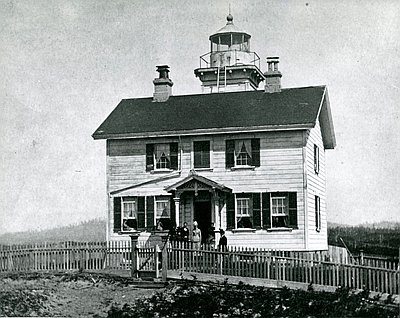 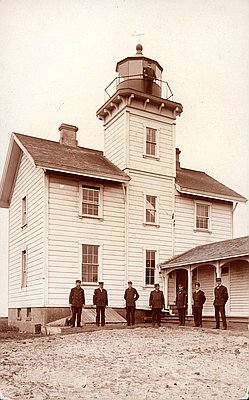 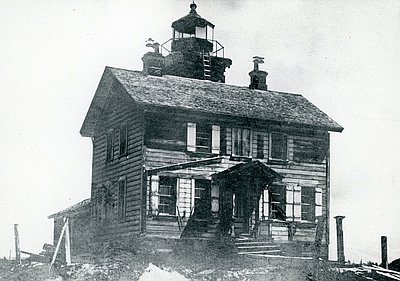 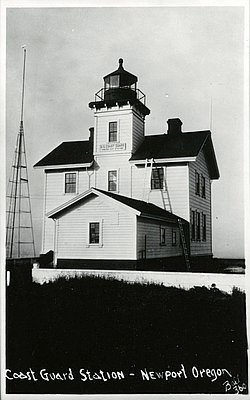 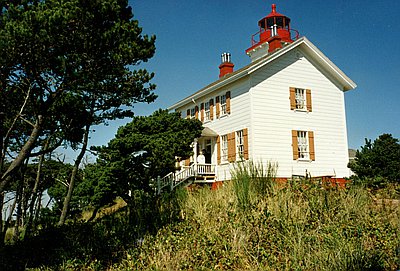 Heceta Head Lighthouse stands 205 feet above the Pacific Ocean on a bluff carved out of the west side of 1,000-foot-high Heceta Head, twelve miles north of Florence. The light shining from the 56-foot-high tower flashes a white beam for eight seconds every minute. Visible for twenty-one miles, it remains …

Newport, with a population of about 10,000, is the largest city in Lincoln County and, since 1952, the county seat. The largest minority population is Hispanic, at about 8.5 percent of the population. Tourism, fishing, and shipping are the major industries.

Situated on the coast west of the Coast Range, …

Point Adams was given its name by Captain Robert Gray, who in his official log entry on May 19, 1792, named the spit of land Adam’s Point. Captain George Vancouver, later that year, referred to it as Point Adams, and the United States Exploring Expedition adopted that version …