Yaquina City was a railroad boomtown on the upper reaches of Yaquina Bay, three to four miles east of Newport on the central Oregon Coast. This briefly flourishing town illuminates many of the challenges of late nineteenth-century coastal transportation by rail and by sea.

Railroad promoter Thomas Egenton Hogg founded the town in the 1880s as the terminus of his promised railroad line between Corvallis and the coast. A forty-three-year-old merchant from Baltimore, Hogg moved to Corvallis in 1871 and incorporated the Corvallis & Yaquina Bay Railroad in 1872. Two years later, he incorporated the Willamette Valley & Coast Railroad to build a longer, narrow gauge line that would extend into eastern Oregon.

Capital was scarce, however, so Hogg and several investors incorporated Oregon Pacific Railroad in 1880 to become the financing guardian of the Willamette Valley & Coast Railroad. He proposed to follow the route of the existing Corvallis and Yaquina Bay Wagon Road, built in the 1860s, and acquired tide and marsh land grants from the state to help finance the railroad. Ultimately, Hogg floated the idea of Corvallis as the center of a transcontinental railroad—routed over the steep and dangerous Cascade Mountains—from which commercial traffic would sail out of Newport for San Francisco, avoiding the long transshipment to Portland. Corvallis residents enthusiastically supported the plan. The only part of the scheme that became reality, however, was the railroad from Corvallis to Yaquina Bay. Construction began in September 1881, with Chinese laborers doing the majority of the construction work, and the first train arrived in Yaquina City in March 1885.

Hogg owned all of the land along the north bank of Yaquina Bay to Newport, and it is unclear why he decided to establish Yaquina City as the railroad terminus rather than continue his line to Newport. One account contends that Hogg offered Newport some $50,000 for land on the bayfront to build docks and warehouses for his enterprise, but was turned down.

Yaquina City flourished during the 1880s. The town began its boom period in about 1882, when entrepreneurs from Newport established businesses there. The post office opened in 1885, and Collins van Cleve moved to Yaquina City from Newport in 1882 to start the Yaquina Post, which he published for fourteen years. The town boasted a bank, two schools, hotels, several grocery stores, restaurants, a dry goods store, at least seven saloons, salmon canneries, a sawmill, and two churches. With some two thousand residents by the 1890s, it was the largest population center in Lincoln County. The first meeting of the Oregon Newspaper Publishers Association and several meetings of the Oregon Pharmacological Association convened there, and there was even a short-lived Yaquina University. The Lincoln County Leader reported on January 10, 1895, that the school’s second term had begun that month, “for the thorough teaching of young ladies and gentlemen.”

Poor investments and miscalculations about maritime commerce opportunities eventually led to the town’s downfall. The railroad suffered several accidents, probably because of mismanagement or lack of capital for repairs. Then there were the accidents to Hogg’s steamers, used for local transport. After the Yaquina City went aground while entering Yaquina Bay in December 1887, Hogg chartered the City of Topeka and renamed it Yaquina Bay. In December 1888, the steamer rammed against the south jetty, broke up, and sank. These incidents frightened investors away.

There were larger transportation problems as well. Yaquina Bay, only fifteen feet deep before dredging, could not accommodate large ships headed to San Francisco. Most Willamette Valley commercial traffic used railroad lines to Portland and then steamers on the Columbia River, modes of transportation that the central coast could not use effectively, even with shortened route times to California.

By the mid 1890s, Yaquina City’s boom days were over. On the night of March 26, 1901, a fire destroyed most of the town’s business district, which was never rebuilt. There was a brief boost in 1918, when the U.S. Army’s Spruce Division used the city’s docks as a shipping terminus for supplies needed to build the Toledo spruce mill. The railway between Yaquina City and Toledo was abandoned in 1937, and the decline continued, though fortunes briefly revived when the railroad bed was graded and turned into a road.

Highway 101, built in the 1920s, bypassed Yaquina City for Newport, sounding Yaquina City’s death knell. Pete Rasmussen opened a store in Yaquina in 1946 and expanded it in 1947 for vacationers, but the town was long gone. The post office closed in 1958. Yaquina Pete’s Place became a local landmark and flourished until the 1970s. The building, sold in 1975, became the Mad Dog Tavern. 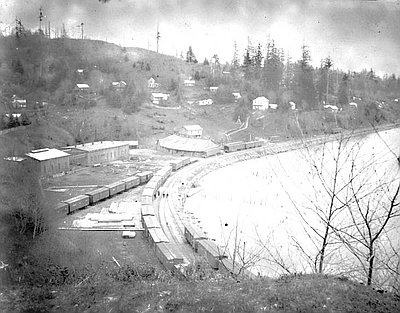 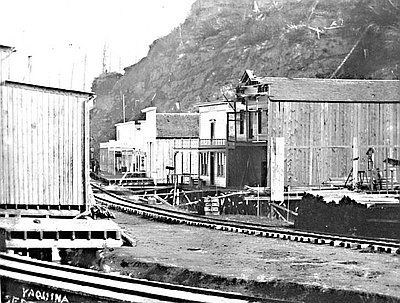 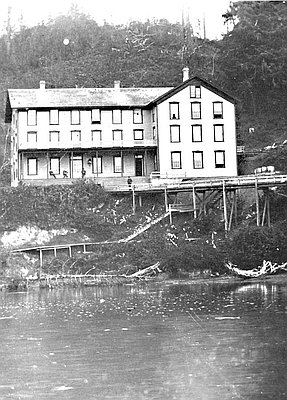 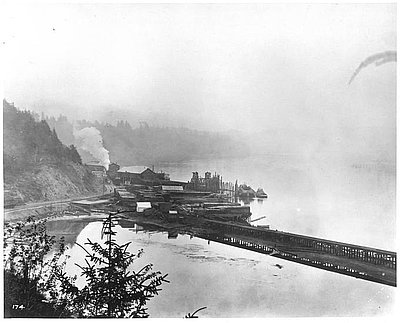 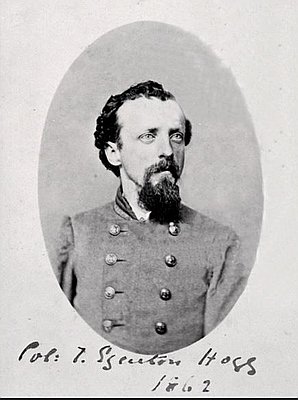 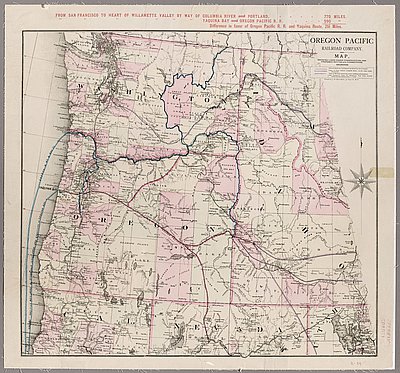 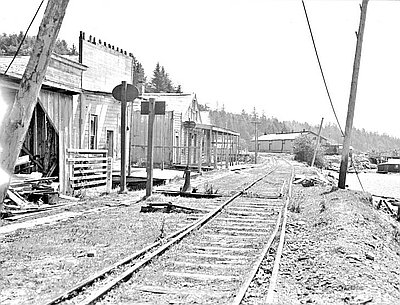 Wyatt, Steve M. “Yaquina: The Lost City.” The Bayfront, May 1999. On file at the Lincoln County Historical Society, Newport, Oregon.

Nestled on the west side of the mid-Willamette River, Corvallis is dominated by Oregon State University, the state’s largest university, and is home to the original offices of the international engineering firm CH2M Hill. Located eighty miles from Portland and fifty miles from the Oregon Coast, the city is known for …

Built in the 1870s by T. Egerton Hogg in a fit of over-opportunistic boosterism, the Oregon Pacific Railroad (which later became the Corvallis and Eastern Railroad) claimed to be Oregon’s first transcontinental connection. Linking Yaquina Bay with Boise, Idaho, Hogg’s railroad promised to cut 225 miles off the trip from …

In 1918, during World War I, almost thirty thousand U.S. soldiers were assigned to the Spruce Production Division (SPD) as part of the federal Loyal Legion of Loggers and Lumbermen (4L), a government-created union of loggers and sawmill owners formed to counteract widespread labor strikes by workers in the industry. …

Yaquina Bay Lighthouse, built in 1871, is the only wooden lighthouse in Oregon and is believed to be the oldest structure in Newport. The lighthouse was decommissioned in 1874.

In February 1869, the Oregon legislature sent a memorial to the U.S. Senate petitioning for a lighthouse at the mouth of …

Yaquina Bay, an estuary on the central Oregon Coast, was once home to the famed Olympia oyster. The two-and-a-half to three-inch delicacies, prized by the Yaquina people and later by non-Native aficionados, ignited a brief but decisive war on Yaquina Bay over who had the right to harvest the bivalves. …