Sea serpent (or monster) lore has been a staple of Oregon’s coastal culture since at least the 1930s, when newspapers reported the sighting of an unidentified sea creature at the mouth of the Columbia River. But unknown sea creatures have been a topic of regional traditions and speculation for over a century.

There are many fantastic sea creatures described in Northwest coastal Tribes’ oral traditions, including the earthly “sisiutl” and the “wasgo” in Kwakwaka’wakw, Tlingit, and Haida traditions along the coasts of Vancouver Island, British Columbia and southeast Alaska. Early reports of sea monsters appeared in non-Native sources as early at 1905, including the Sunday Oregonian’s “Caught by a Savage Sea Toad” in 1905 and “The Great White Serpent of the Malorli: A Tale of Love and Adventure” in 1911. Lavish, semi-scientific stories about sea monsters included a 1906 piece in the Oregon Sunday Journal, “Sea Serpents that Are not Summer Resort Delusions,” and an Oregonian article, “Sea Serpents: They Are a Reality and not a Myth,” caught readers’ imaginations in 1913.

The stories became more intriguing in March 1934, when the crew of the lightship tender Rose sighted an unknown creature near the South Jetty at the mouth of the Columbia. The Bend Bulletin relayed this description: “It’s [sic] head was under water, but we could see its long body. It appeared to be at least 40 feet in length.” The Salem Capital Journal reported that according to Captain J. F. Jensen all members of the crew had seen the serpent, which “had a neck about eight feet long, with a large head. It opened its huge mouth and gaped at the lightship.” Crew members wanted to lower a boat and pursue the creature, but the officers demurred, afraid it might turn on them and swamp the boat.

In the twilight between scientific knowledge and the unexplored reaches of the coast and the deep sea, more unexplained sightings were reported off the Oregon Coast. In 1937, for example, Captain Charles E. Graham of the troller Viv, said he saw a “long, hairy tan-colored creature, with the head of an overgrown horse, about 40 feet long, and with a 4-foot waist measure.” A couple near Yachats at Devil’s Churn in 1937 described a fifty-five-foot-long creature with a long neck and tail and a horselike head. Captain Chris Anderson of the halibut schooner Argo reported in 1939 that he had seen a monster, “10 feet in diameter and 50 feet long, with a head like a camel and glassy eyes,” that took a twenty-pound fish off the crewmen’s line. The same year, Robert O’Donnell and Vern Harms, steamship-line employees, saw a “monster” forty miles off Tillamook Bay that they described as “large headed and thick necked.”

Sea serpents were also seen off the coast of Bandon, including a twelve-and-a-half-foot-long animal with a “bulbous nose and cow-like body covered with brownish hair.” In 1939, more than thirty people saw a thirty-foot serpent off the coast at Nelscott (now part of Lincoln City), which had a slender neck and snakelike head. A strange animal—dubbed “Old Hairy” by locals—that washed up at nearby Delake in 1950 was described by Town Marshal Andy Allum as covered with hair, with a cowlike body, and weighing about a thousand pounds. Dr. E.W. Gudger of the American Museum of Natural History thought it was a whale shark, the Oregon Department of Fish and Wildlife opined that it was whale blubber, and Dr. Fred J. Kohlruss of the University of Portland thought it was an elasmobranch, a class of sea creatures with bones made of cartilage. The creature was never definitively identified. Other sightings were reported near Newport and Empire, most of them describing a head similar to that of a camel or horse and a body with scales, smooth skin, or fur.

Sea serpents have been given at least two names in Oregon. Cadborosaurus, or Caddy—the name for a sea serpent sighted frequently around Vancouver Island—has been used to designate some Oregon sightings, while the creature reportedly seen at the mouth of the Columbia and farther south, especially during the 1950s, was usually called Colossal Claude. Sightings of Colossal Claude or similar creatures appear to have ended by about 1960, and there the stories rested until 1963, when Shell Oil Company underwater cameras picked up a strange-looking animal off the Oregon Coast. The film, shot during the company’s search for offshore oil, showed a creature about fifteen feet long with barnacled ridges along the body, propelling itself with a corkscrew motion. There has been no scientific consensus on the identity of the creature, who was dubbed Marvin the Monster. It is unclear whether some or any of the Oregon sightings describe an animal similar to the British Columbia creature known as Caddy.

The repeated but elusive sightings of so-called sea monsters in the Northwest have occasionally created controversy and tension between scientists and cryptozoologists (people, often non-scientists, who study unknown creatures). Inconclusive evidence has led to a disagreement over whether the “sea monsters” are already known to science but misidentified, or constitute a new species. Sea serpent-sea monster lore remains a staple of the coast’s legendarium and will undoubtedly remain so, strengthened with periodic eyewitness accounts and reports. 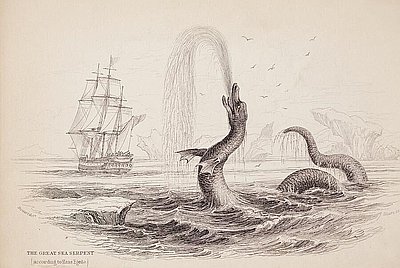 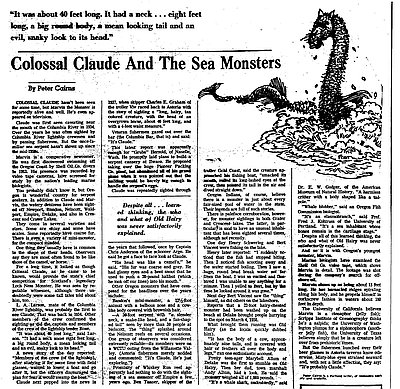 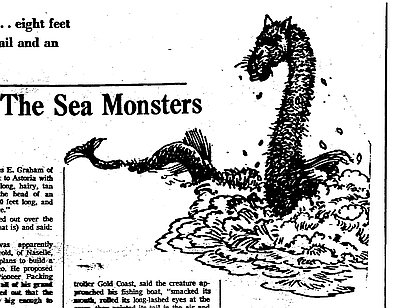 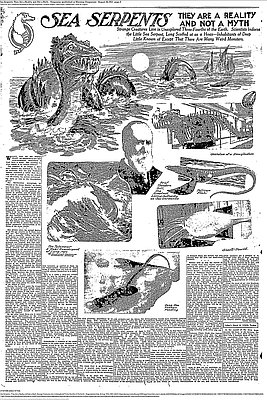 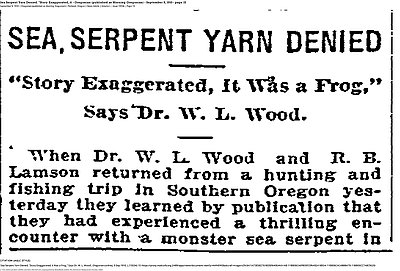 Perry, Douglas. “Oregon’s most famous mythical creature? It might not be the beast you think it is.” Oregonian/OregonLive, March 29, 2019.

Ricketts, Alexander. “The Great White Serpent of the Malorli: A Tale of Love and Adventure” Sunday Oregonian, July 16, 1911.

Swords, Michael. “The Wasgo or Sisiutl: A Cryptozoological Sea-Animal of the Pacific Northwest Coast of the Americas.” Journal of Scientific Exploration 5:1 (1991), 85-101.

Bigfoot is a large and mysterious humanoid creature purported to inhabit the wild and forested areas of Oregon and the West Coast of North America. Bigfoot is also known as Sasquatch, an Anglicization of the name Sasq’ets, from the Halq’emeylem language spoken by First Nations peoples in southwestern British Columbia. …