William M. Tugman played a major role in the history of Oregon as an editor for the Eugene Register-Guard and the Port Umpqua Courier and as an advocate for Oregon state parks. His influence was especially strong in raising journalism standards in the state and in his tenure as chair of the State Park Advisory Committee during the 1950s.

Born in 1893 in Cincinnati, Ohio, Tugman attended Harvard University, graduating in 1914 with a Bachelor of Arts degree. He served in World War I in the 302nd and 322nd Field Artillery, the 158th Brigadier Headquarters, and with the mounted service school of Field Artillery at Camp Jackson, South Carolina. He resigned in December 1918 with the rank of captain. In 1920, he married Genevieve New; they would have three sons and two daughters.

Tugman had begun his career as a newspaper reporter before World War I, and he returned to it after the war ended. In 1927, when fellow Ohioan Alton Baker purchased the Eugene Guard, he got in touch with Tugman, who was then the police, city hall, and public affairs reporter for the Cleveland Plain Dealer, and hired him as managing editor. In 1930, Baker also purchased the Register, also in Eugene, and combined the two papers to form the Register-Guard.

Tugman was the Register-Guard’s managing editor until 1954. Described by his colleague William Wassman as “outspoken, literate and fiery,” Tugman believed, with Alton Baker and his reporters, that the press must not only defend the people’s right to know but also “inform people about what they believed the public ought to know.” That included in-depth reporting on a variety of issues and events. While Tugman was at the helm, the Register-Guard took editorial stands, written in sparkling prose, on such issues as the merging of the University of Oregon with Oregon State University (which Tugman opposed) and the political fireworks of Oregon Senator Wayne Morse, whom the Register-Guard generally supported. He was also an outspoken advocate for building codes, zoning, and city planning.

In 1944, Tugman received the Amos E. Voorhies Award from the Oregon Newspaper Publishers Association for outstanding journalistic achievement, and he was honored in 1954 with an award from the University of Oregon for Distinguished Service to the State. He left the Register-Guard in 1954 and purchased the Port Umpqua Courier in Reedsport, which he ran until 1961.

Tugman had long been a promoter of the state parks system, and in 1955 Governor Paul Patterson appointed him chair of the State Park Advisory Committee, which was part of the Oregon Highway Commission's Advisory Committee on Travel Information. There was concern that the commission was not properly managing the fledgling state park system, and pressure was growing for a separate state parks agency to be funded by motor vehicle revenues. Governor Patterson was chary of this proposal and charged the committee with determining whether or not there should be a separate department. Committee members held public hearings and traveled to state parks in Oregon, western Washington, and coastal California.

The Committee reported its findings to Governor Elmo Smith on July 16, 1956, in what became known as the Tugman Report. Its recommendation was that the state park system remain under the Highway Commission’s jurisdiction, as long as it was financed solely from highway revenues. The committee also recommended that the Highway Commission create an advisory board to oversee, research, and make recommendations on the state park system, including acquisitions, financing methods, park organization structure, and cooperation with other agencies. In August 1957, Governor Robert Holmes appointed the State Parks Advisory Committee, which was renamed the State Parks and Recreation Advisory Committee two years later. Again, Tugman was the chair.

When William Tugman died in May 1961, Oregon named a coastal park in his honor. William M. Tugman State Park is 560 acres on Eel Lake near Lakeside, straddling the Coos-Douglas county line. The park, which protects public access to Eel Lake, has been developed for camping, day use, boating, and fishing. It is popular with campers, and annual day use attendance is 318,000. The park is about ten miles from Tugman’s former newspaper office in Reedsport.

Smith, Robert. A. “Morse biographer is surprised by how the Tiger still roars.” The Register-Guard, November 30, 2010. 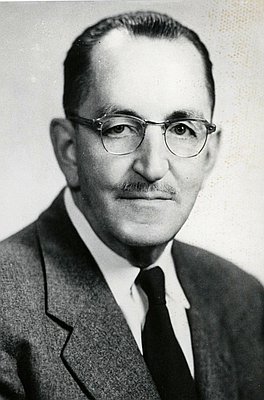 Shortly after Samuel Boardman became Oregon’s first director of state parks in 1929, he received a proposal for a park along the north coast. Helen Drollinger, who owned land on the coast, wrote Boardman proposing a new park and suggesting that Sam Reed, the founder of the town of Neahkahnie, …

Governor Paul Linton Patterson began his career in state politics in the Oregon State Senate, where he served for six years, the last year as Senate president. When Governor Douglas McKay resigned to become Secretary of the Interior under President Dwight Eisenhower in 1952, Patterson was named governor, an office …

In many ways, the story of Reedsport is a microcosm of the story of Oregon. Since the mid-1800s, the town has seen economic booms driven by abundant natural resources and has endured long periods of bust as those resources dwindled and priorities changed. Reedsport has both flourished and floundered. The …