Governor Paul Linton Patterson began his career in state politics in the Oregon State Senate, where he served for six years, the last year as Senate president. When Governor Douglas McKay resigned to become Secretary of the Interior under President Dwight Eisenhower in 1952, Patterson was named governor, an office he held until his death in 1956. As governor, he was a strong fiscal conservative and an Eisenhower supporter who welcomed the expansion of national highways and hydroelectric projects in Oregon.

Patterson was born in Kent, Ohio, on July 18, 1900. His family moved to Portland, Oregon, in 1908. After serving in the U.S. Army artillery in World War I, Patterson earned a bachelor’s degree in business administration in 1923 from the University of Oregon and a law degree from the University of Oregon in 1926. He established a law practice in Hillsboro, served as deputy district attorney for Washington County from 1926 until 1933, and represented Hillsboro as city attorney for a number of years between 1933 and about 1950.

Patterson was serving as chair of his local Republican Party in 1944 when, having failed to find a candidate for a seat in the Oregon Senate, he decided to run for the position himself. He won the election, and by 1952 was president of the Senate. Only a few months later, in December 1952, Governor McKay resigned in order to accept a position as Secretary of the Interior under the new Eisenhower administration. By the state’s laws of succession at the time, Patterson became governor. One of his first acts after taking office was to sign the 1953 Oregon Civil Rights Bill outlawing discrimination based on race, religion, or national origin.

As governor, Patterson followed in his predecessor’s footsteps, keeping tight control on expenditures and relying on federal funding when possible. He opposed new taxes to pay for state projects and argued that a sales tax should only be adopted through a popular vote. In the 1954 election, Patterson faced Democrat Joseph K. Carson, a former mayor of Portland and a representative of the States American Legion, a veterans' organization aimed at fostering patriotism and community service. Patterson won the election with 56 percent of the vote.

During his first full term, Patterson lobbied for federal funds to combat unemployment in Oregon. During his administration, the federal government was persuaded to sell off several billion feet of windblown timber to ensure that Oregon lumber workers could continue working. With the help of Oregon Senator Elmo Smith, the Patterson administration supported the establishment of a Water Resources Board in 1955 to regulate the development of the state’s water resources. Patterson also worked with the Eisenhower administration to bring national highways to the state. He was a supporter of the Federal-Aid Highway Act, developed a partnership with the federal government to develop new hydroelectric projects, and was a firm supporter of home rule, small government, and states’ rights.

In 1956, Patterson announced his candidacy for the U.S. Senate seat held by Wayne Morse. The announcement was well received by Republicans, who hoped to unseat the maverick senator. Morse had been elected as a Republican but had become an Independent to protest the addition of Richard Nixon on the Eisenhower ticket. After serving for three years as an Independent, he had joined the Democratic Party. Only two days after Patterson announced his candidacy, however, he was stricken by a heart attack while meeting with political advisors at the Arlington Club in Portland. He died on January 31, 1956, and was succeeded by Oregon State Senate president Elmo Smith. Patterson was survived by his wife Georgia Searle Benson and their three children. 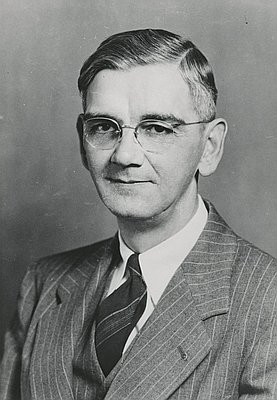 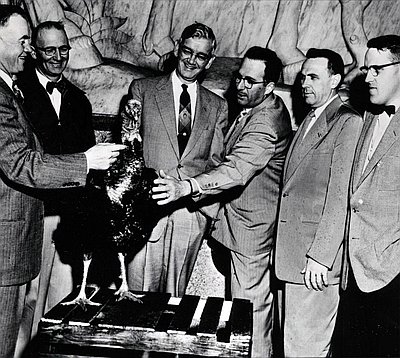 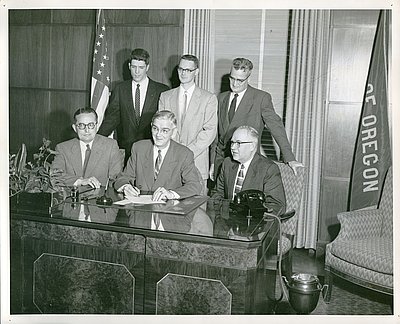 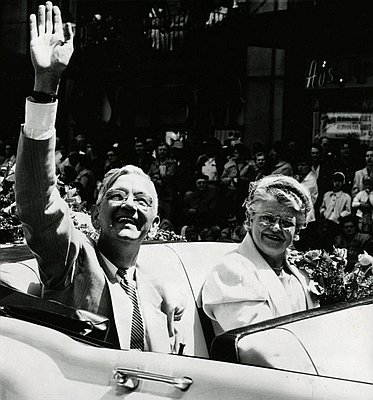 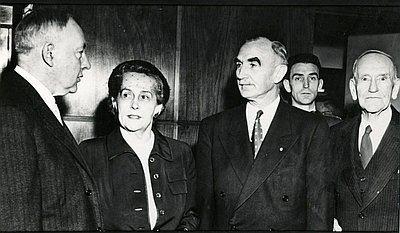 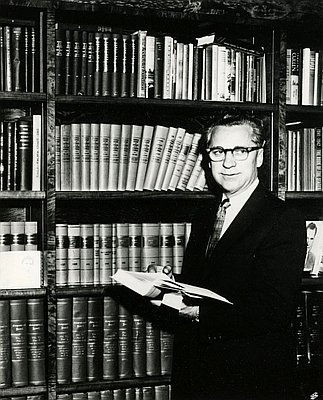 Hillsboro, the seat of Washington County, is in the Tualatin River Basin west of Portland. The earliest people in the area were Atfalati, who gathered at Chatakuin—today’s Five Oaks—to settle disputes, arrange transactions, and carry out community affairs. The first Europeans and Americans arrived in the late 1830s: retired Hudson’s Bay …

Douglas McKay, a conservative Republican, was governor of Oregon from 1949 through 1952 and U.S. Secretary of the Interior from 1953 to 1956. An affable and able politician, he won every election, from his first campaign for Salem city councilor in 1930 through his re-election as governor in 1950. That …