Mount Hood is a stratovolcano in northwest Oregon located about fifty miles east of Portland and thirty-five miles south of the Columbia River. At 11,244 feet, it is the highest point in Oregon and the fourth highest peak in the Cascade Range. Mount Hood has played a central role in the geology, history, natural environment, and culture that have helped shape northwest Oregon and the entire Pacific Northwest.

Composed primarily of andesite and dacite, Mount Hood began to form during volcanic eruptions between 500,000 and 700,000 years ago. Over the ensuing millennia, further eruptions continued to shape and give rise to the mountain. At its highest, Mount Hood topped 12,000 feet, with ice and erosion reducing the peak to its current height. Notable natural features include Cooper Spur, Illumination Rock, Barrett Spur, Mississippi Head, McNeil Point, Yocum Ridge, and Cathedral Ridge.

Eruptions on Mount Hood have been characterized less by powerful explosions than by the gradual building and collapse of lava domes, pyroclastic flows, and volcanic mudflows known as lahars. In the past 2,000 years, Mount Hood has experienced three eruptive periods: the Timberline period, just over 1,500 years ago; the Zigzag period, about 600 years ago; and the Old Maid period, between the 1760s and the early 1800s. The most recent major eruption, estimated to have occurred in the 1780s, sent a massive lahar down the Sandy River and left behind Crater Rock, a 550-foot-high lava dome on the mountain’s south side. Although the mountain has not erupted since then, vents on its upper reaches, called fumaroles, still emit sulfurous steam, and minor earthquakes occur frequently deep beneath the mountain.

Mount Hood is host to eleven named and active glaciers: Zigzag, Reid, Sandy, Glisan, Ladd, Coe, Langille, Eliot, Newton Clark, White River, and Coalman. A twelfth glacier, christened the Salmon Glacier in 1924 and later renamed the Palmer Glacier, lost enough of its volume and mobility over the twentieth century to be widely regarded as a snowfield. The mountain is also the source of five major rivers—Salmon, Zigzag, Sandy, Hood, and White—and is the centerpiece of the Mount Hood National Forest, a million-acre forest that more than four million people visit each year.

The glaciers are not the source of drinking water for the City of Portland, which gets its water from the Bull Run Watershed, a 102-square-mile protected watershed in the Mount Hood National Forest northwest of Mount Hood proper. Bull Run is separated from the mountain by a prominent ridge and is fed largely by rainfall, which ranges from 130 inches a year at lower elevations to 170 inches higher up. Meltwater from the Eliot, Coe, and Newton Clark glaciers feeds the three streams that eventually form the Hood River, which farmers and orchardists use to irrigate crops and fruit trees in the Hood River Valley. The Mount Hood National Forest contains no fewer than fifteen municipal watersheds.

For thousands of years, Native people lived in the shadow of Mount Hood, primarily along the Columbia River and its tributaries and in the Willamette Valley. Middle and Upper Chinookan tribes and bands, including the Cascades and Molala people, lived in the Cascade Range and had a north-south trail system that approximates the modern-day Pacific Crest Trail. They hunted and fished around Mount Hood; gathered huckleberries, roots, and edible plants; and harvested plants such as beargrass for use in basket weaving.

Native people regarded the mountain as a sacred place. In one myth from the Klickitat Tribe, the Great Spirit has two sons, Wy’east and Pahto, who engage in a destructive battle to win the affections of a beautiful woman named Loowit. Enraged at his sons, the Great Spirit turns all three into mountains: Pahto is Mount Adams, Loowit is Mount St. Helens, and Wy’east is Mount Hood.

The mountain and the lands surrounding it were ceded to the United States through the Kalapuya Treaty of 1855 and the Treaty with the Tribes of Middle Oregon, which was ratified in 1859. The Confederated Tribes of Warm Springs Reservation, home to approximately 4,000 members of the Warm Springs, Wasco, and Paiute Tribes, is located south of Mount Hood.

The first recorded sighting of the mountain by Europeans was in 1792. While leading a small expedition of two longboats up the Columbia River in October 1792, Lt. William Broughton, a British naval officer, described the mountain and named it in honor of Lord Samuel Hood, a British admiral who never saw the mountain. The Lewis and Clark Expedition also saw the mountain in 1805-1806.

Mount Hood was a major landmark for early settlers who came to Oregon on the Oregon Trail. In late summer 1845, Samuel Barlow set off with a wagon train from The Dalles in search of a land route around Mount Hood. Aided by Joel Palmer, the group blazed a trail around the mountain’s southeast side. The next year, Barlow developed the route known as the Barlow Road, which many settlers used to make their way to the Willamette Valley. Small communities were established on the mountain over the decades, including Zigzag, Rhododendron, Government Camp, and Parkdale.

The first officially recorded climb to the summit of Mount Hood was made by Henry Pittock and his team in 1857 (a team led by Thomas Dryer claimed to have made it to the top three years earlier). Pittock was a newspaper editor and the longtime publisher of the Portland Oregonian.

In 1894, the Mazamas, a Portland-based mountaineering club, was founded on the summit of Mount Hood. During the twentieth century, the mountain became a major attraction for climbers. A fire lookout cabin was built on the summit in 1915, and each year rangers installed fixed lines on the upper portions of the main routes to assist climbers. The Forest Service estimates that between 8,000 and 10,000 people attempt to climb Mount Hood every year. Most people follow the South Side route, though there are many more routes, including advanced routes such as Yocum Ridge, Cooper Spur, and Center Drip on a northeast face known as the Black Spider.

More than 130 people have lost their lives on Mount Hood while climbing, skiing, or taking part in other activities. In 1986, seven high school students and two staff members from Oregon Episcopal School in Portland died after being trapped on the mountain by an intense storm. They had been attempting to climb the mountain as part of the school’s Basecamp Wilderness Education Program. Deteriorating weather forced the group of ten students and three adults to take shelter in a snow cave. After the first night, one adult and one student left the cave to try and find help. The pair reached Mt. Hood Meadows Ski Resort the next morning, but searchers did not find the cave until three days later. Only two of the students survived. In 2002, nine climbers fell into a crevasse on the South Side route. Three of them died. While attempting to evacuate an injured climber, an Air Force Pave Hawk helicopter crashed into the mountain. In 2006, three climbers attempting a winter ascent of the Cooper Spur route ran into trouble, triggering a multi-day search that captured national media attention. Searchers found the body of one of the climbers in a snow cave on the north side of the mountain; the other two were never found.

In addition to being a popular climbing destination, Mount Hood has five skiing and snowboarding resorts: Summit Ski Area, Timberline, Mt. Hood Meadows Ski Resort, Cooper Spur Mountain Resort, and Mt. Hood Skibowl. The snow on Mount Hood—averaging between 300 and 500 inches annually—is wetter and heavier than at other well-known ski areas in the West, but the high elevation, especially at Timberline, gives Mount Hood what is likely the longest ski season in North America. Olympic ski and snowboard teams from around the world train at the Timberline ski area during the summer, and a ski and snowboard summer camp scene has developed on the southern side of the mountain since the 1980s.

The ski area at Timberline is centered on Timberline Lodge, a National Historic Landmark built as a Works Progress Administration project between 1936 and 1937. The lodge, at just below 6,000 feet on the mountain’s south side, is a prime example of a rustic style of architecture known as Cascadian. Timberline Lodge struggled in its early years and closed during World War II and again in 1954 due to financial and management challenges. It reopened in 1955 under the management of Richard Kohnstamm, who was able to turn the business around. An estimated two million people visit Timberline Lodge every year. Other historic structures on Mount Hood include Silcox Hut, Cloud Cap Inn, and a handful of stone shelters built by the Civilian Conservation Corps in the 1930s. The stone shelters are located along Timberline Trail, a forty-one-mile hiking trail that encircles the mountain.

Modern-day issues facing Mount Hood and its surrounding environment include new residential and resort development, traffic congestion, the increased use of recreational areas, and greater demand on natural resources such as water and timber. The mountain sits within and is partially surrounded by federally protected wilderness. In 2009, Congress passed the Omnibus Public Land Management Act of 2009, which added nearly 127,000 acres of wilderness to the Mount Hood National Forest. The additions include several areas high up on the mountain such as Elk Cove and the canyons along White River. 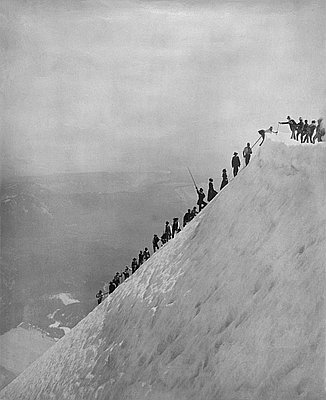 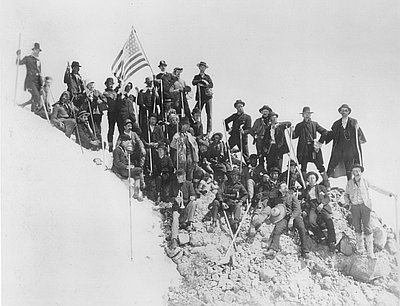 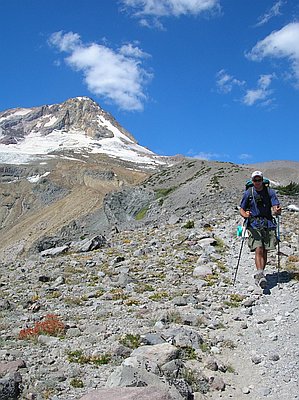 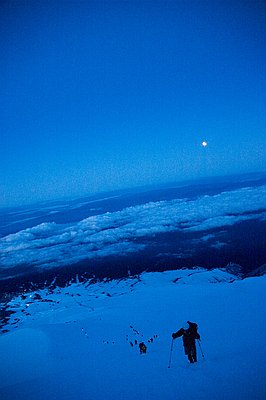 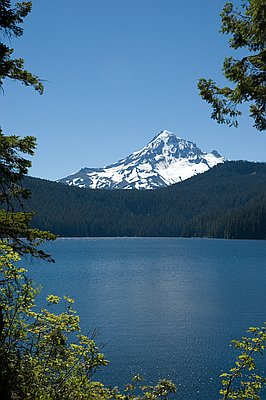