Ponderosa pine(Pinus ponderosa)—also known as yellow, western yellow, pondosa, blackjack, or bull pine—is one of the most widespread, easily recognizable pines in Oregon and the Mountain West. Its tall, straight, yellowish to reddish-brown trunks in a park-like setting are a pleasant, familiar sight in many parts of central Oregon.

The indefatigable Scottish botanist and plant explorer David Douglas proposed the name Pinus ponderosa based on specimens he collected near the Spokane River in 1827. His name for the tree was published posthumously in 1836. Ponderosa is from the Latin ponderosus,meaning large, heavy, or weighty. Douglas’s collection introduced the species to British horticulture; of the three recognized varieties, two of them, var. ponderosa (Pacific ponderosa pine) and var. scopulorum (Rocky Mountain ponderosa pine), are found in Oregon.

Variety ponderosa grows in the western United States and Canada, from southern British Columbia along the east slopes of the Cascades, to the Klamath Mountains, to southern California. Isolated populations occur in the Willamette Valley and the gravelly prairies of Puget Sound. Variety scopulorum is found in the Rocky Mountains south to Mexico and western Great Plains to Texas. It is absent in the Columbia Plateau of Washington, Oregon's Great Basin, and most of Nevada.

Ponderosa pine thrives in relatively dry climates and droughty or rocky soils because of its ability to acquire and conserve water. Its deep roots reach moist soils far below the dry, hot surface. Its seedlings withstand desiccation, and its stomata (leaf pores) can efficiently close, preventing water loss by transpiration. Because ponderosa is shade intolerant, it can be replaced by shade-tolerant conifers in areas where fire is not a frequent visitor. Ponderosa pine, however, with its thick fire-resistant bark, is well adapted to survive frequent low-intensity fires.

Depending on the group, Native Americans used ponderosa pine in a variety of ways: for medicine, food, fiber, a blue dye, and firewood. Pitch and gum concoctions were used for sore eyes and aching backs and as an underarm deodorant. Seeds and inner bark were eaten. Needles were used in basketry, and wood was used for timber and building materials.

Today, the tree is valued for its ecological and economic qualities. Some claim that its wood is the most versatile in North America, and it is used extensively for residential and light construction. Unfortunately, much of the old-growth ponderosa pine, with its high-quality sapwood, was harvested by the mid-twentieth century. Early settlers quickly logged the big pines that were once found in the Willamette Valley. Careful treatment of second-growth stands with thinning and prescribed fire will be required before trees can once again produce the yellow, fine-grained workable boards and timber that were so valuable in the past. 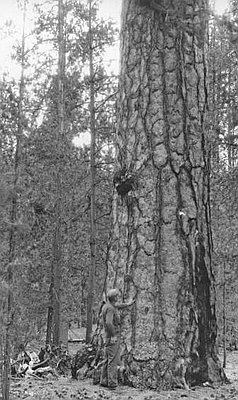 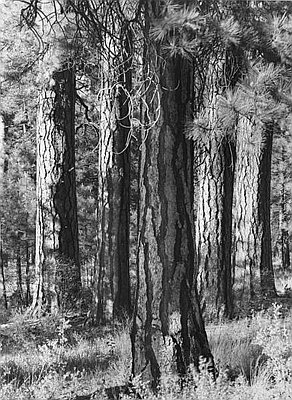 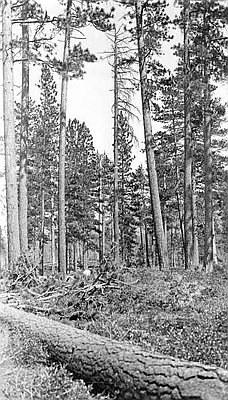 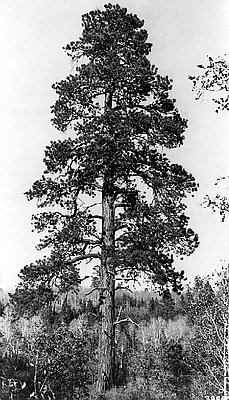