The Barlow Road is a historic wagon road that created a new route on the Oregon Trail in 1846. Until the road was opened, the overland portion of the Oregon Trail effectively ended in The Dalles. Mount Hood, and the Cascade Range in general, was an insurmountable obstacle to early wagon trains. Settlers who had survived the nearly 2,000-mile journey from Independence, Missouri, found The Dalles crowded with other emigrants awaiting expensive and dangerous passage down the Columbia River. They paid barge operators to float their wagons down the river while they walked the path along its banks or drove their livestock over Lolo Pass, a narrow, high-elevation pass ten miles northwest of Mount Hood. The Barlow Road, although rough and steep, was passable by large wagon trains, and its construction significantly increased emigration to Oregon.

The eighty-mile Barlow Road began at The Dalles, running south through Dufur to the Tygh Valley, where it veered west across Tygh, Rock, and Gate Creeks. The road then crossed the White River before ascending northwest along Barlow Creek. It skirted the south side of Barlow Butte, heading west past Summit Meadows and Government Camp to descend the steep Laurel Hill. From there, the road continued north and west, following Camp Creek to the Sandy River, where it crossed to the north bank. It passed Rock Corral en route to Marmot, where the road then followed the Devil's Backbone southwest back across the Sandy River. After crossing Eagle Creek near Foster's Place and the Clackamas River at Feldheimer's Ford, the road passed through Logan and then ventured northwest to terminate at Oregon City.

Sam Barlow, a fifty-three-year-old settler and leader of a wagon train, had arrived in The Dalles in 1845 to find the town overrun by stalled emigrant parties. Frustrated by the situation, he was determined to find an alternative route to the Willamette Valley. In September of that year, Barlow's train and another operated by H.M. Knighton set out to investigate an Indian trail that led across the southern slope of Mount Hood to Willamette Falls. After heading south for approximately twenty miles, Knighton turned back, convinced that a wagon route would be impossible.

Barlow’s seven wagons forged ahead into the Mount Hood foothills, near Tygh Creek in present-day Wasco County. He left his party there for several days while he and three men scouted a possible route around the mountain. When he returned to the valley, he found that twenty-three additional wagons had arrived under the leadership of Joel Palmer, a thirty-five-year-old Indiana emigrant. Palmer had talked with local Indians about the trail and had learned in The Dalles about Barlow's intention to find a route around Mount Hood.

Barlow and Palmer joined forces, and the expanded party began burning and cutting a trail through dense forest and over the Mount Hood foothills. The two men, accompanied by William Rector, scouted the trail in advance of the wagon party. On October 12, Palmer, Barlow’s twenty-two-year-old son William, and a Mr. Lock ascended the south face of Mount Hood to spot a way through the western foothills.

With snow on its way, the group stashed their wagons and supplies at a place they named Fort Deposit, just east of a newly blazed trail over what is now known as Barlow Pass. Several members of the party were assigned winter guard duty, remaining with the supplies until the weather broke in the spring. The bulk of the party, including Barlow and Palmer, continued by pack train and arrived in Oregon City late in 1845.

Barlow wasted no time in petitioning Oregon’s provisional legislature for a charter to construct a toll road along the new route. The legislature approved the petition for the Mount Hood Toll Road, popularly named the Barlow Road. Barlow organized a partnership with businessman Philip Foster, who owned a farmstead near Eagle Creek. Financed by $4,000 from Foster, Barlow hired forty men and began building the toll road early in 1846. The most difficult section of the trail, near Laurel Hill, reached a 60 percent grade that required wagons be lowered down the hill by ropes.

The one-way toll road—east to west—was formally opened later in 1846, with tolls regulated at five dollars for each wagon and ten cents a head for livestock. In its first year of operation, the Barlow Road recorded approximately 1,000 emigrants and 150 wagons through its five tollgates. Close to 25 percent of emigrants that year arrived in Oregon by way of the Barlow Road.

Barlow’s two-year concession on the toll road ended in 1848, at which time Barlow and Foster dissolved their partnership, having grown weary of the largely unprofitable venture. Private owners continued to administer the toll road for the next seventy years, with varying degrees of success. In 1914, the road passed to attorney and State Senator George W. Joseph through the disputed will of Portland businessman E. Henry Wemme. Joseph and his wife bequeathed the road to the State of Oregon in 1919.

Much of the Barlow Road was later incorporated into the Mount Hood Highway (Highway 26). Surviving sections of the original road, including wagon ruts, can still be found at various points, including near Barlow Creek, Laurel Hill, and Pioneer Woman's Grave. A replica tollgate stands near Rhododendron at the site of the last tollgate on the original road.

In 1978, the Oregon Trail, including the Barlow Road, was awarded National Historic Trail status. Protection of the road expanded in 1992 when the Barlow Road was granted Historic District status and placed on the National Register of Historic Places. 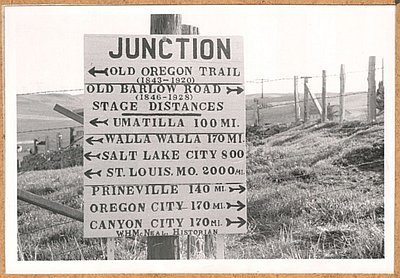 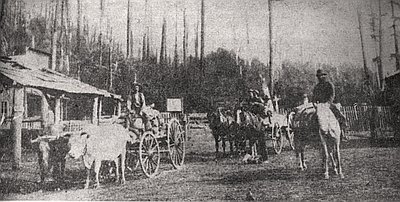 Unruh, John D. The Plains Across: The Overland Emigrants and the Trans-Mississippi West, 1840-60. Champaign: University of Illinois Press, 1993.

Philip Foster was the second treasurer of Oregon’s Provisional Government, but it was financing Sam Barlow’s 1846 toll road around Mount Hood to Oregon City that changed his, and Oregon’s, fortunes. Foster not only partnered with Barlow in building the overland alternative for emigrants to avoid the Columbia River rapids, …

The Dalles is one of the oldest permanently occupied places in Oregon, significant to Native people for over ten millennia and to Euro-American settlers since the 1830s. The city, the largest in Wasco County, is located on a bend of the Columbia River at the east end of the Columbia …