Dufur, located thirteen miles south of The Dalles on U.S. 197, is a farming community of about 600 people. The name was originally Fifteenmile Crossing, but with the establishment of a post office in 1878, the name was changed to Dufur. The town was named for the DuFour family, who emigrated from France and settled in Wasco County in 1872. A.J. and Enoch DuFour bought land and began raising sheep. The brothers operated Fifteenmile House, and the community grew, with early enterprises focused on stock raising and sawmills. In the 1860s, Horace Rice planted wheat on the uplands; others soon followed, and before long the hills were covered with wheat fields.

In the early twentieth century, farmers planted many acres of apples, and the population of Dufur boomed. As many as 400 workers were employed during the harvest. But by 1921, it became obvious that there was inadequate moisture to support the orchards, and the trees were pulled and burned. Ironically, cherry orchards are flourishing near Dufur today, irrigated by wells and micro-sprinklers.

Dufur is home to the headquarters of the Barlow Ranger District, which employs twenty workers. The first ranger was stationed there in 1898. The Dalles-California highway opened in 1923 and for many years was the town’s main street. In the 1950s, U.S. 197 was built east of town and today is the main north-south route through Wasco County.

The major community event in Dufur is the annual Threshing Bee, which has been held every August since 1971. Visitors can inspect vintage farming machinery, attend threshing demonstrations, and watch a homegrown parade. 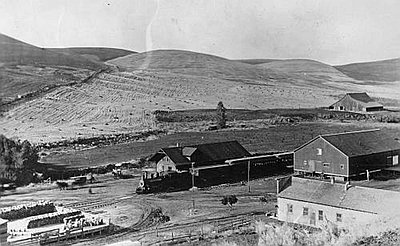 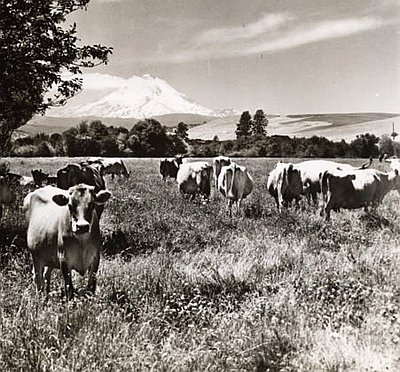