The history of the Mazamas began in early 1894 when William Gladstone Steel and several Oregon Alpine Club members met to organize a new club. They hoped to fulfill Steel’s vision of a Pacific Northwest mountaineering club second to none in climbing, exploration, and scientific achievement. They drafted a constitution in March, when they chose the name Mazamas. All members had to climb a glaciated peak, they decided, to ensure that only real mountaineers would be part of the club.

The group chose the summit of Mount Hood as the location to launch their new organization and placed an advertisement for the event in Northwest newspapers. On July 19, 1894, more than 350 people assembled near the hamlet of Government Camp at the base of Mount Hood. Despite the nasty weather, 155 men and 38 women reached the summit, where they elected Steel as the first president.

With 105 charter members, the Mazamas was the third oldest mountaineering society in the United States. It set four goals: to explore snow-capped peaks and other mountains, to collect scientific knowledge about the mountain environment, to preserve the natural beauty of the forests and mountains, and to share all that knowledge with others in the Pacific Northwest.

William Steel, full of enthusiasm and a sense of purpose, was the driving force behind the club. Other prominent founding members included Oregonian publisher Henry Pittock; attorney Rodney Glisan; and L.L. Hawkins, the founder of the Free City Museum, the forerunner to the Oregon Museum of Science and Industry. Naturalist and conservationist John Muir became a member, along with photographer Edward Curtis, Edward Harriman, President Theodore Roosevelt, and Yvon Chouinard, the founder of Patagonia.

In 1895, Steel and the Mazamas lobbied to prevent development in the Cascade Range Forest Reserve. A few years later, in 1902, the club rallied to limit the destructive effects of sheep grazing in the Northwest. In 1928, the Mazamas entered a prolonged battle against the proposed Mt. Hood Tramway, and four years later the club was instrumental in the formation of the Federation of Western Outdoor Clubs. The Mazamas advocated against the development of a tramway on Mount Rainier and development in Olympic National Park and for the creation of Forest Park in Portland and the Wilderness Act of 1964.

The Mazamas embraced scientific research, and early in its existence members documented the flora, fauna, and geology of Northwest peaks. In the 1930s, Mazama members began surveying glaciers and noting the changes from year to year.

From the beginning, the Mazamas welcomed women as full members, which was uncommon at the time. The organization's first two vice-presidents in 1895 were women, the first female Mazama climb leader was named in 1917, the first all-female climb took place in 1933, and the first female Mazama president was named in 1953. “No climb is complete without them,” Steel replied when he was asked about women mountaineers.

In 1952, the Mazamas started the Mazama Climbing School, a free climber education program that opened its classes to anyone, from high school students to Mazama members. After struggling for a few years, the school moved onto sturdier footing when high school teacher Bill Oberteuffer took over its management. The school benefited from his high standards, lectures, and skill-building field trips for years. The Mazamas added an intermediate program in 1957 to help develop leaders and an advanced course in 1965.

The Mazamas has had three lodges on or near Mount Hood. The first lodge, built in 1923, was on the Zigzag River near Twin Bridges. In 1931, after road conditions over the pass improved, the club built a grand lodge at Government Camp; it burned to the ground in 1958. The current lodge, constructed at Government Camp in 1960, serves as home base for many Mazama activities.

On January 1, 1960, three Mazamas, two men and one woman, made the first ascent of Monkey Face at Smith Rock in central Oregon. Two years later, the Mazamas published one of the first climbing guides to the area, which is now a popular climbing destination. By the 1980s, Mazama activities had spread across the Pacific Northwest and around the world. Annual Outings were replaced by smaller outings to places such as the European Alps, the Himalayas, and the Andes of South America.

Since its founding, the Mazamas has evolved into a modern nonprofit organization. Mazamas lead over seven hundred hikes and three hundred climbs a year, and the group offers affordable mountaineering, an Intermediate Climbing School, canyoneering classes, and opportunities for young climbers. The Mazama Mountaineering Center is located in southeast Portland, and the club publishes a monthly magazine. 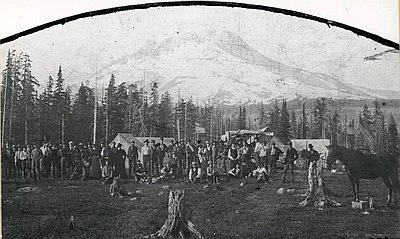 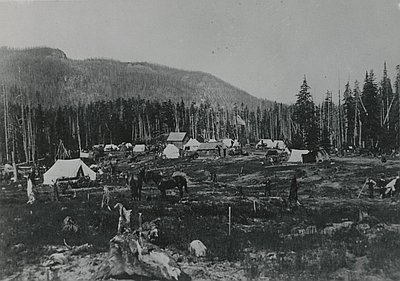 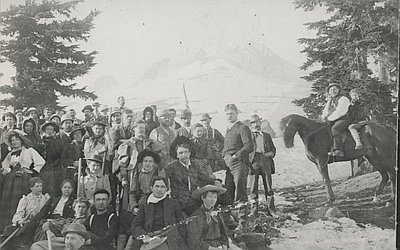 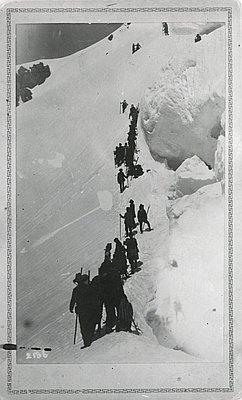 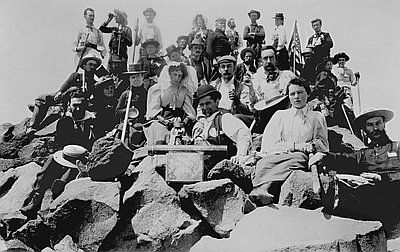 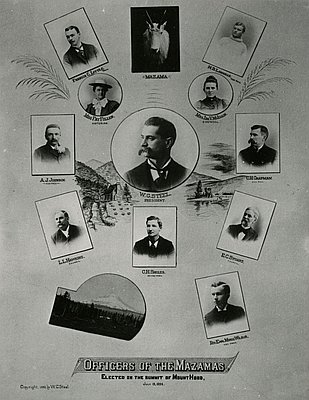 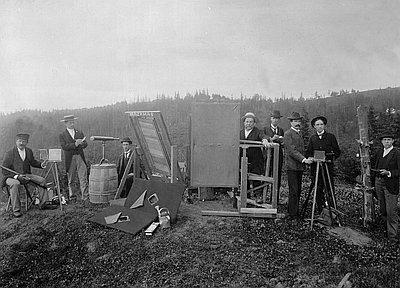 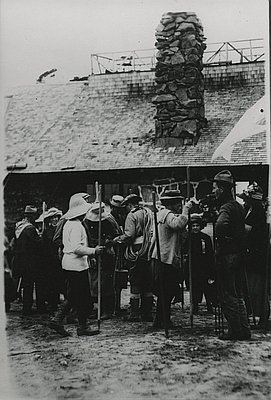 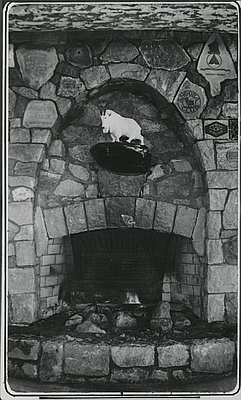 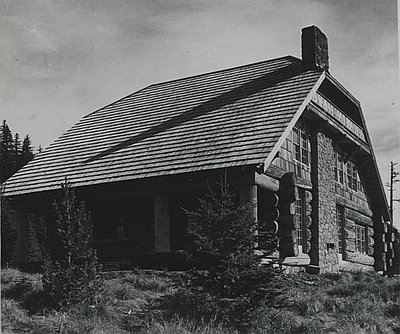 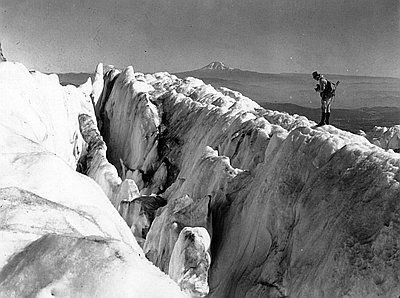 John Muir (1838-1914) was America’s pioneer conservationist and an outspoken advocate for the protection of forests, parks, and wilderness. Born in Scotland, he is best known for his wilderness writings and explorations and for his tireless work to establish and protect Yosemite National Park. In 1868, he left his family’s …

Mount Hood is a stratovolcano in northwest Oregon located about fifty miles east of Portland and thirty-five miles south of the Columbia River. At 11,244 feet, it is the highest point in Oregon and the fourth highest peak in the Cascade Range. Mount Hood has played a central role …

Born in Ohio on September 7, 1854, William Gladstone Steel was raised in an abolitionist family that provided refuge for escaped slaves on the Underground Railroad. In 1872, he moved with his family to Portland, where he graduated from high school and then apprenticed as a pattern maker in …