Born in Ohio on September 7, 1854, William Gladstone Steel was raised in an abolitionist family that provided refuge for escaped slaves on the Underground Railroad. In 1872, he moved with his family to Portland, where he graduated from high school and then apprenticed as a pattern maker in an iron works. By 1885, when Steel was employed in Portland's post office, he decided to see Crater Lake for the first time. The trip inspired him to lead a campaign for Crater Lake to receive national park status, but it expanded to include promoting the idea of retaining Oregon's Cascade Range in federal ownership.

He quickly joined forces with John B. Waldo, the former chief justice of the Oregon Supreme Court, to persuade President Grover Cleveland to proclaim the first federal forest reserves in the state by 1893, even if bills to designate Crater Lake a national park stalled in Congress. Those early reserves formed the basis for national forests in the Cascade Range, but also roused opposition from speculators and sheep interests who wanted to retain free pasture on public land. Led by Steel and Waldo, supporters of the reserves prevailed in 1896, and legislation passed by Congress the following year led to hiring the first forest rangers.

President Cleveland’s proclamation put more than four million acres in the Cascade Range Forest Reserve in response to a petition from the Oregon Alpine Club, a group Steel started in 1887. Although the club sponsored an expedition to the Olympic Mountains two years later and attracted the support of some influential Portlanders, Steel wanted more commitment to climbing and conservation from its members. In 1894, he and others started a new club, the Mazamas, whose requirement for membership included climbing a glaciated peak. The Mazamas immediately eclipsed the alpine club in its influence, and political support from that group proved crucial to winning the battle for federal forests and prevailing on Congress to establish Oregon’s only national park.

What ultimately tipped the balance for Crater Lake was an endorsement from the nation’s most prominent forester, Gifford Pinchot. Grateful to Steel for defending the Oregon reserves six years earlier, Pinchot reported to President Theodore Roosevelt that the Crater Lake legislation was stalled in the House of Representatives because Speaker Thomas Henderson would not allow it and other national park bills to be debated. Some congressmen saw national parks as a drain on the Treasury and serving few constituents since most Americans had yet to see an automobile. Roosevelt succeeded in cajoling Henderson to allow a floor vote, and the bill passed in both chambers so that Roosevelt could sign it into law on May 22, 1902.

Steel, however, considered his campaign for Crater Lake National Park far from finished. He became the park’s first concessionaire in 1907, put the first tour boats on Crater Lake, and selected a site for the Crater Lake Lodge. As the park’s second superintendent in 1913, he encouraged a former business partner, Alfred Parkhurst, to finance construction of the lodge and then open it in 1915. He garnered enough support in Congress to have the Army Corps of Engineers build the first Rim Road around the lake. He also served as park commissioner at Crater Lake from 1916 until his death in 1934.

Steel was also the first president of the Oregon Geographic Names Board, from 1908 to 1911, and he helped organize the Oregon Historical Society more than a decade earlier.

He married Lydia Hatch in 1900 and the couple had one daughter, Jean. Although his characteristic zeal and perseverance reflected Calvinist roots, he sent his daughter to a Catholic high school in Medford to defy the Ku Klux Klan’s hold on southern Oregon following World War I.

Steel Bay at Crater Lake, Mount Steel in the Olympic Mountains, and Steel Cliff on Mount Hood are named for him. 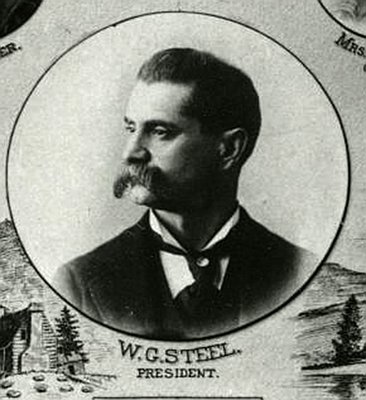 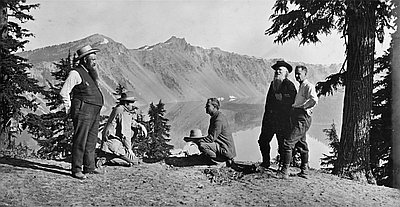 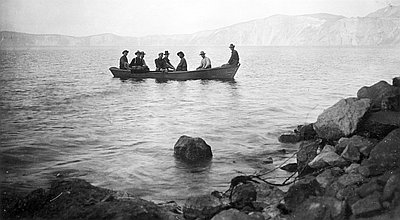 Weiselberg, Erik. "He All but Made the Mountains: William Gladstone Steel, Mountain Climbing, and the Establishment of Crater Lake National Park." Oregon Historical Quarterly 103:1 (Spring 2002), 50-75.