Fiery crosses and marchers in Ku Klux Klan (KKK) regalia were common sights in Oregon and the nation during the 1920s. The social and economic problems following World War I only partly explain why this organization, with its southern heritage of racism and violence, appealed to the overwhelmingly white, native-born, and Protestant population of Oregon.

While the Klan may have been new to the state, the attitudes and issues it exploited were not. Racism, religious bigotry, and anti-immigrant sentiments were deeply entrenched in the laws, culture, and social life of Oregon, and few Oregonians questioned the Klan's doctrines of white supremacy, Protestantism, and "One-Hundred Per Cent Americanism."

The first Klan organizers (Kleagles) arrived in Oregon from California and the South in early 1921. Maj. Luther I. Powell, a gregarious Louisianan, swore in the first Oregon Klansmen in Medford while his fellow Kleagles recruited in Portland, Eugene, Salem, Astoria, Hood River, Pendleton, and other communities. Historians estimate that the national Klan attracted more than two million members during the 1920s, and by 1923 Oregon Klan leaders claimed 35,000 members in more than sixty local chapters and provisional Klans. Hundreds of other Oregonians joined the Women of the Ku Klux Klan, the Junior Order of Klansmen for teenagers, and the Royal Riders of the Red Robe for foreign-born Protestants.

The Klan spread rapidly in Oregon, but internal strife plagued it from the beginning. After his election as the first Exalted Cyclops (leader) of Klan No. 1 in Portland, Fred L. Gifford forced Powell from Oregon and became the Grand Dragon (head) of the state Klan. From their Portland headquarters, Gifford and his cronies—including Lem Dever, the colorful editor of the Oregon Klan's newspaper, The Western American—turned the organization into a potent and controversial political machine during the elections of 1922 and 1924.

The Klan's appeals to morality and patriotism initially masked the reality: the political intrigue and social conflict and the loyalty to the Klan that transcended political party affiliations. In 1922, Klansmen won election to local and county offices throughout Oregon, and some Klansmen won seats in the state legislature. The Klan helped elect LaGrande Democrat Walter M. Pierce as governor and played a significant role in passing an initiative measure requiring all children eight to sixteen years of age to attend public schools. While targeting Roman Catholics, the compulsory school bill would have eliminated other private and denominational schools.  As the only state to pass such a law, Oregon gained notoriety and faced numerous legal challenges. The law was never implemented, and the U.S. Supreme Court declared it unconstitutional in 1925.

Klansmen and their allies in the 1923 legislature resurrected controversial racial and religious issues rejected in earlier years. A bill prohibiting the ownership of land by aliens, aimed primarily at Japanese immigrants, passed easily. Other successful bills with connections to the Klan banned teachers from wearing religious garb in the public schools and blocked public schools from using civics and history textbooks with negative remarks about the Founding Fathers and American heroes. The Klan's political agenda also included support for bills to improve state roads and public education.

The Klan's influence on social and cultural life was more damaging and longer lasting than its political successes. The Oregon Klan had its share of charlatans and characters, but the overwhelming majority of members were ordinary Oregonians who represented a cross-section of their communities. Few members engaged in violence. Many local Klans strengthened fraternal bonds by organizing bands, baseball teams, family picnics, and charitable activities. But members also used the Klan to impose their moral and cultural beliefs on other Oregonians, often splintering communities, churches, and social organizations. Numerous Protestant ministers, largely fundamentalist and evangelical, joined or supported the Klan, and several became prominent spokesmen for its anti-Catholic crusade. As the official Klan Lecturer in Oregon, the Rev. Reuben H. Sawyer enthusiastically proclaimed "The Truth about the Ku Klux Klan" to many audiences, including a crowd of several thousand at Portland's Municipal Auditorium in December 1921.

Opponents of the Klan struggled to find allies. Most Oregonians did not join the Klan, but many supported its agenda and others declined to challenge it. Members of some religious denominations and social and fraternal organizations, minority groups, and a few politicians, including Republican Governor Ben Olcott, vigorously opposed it. The Medford Tribune, the Salem Capital Journal, the Hood River News, the Pendleton East Oregonian, the Portland Telegram, the Portland Advocate, and the Catholic Sentinel editorialized against the Klan, while most local newspapers supported it or took a neutral stance.

Dramatically successful initially, Gifford soon alienated members with his dictatorial style. By 1924, Klansmen outside Portland, long wary, turned against him. As charges of corruption and sexual scandals plagued the Klan in other states, most Oregon Klansmen quit the organization. Some local Klans survived into the 1930s, but attempts to revive the state organization failed. During the Civil Rights Era, when new waves of Klan violence swept the South, the hooded order was only a fading memory in Oregon. Newer extremist groups, while often more militant, have been much smaller and far less successful in Oregon than the Ku Klux Klan of the 1920s. 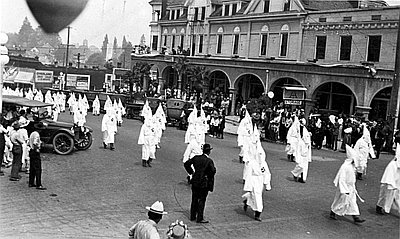 Horowitz, David A. "Order, Solidarity, and Vigilance: The Ku Klux Klan in LaGrande, Oregon." In The Invisible Empire in the West: Toward a New Historical Appraisal of the Ku Klux Klan of the 1920s. Shawn Lay, ed. Urbana: University of Illinois Press, 1992, 2004.

Horowitz, David A., ed. Inside the Klavern: The Secret History of a Ku Klux Klan of the 1920s. Carbondale: Southern Illinois University Press, 1999.

Toy, Eckard V. "Robe and Gown: The Ku Klux Klan in Eugene, Oregon, during the 1920s." In The Invisible Empire in the West: Toward a New Historical Appraisal of the Ku Klux Klan of the 1920s. Shawn Lay, ed.Urbana: University of Illinois Press, 1992, 2004.