Minor White was an American photographer, teacher, and writer whose career began in Oregon during the New Deal (1937-1942), when he documented historic buildings and landscapes and taught photography. In 1952, he was the editor of Aperture, a journal of photography he founded with Ansel Adams, Dorothea Lange, and others. In his photography, writing, and teaching, he combined metaphysical ideas and technical excellence—what he termed “the lyrical and the accurate.” White considered his time in Oregon formative, and he expanded his craft and relationships on many visits to the state after World War II.

Minor Martin White was born in Minneapolis, Minnesota, on July 9, 1908, the only child of Charles and Florence White. He studied botany at the University of Minnesota, along with verse and poetry, interests that he continued to pursue after graduating in 1932.

In his writings, White grappled with his repressed homosexuality and how to discern manifestations of spirit in the visible world, a search that continued after he decided in 1937 to change medium and location. He sold most of his belongings, keeping a handheld camera, and took a bus trip west. Arriving in Portland that summer, out of money, he decided to stay, to get a job, and to capture the “taste of Poetry” using photography.

White immersed himself in photography during 1937 and 1938. He used the darkrooms at the Oregon Camera Club, bought better medium-format cameras, and read “all the books” and periodicals that Portland Central Library had on technical and artistic approaches to photography and its history. His work focused nearby, on the YMCA where he roomed and on the cast iron-fronted buildings on the Portland waterfront, many of them derelict and threatened with demolition.

Throughout 1938, White led a camera club and taught at the YMCA, building a circle of friends and students. He wrote a how-to column on photography for a local outdoors magazine in which he sought to eliminate barriers between amateurs seeking to learn and accomplished photographers. He also recommended thinking about the effect a photo would have on viewers before taking it.

In August of that year, Emerson J. “E.J.” Griffith, the administrator of the Works Progress Administration in Oregon, successfully lobbied to expand the Federal Art Project in Oregon “with photography as a logical phase of the Art Program.” Margery Hoffman Smith, the Art Program’s assistant director, had incorporated Oregon history into several of its projects, including paintings for public schools, and she wanted to document Portland’s historic buildings in photographs. White was hired in October, with Smith as his supervisor, but he wanted to do more. “I have decided not to document them,” he wrote in his journal, but “to render them in such a way that anyone looking at the images will re-experience something of the pride the Portlanders of 60 years ago must have felt for their new city.”

White concentrated on the cast iron-fronted buildings in the city’s old business district, the Portland Hotel, the Pioneer Post Office, and residences, from which his first portfolios were compiled by June 1939. He added Portland’s waterfront to the scenes he captured later that year and into early 1940. His work, exhibited at WPA art centers in the West through 1941, was praised as historical record by architectural critic Henry Russell-Hitchcock and by a newspaper as art created with “a simple, direct and forceful approach.” White also adapted a theory of sequences in stage acting to organize photographs he took of Portland Civic Theater productions, and he continued to teach at the YMCA and in camera clubs.

White’s duties shifted after the WPA reorganized in late 1939 and the renamed Oregon Art Project, with Smith as director, received more funding. He taught at and was appointed director of the community art center in La Grande, where he moved in June 1940. His photographic vision deepened in eastern Oregon, where he gained insights and lasting friendships. The Portland Art Museum featured White’s work from this period in his first solo exhibition in early 1942 and commissioned his photographs of the Knapp and Dolph houses, two historic Portland residences that were demolished soon thereafter.

By the time of the exhibit, White had been drafted to serve in the Pacific. Many of the buildings he had photographed were being demolished in a WPA-funded project, supported by E.J. Griffith, that transformed Front Avenue into Harbor Drive, a major highway on the Willamette River. But White’s record of the city remained, as did his connections to it. In 1951, he juried a show at the Portland Art Museum with Ansel Adams, who by this time had recruited him to teach at San Francisco’s California School of Fine Arts. White continued teaching and codified Adams’s zone system of exposure, development, and printing in his classes and in a manual that influenced photographers around the world.

In 1959, the Oregon Camera Club included several of White’s WPA photographs in the exhibit This Land, This Oregon at the Oregon centennial exposition. One of the club’s leaders recruited him to teach a workshop, which continued yearly in Oregon until 1967. He also exhibited his own retrospective, “Sequence 13/Return to the Bud,” at the exposition. “I feel that a trajectory that started in Portland, Oregon, in 1938,” he wrote, “has been completed.”

White’s photographs proved to be exemplars of Portland’s architectural and artistic history. They are in the collections of the Portland Art Museum, the Oregon Historical Society, the Metropolitan Museum of Art, and the J. Paul Getty Museum and in his archive at the Princeton University Art Museum.

Minor White died on June 24, 1976. He had wanted those who saw his first photographs to feel the pride early Portlanders had in their city, and the result was a timeless public record of Oregon that was both lyrical and accurate. 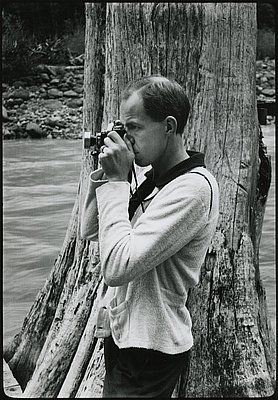 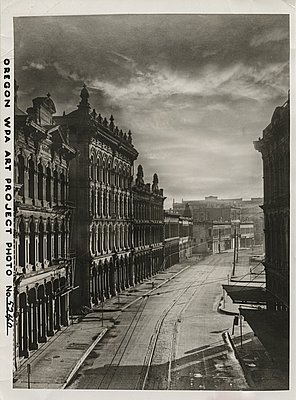 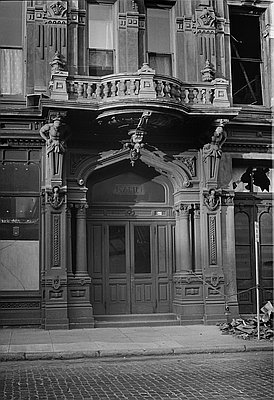 Portland is home to the second largest collection of cast-iron architecture in the United States, just behind New York City’s historic Soho District. Cast-iron-fronted buildings were constructed in Portland between the 1850s and 1880s, with a large concentration along the west-side waterfront.

Though iron had existed as a building material …

One of America’s best-known photographers, Dorothea Lange captured some of the most evocative and recognizable images of Oregon during the Great Depression. From 1935 to 1939, she worked as a field investigator and photographer with the Resettlement Administration, a New Deal agency that was subsumed by the new Farm Security …

Margery Hoffman Smith, a painter and interior designer, was called the “grande dame of arts and crafts” for her work at Timberline Lodge on Mount Hood. She also encouraged the formation of the Asian Art Society at the Portland Art Museum in 1974 and contributed funds for a gallery …