The Portland Art Museum, which opened in 1895 in the city library with casts of classical sculptures and prints of European paintings, is a nationally respected mid-size museum with a collection of some 42,000 original artworks representing a wide range of cultures and media. Since 1932, it has been located on Southwest Park Avenue; in 2005, the museum opened additional galleries in the former Masonic Temple next door.

The museum was established by the Portland Art Association, organized in 1892 by businessman Henry W. Corbett and six other community leaders who determined “to make a collection and erect and maintain a building” for the cultural enhancement of the city. With funds provided by Corbett, lumberman Winslow B. Ayer and his wife traveled to Europe to select 100 casts of Greek and Roman sculptures. These and 15,000 prints of European paintings comprised the museum’s collection.

The Lewis and Clark Exposition of 1905 inspired Portland leaders with a new level of cultural ambitiousness, and that year the Portland Art Museum moved to its own building, designed by the Portland firm Whidden and Lewis at the corner of Southwest Fifth and Taylor. The opening exhibition, curated as part of the Exposition by painter Frank Vincent Dumond, showed art from American and European collections. The museum acquired its first original work in 1908: Afternoon Sky, Harney Desert, painted that year by American artist Childe Hassam while visiting Oregon to paint with his friend C. E. S. Wood, a Portland Art Association founder. In 1911, the museum acquired its first original sculpture, the bronze Indian on Horseback by A. Phimister Proctor.

The collection of original art, all donated or purchased with donated funds, grew steadily—in 1917, the museum owned 26 paintings and 133 prints by Giovanni Battista Piranesi, among other objects—and by the 1930s bequests provided funds for a modest purchase program. Meanwhile, the museum hosted significant traveling exhibitions, at times provocative ones. In 1913, it showed excerpts from the infamous Armory Show of European and American avant-garde art, which included Marcel Duchamp’s Nude Descending the Staircase, a cubist-futurist composition that one New York critic described as “an explosion in a shingle factory.” Many considered the painting scandalous. In 1923, Sally Lewis organized an important exhibition of contemporary European and American art. Blaue Reiter German Expressionist paintings were exhibited in 1927.

Despite the onset of the Depression, the Portland Art Association commissioned Italian-born architect Pietro Belluschi, then a member of A. E. Doyle’s Portland firm, to design a larger building, made possible by a lead gift of $100,000 from Winslow B. Ayer. Blending classical symmetry and the traditional materials of brick and stone with a modernist clarity, Belluschi’s proposal created an uproar that Frank Lloyd Wright was asked to help quell. Belluschi's design was accepted even though museums heretofore had been designed as temples.

The first phase of Belluschi’s building (the Ayer Wing) opened in 1932, with the Solomon and Josephine Hirsch wing (also of his design) opening in 1939 and the Hoffman wing (partly Belluschi’s design) opening in 1969 to provide a sculpture court, auditorium, and new quarters for the Museum Art School (founded in 1909; now the independent Pacific Northwest College of Art). In 2000, remodeling of the Hoffman wing provided new galleries; in 2005, the museum further expanded into the Masonic Temple, remodeled as the Mark Building.

The Portland Art Museum is noted for its collections of Asian, African, Native American, Pre-Columbian, European, and American art, including Pacific Northwest art. It owns an extensive collection of silver objects. The Northwest Film Study Center, founded in 1971, was incorporated into the museum in 1978. In 1993, the Gilkey Center for the Graphics Arts opened, featuring the print collection assembled by Gordon Gilkey.

Gilkey, a retired Oregon State University administrator, served as curator of prints from 1978 until his death in 2000. He expanded the collection of 7,000 works that he donated to 25,000 works, significantly enriching the Pacific Northwest print culture that artist William Givler, long-time dean of the Museum Art School, had helped initiate in the 1930s.

Other key figures in the history of the museum’s leadership were Henrietta Failing, the first curator, and Anna B. Crocker, who held the dual position of curator of the museum and principal of the school from 1909 to 1936. Directors included Robert Tyler Davis, whose particular interest was Native American art; Thomas Colt, who was pictured with selections from the museum’s collection in a photograph by Arnold Newman in a Life profile on American museums in 1950; Francis Newton, who donated to the collection prints by Edvard Munch, Leonard Baskin, and others; and the entrepreneurial John E. Buchanan Jr., who organized blockbuster exhibitions that attracted huge crowds in the 1990s and who oversaw the acquisition of the Masonic building. A legendary mid-century curator was Rachael Griffin (1900-1983), who advocated for the work of contemporary Pacific Northwest artists, interviewed artists and art leaders on her radio show, and curated exhibitions of regional art that linked the museum to the community.

The museum’s holdings comprise gifts of individual artworks as well as entire personal collections, including the Sally Lewis collection of antiquities (1926), Mary Andrews Ladd collection of Japanese prints (1932), Winslow B. Ayer’s bequest of French Impressionist and American paintings (1935), the Samuel H. Kress Foundation gift of Renaissance and Baroque paintings (1961), and the Paul and Clara Gebauer collection of Cameroon art (1970). Through a subscription campaign, the museum raised funds to purchase the Axel Rasmussen Collection of Northwest Coast Native American Art (1948), and proceeds from a successful Vincent Van Gogh exhibition in 1959 were used to purchase Monet’s Waterlilies. In 2001, the museum purchased the critic Clement Greenberg’s collection of modern art. Family and individual bequests also provide acquisition funds.

Though its holdings and exhibitions range widely and seek to embrace a global perspective, the Portland Art Museum continues to address the work of Pacific Northwest artists. The Arlene and Harold Schnitzer Center for Northwest Art, established in 2000, includes a two-floor gallery that displays selections from the museum’s historic and contemporary regional collection. The museum honors selected artists with Contemporary Northwest Art Awards each year.

In 2016, the museum announced plans for the Rothko Pavilion that will  connect the Belluschi and Mark buildings as a glass-sheathed structure  providing new exhibition and public spaces including an open passageway linking Tenth and Park Avenues. Designed by the Chicago firm Vinci Hamp Architects, the pavilion was approved by Portland’s Historic Landmark Commission in March 2019. It is named for the internationally renowned  artist Mark Rothko (1903-1970), who as a youth lived in Portland. 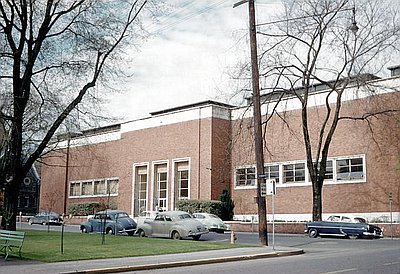 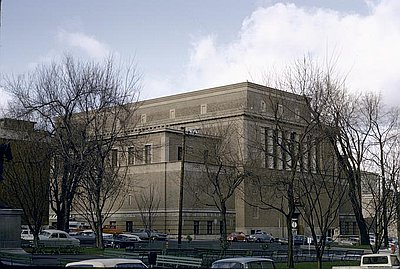 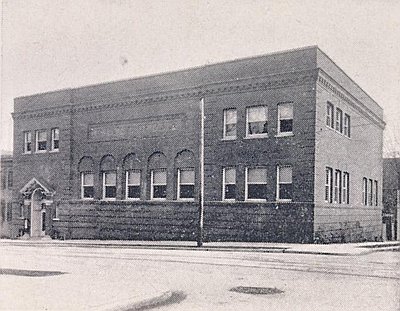 Alexander Phimister Proctor, an American sculptor known for monumental bronzes of animals and human figures, placed six major works in Oregon private collections and public places between 1911 and 1932. These remain on view in Salem, Eugene, and Pendleton, as well as in Portland, where, he asserted, “art appreciation . …

C.E.S. Wood may have been the most influential cultural figure in Portland in the forty years surrounding the turn of the twentieth century. He helped found the Portland Art Museum and was instrumental in making the Multnomah County Library a free and public institution. He secured the services of his friend …

Childe Hassam, though not an Oregonian, created some of the best-known paintings of Oregon's landscape. A New Englander by birth (October 17, 1859) and choice, he was educated in Boston and Paris. Arguably one of America's best impressionist painters, he was a member of "The Ten," a group of painters formed to challenge …

In 1933, at the height of the Great Depression, Mark Rothko and his wife Edith Sachar hitchhiked across the United States from New York City so that he could introduce her to his family in Portland. During their stay, the couple camped in a tent in Washington Park, and Mark …

Pietro Belluschi of Portland was an internationally known architect and a key innovator in the development of an elegant modernism, especially in residences suited to the materials and climate of the Pacific Northwest. His work won him widespread admiration and resulted in his appointment as dean of the School of …

The Portland Art Association (PAA) was organized on December 12, 1892, by citizens interested in developing a collection and providing a space where art could be studied. PAA was created with a $1,000 total investment from local businessmen and politicians, including Henry W. Corbett, Henry Failing, Dr. Holt C. Wilson, …