Pietro Belluschi of Portland was an internationally known architect and a key innovator in the development of an elegant modernism, especially in residences suited to the materials and climate of the Pacific Northwest. His work won him widespread admiration and resulted in his appointment as dean of the School of Architecture and Planning at the Massachusetts Institute of Technology.

Born in Ancona, Italy, Belluschi studied engineering in Rome. After serving in the Italian army during World War I, he earned the equivalent of a bachelor's degree in civil engineering in 1922 at the University of Rome. With a scholarship, he attended Cornell University, where he received a graduate degree in engineering in 1925. After working briefly as an electrical engineer in Kellogg, Idaho, he relocated to Portland early in 1925 with a letter of introduction to A.E. Doyle, the most acclaimed architect in the city.

Belluschi rose quickly in Doyle's office, A.E. Doyle & Associate (the associate being William H. Crowell), and by 1927 had become the firm's chief designer. After Doyle’s death in 1928, Belluschi ran the office. In 1942, he purchased the firm outright and reorganized it under the name Pietro Belluschi, Architect.

In 1931-1932, Belluschi designed and built the Portland Art Museum. Though classically symmetrical and built of traditional brick, it was one of the first museums in the United States designed in the severe modern style, anticipating the Museum of Modern Art building in New York City by eight years. Influenced by John Yeon (the architectural designer of the Aubrey Watzek house in 1936-1938), Belluschi also developed a unique Pacific Northwest Modernism that exploited wood for a series of residences and churches built from 1938 to 1948. Most notable among those designs is the Jennings Sutor house (1937-1938) and the John Platt house (1940-1941) in Portland; the Peter Kerr beach house (1941) in Gearhart; and the Percy Menefee house (1946-1948) in Yamhill.

Belluschi’s position as a leader in the modern movement was secured nationally and internationally with his design of the Equitable Building (Commonwealth Building) in Portland in 1944-1948. With sheer vertical planes, the flat-roofed, glass-enclosed box—sheathed in aluminum over a reinforced concrete frame and glazed with large, fixed, double-pane thermal windows—presented features that became the standard in later office buildings across the United States. Equally influential was its incorporation of the first large-scale heat-pump system for heating and cooling, a feature that earned the building recognition as a National Historic Mechanical Engineering Landmark in 1980.

The Equitable Building was the first major glass-skinned, modernist corporate office building completed in the nation after World War II. Belluschi’s subsequent modernist buildings of the 1940s and 1950s include the Oregonian Building (1945-1948) and the Federal Reserve Bank (1948-1949) in Portland and the Marion County Courthouse in Salem (1950-1954).

When Belluschi was named dean of the School of Architecture and Planning at M.I.T in 1950, he sold his Portland practice to the large international partnership, Skidmore, Owings & Merrill, but he continued to consult and design. Among his churches during this period was the Portsmouth Abbey Church in Rhode Island (1952, 1957-1961). He also worked collaboratively with other architects to design the Juilliard School of Music and Alice Tully Hall (1956) and the Pan American Building over Grand Central Terminal (1963-1973) in New York City; the Bennington College Library (1962); the Rohm & Haas Building (1962-1964) in Philadelphia; St. Mary’s Cathedral (1963-1970) in San Francisco; the Church of the Redeemer (1954-1958) and Meyerhoff Symphony Hall (1972-1982) in Baltimore; and the Bank of American Building (1964-1969) in San Francisco. He collaborated on seventeen churches and four synagogues across the country.

Belluschi continued his consulting practice after retiring from M.I.T. in 1965. In 1973, he returned to Portland, where he purchased and lived in the Burkes house, which he had designed in 1944. After 1975, he designed six churches and a synagogue, most in the Pacific Northwest. Among the best of these were his Immanuel Lutheran Church (1975) in Silverton, which was lost to an arson fire in 1995, and his Chapel for the University of Portland (1985-1986), which incorporated liturgical changes promulgated by the Second Vatican Council.

During the second half of the twentieth century, Belluschi was a major architectural visionary in Oregon and the United States. He was admired for his use of fine craftsmanship and careful detailing, his response to regional conditions, and his preference for classical clarity of form. 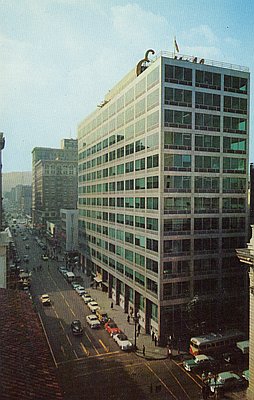