Childe Hassam, though not an Oregonian, created some of the best-known paintings of Oregon's landscape. A New Englander by birth (October 17, 1859) and choice, he was educated in Boston and Paris. Arguably one of America's best impressionist painters, he was a member of "The Ten," a group of painters formed to challenge what they saw as conservative romanticism in American art. By the turn of the 20th century, Hassam was famous for his scenes of urban life, often New York City.

His passion for nature is evident in his habit of spending summers traveling and painting in the rural areas in New England—coastal villages such as Cos Cob and the Isle of Shoals. An invitation by C.E.S. Wood to visit Oregon brought him to the state in 1904. Hassam had been commissioned by the Wood family to paint a mural for their library, and he came to install it, meet Wood, and paint the landscape of Oregon. During his two-and-a-half-month visit he painted the Oregon coast, Mount Hood, and the Cascade Mountains as well as some of southeastern Malheur County. Wood, who had served as an agent for several artists here, hoped to encourage patronage of Hassam's work among several Portland families.

A second trip to Oregon, in 1908, was primarily focused on the Harney desert in Malheur County. Hassam and Wood often painted side by side; photos exist of the two artists with their easels set up, painting the same scene outdoors in Eastern Oregon. Wood was an amateur artist of respectable talent, and some of those paintings still exist.

When the two returned to Portland in late October, thirty of Hassam's paintings from the trip were placed on exhibition at the Portland Art Museum. Wood was one of the original founders of the museum (in 1905), and the board voted to purchase Hassam's striking Afternoon Sky, Harney Desert as the first painting in the collection of the new museum. Another painting from that trip, Golden Afternoon, was purchased for the collection of the Metropolitan Museum of Art in New York City.

Hassam was a prolific artist, adept in drawing, printmaking, watercolor, oil and pastels. He created still-life and figurative work in addition to landscapes. Hassam continued to travel widely, including a trip to California in 1914. He died at age 75 in 1935.

The Portland Art Museum owns many of Hassam's Oregon works and frequently exhibits them. 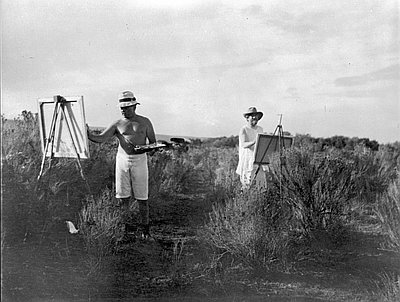 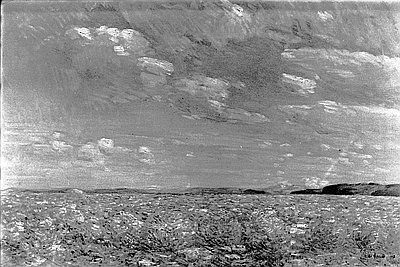