Margery Hoffman Smith, a painter and interior designer, was called the “grande dame of arts and crafts” for her work at Timberline Lodge on Mount Hood. She also encouraged the formation of the Asian Art Society at the Portland Art Museum in 1974 and contributed funds for a gallery at the museum focused on antique Oriental art. “Nobody was quite like Margery Hoffman Smith,” F. Herbert Hoover wrote. “When she stopped by my gallery [in San Francisco], the paintings always seemed to become somewhat brighter. She was...a seasoned artistic observer, and the paintings seemed to recognize that quality about her.”

Smith was born in Portland in 1888. Her father was Lee Hoffman, who built the Morrison Bridge, the first bridge across the Willamette River. Her mother was Julia Christianson Hoffman, the first person to “walk across the Willamette” and founder of the Arts and Crafts Society (1907), renamed the Oregon College of Art and Craft (closed in 2019). Smith was a lifetime benefactor of the college, and her large donation in 1975 helped the school to develop in its location on southwest Barnes Road in Portland.

Smith graduated from Bryn Mawr in 1911. She studied design at the Art Students League in New York and painting at the Museum Art School in Portland. She married Ferdinand C. Smith during World War I. In the 1940s, they moved to San Francisco, where Ferdinand Smith became a partner in Merrill, Lynch, Pierce, Fenner & Beane. In 1950, he was named to the board of governors of the San Francisco stock exchange.

Smith is best known for her work at Timberline Lodge, a Works Progress Administration project on Mount Hood. As assistant state director of the Federal Art Project, she was in charge of the handcrafted furnishings that were made for the lodge. She worked with the woodworking and metal shops to design and execute furniture and wrought-iron furnishings for the interior. Under her supervision, seamstresses on the Women’s and Professional Project created hand-appliquéd draperies, hand-woven upholstery and draperies, and hand-hooked rugs for the public areas and guestrooms. She also commissioned or selected oil paintings, watercolors, hand-colored lithographs, opus sectile glass murals, and carved and painted linoleum murals to decorate the lodge.

About her work at the lodge, she told the Oregonian, “carpenters became cabinet makers, blacksmiths became art metal workers and sewing women wound up expert drapery makers.…We made furniture from scrap iron, wood and rawhide.…The building dictated the style-overscaled and related to the great, snow-capped mountain.”

Smith lectured widely about the role of craft in the contemporary world, drawing on her experience with the WPA to encourage the development of community centers for craft. In one talk, "The Future of Handcraft in the Modern World," she remembered "the great interest that was taken in Salem in weaving. There the community drew on the native grown flax which was spun in local mills. Learning to weave at the Salem Art Center, at least seventy women became proficient weavers in that very small town. One group of them incorporated under the name of Mt. Angel Weavers and have been marketing linen towels to many of the large department stores both East and West."

A pioneer among professional women, Smith received a Governor’s Arts Award in 1979. She died on March 8, 1981. Her papers are in the Archives of American Art at the Smithsonian. 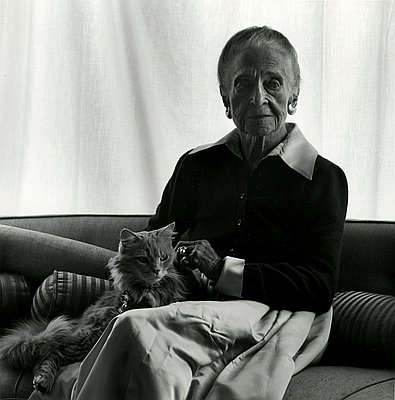