Henry Thiele was a Portland restaurateur, chef, and socialite whose eponymous restaurant was a city landmark for more than a half century. His culinary accomplishments made a distinct impression on Oregon food maven James A. Beard, who experienced Thiele’s cooking in his youth and described him as having “a fawning manner and great ambition, but he was a great, creative chef.” Thiele’s social connections conferred celebrity chef status on him from the 1920s until his death in 1952.

Henry Thiele was born in Hanover, Germany, on April 5, 1882. His father, who died in 1885, was a hotel proprietor; his mother died in 1898. Henry’s training in matters culinary apparently began early, after an education in Germany and France. He was a confectioner in Switzerland and a chef’s apprentice in Berlin. In 1904, he came to the United States, where he found work in New York City at the Waldorf Astoria and then the Holland House hotels. He subsequently appears to have traveled and worked in San Francisco, Nome, Alaska, and Seattle, where he was chief steward at the Rathskeller and ran the Frye Hotel coffee shop. He lived briefly in Canada before arriving in Portland in 1914. In 1908, he married Margaret Anderson, with whom he had four children.

In Portland, the entrepreneurial Simon Benson hired Thiele as the chief steward of his new Benson Hotel, which opened in 1913. The hotel competed for the luxury trade with the Portland Hotel (1890) and the Multnomah Hotel (1911), and Henry Thiele's urbanity and menus soon made the Benson a social and culinary success. In the 1920s, with the backing of Simon Benson and other prominent business figures, Thiele opened a restaurant in the residential Sovereign Hotel, took on the management of Benson’s new Columbia Gorge Hotel in Hood River, and opened a restaurant on Southwest Tenth Avenue that specialized in group dining, popular with bridge clubs. Not all of these ventures were successful, and at one point Thiele faced bankruptcy; but he was apparently rescued by friends in the business community.

Thiele’s wife Margaret died in December 1930, in the midst of plans to open a new restaurant on West Burnside Street at Northwest Twenty-Third Avenue. The establishment opened on April 14, 1932, in a distinctive stucco Mediterranean-style building that could seat 150 diners and had parking for 100 automobiles. Named Henry Thiele’s, the restaurant was an immediate success, offering an extensive, European-influenced menu that changed every day. Henry Thiele’s was especially noted for its salmon dishes, lentils and wurst, Princess Charlotte pudding, and an enormous and puffy egg-and-lemon-and-powdered-sugar dish known as a German pancake or Dutch baby (served on a turkey platter).

When he opened the new restaurant, Henry Thiele hired Margaret MacDonald from the Imperial Hotel. They formed a strong team and were married in 1943. With Margaret as the supervisor, he contracted to feed some 25,000 workers at the Kaiser Portland and Vancouver shipyards during World War II.

Henry Thiele died on January 4, 1952. Margaret Thiele Petti operated the restaurant until it closed in 1990. She died in 2001. The buildings and parking lot that are now on the site of his restaurant are named Thiele Square. 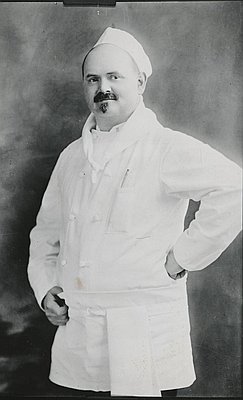 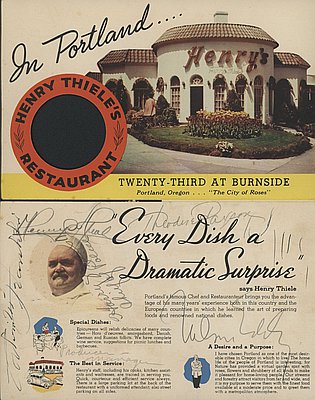 Greg Higgins, a prominent figure in the development of Northwest cuisine and a national voice for sustainable dining, was raised in a rural area south of Buffalo, New York, working in the family garden and at a local cheesemaker. Higgins trained in restaurants locally and in Europe before moving to …

The Portland Hotel (originally called the Hotel Portland), a project initiated by Henry Villard and the Northern Pacific Railroad, was designed in 1882-1883 and constructed in 1888-1890. The hotel established a new standard in elegance for accommodations in Portland and introduced patrons and local architects to the latest architectural trends …