At their peak at the end of 1942, the shipyards in the Northwest employed 97,000 workers, including many migrating from outside the region. The shipyard boom played a major role in reshaping the social, political, and economic history of Portland, which had a pre-war population of 340,000 residents.

Kaiser’s Northwest shipyards, and four other Kaiser shipyards in Richmond, California, contributed heavily to supporting the war effort during World War II. Best known for constructing cargo vessels known as Liberty ships and their successor Victory ships, the Kaiser shipyards also built small aircraft carriers, tankers, and other vessels. In total, workers in all seven Kaiser shipyards assembled 1,552 vessels out of the 5,601 ships commissioned by the U.S. Maritime Commission between 1939 and 1945. (Additional deliveries for private companies and foreign governments brought wartime production of U.S. shipyards to 5,777 vessels.)

The largest Kaiser shipyard in the Northwest was the Oregon Shipbuilding Company, often shortened to Oregonship, located on the Willamette River northwest of Portland’s St. Johns neighborhood. Opening in 1941, Oregonship initially built merchant ships for the British government, which had suffered heavy losses from German U-boat missile attacks on its merchant fleet, but it soon produced ships for the U.S. Maritime Commission. The original 87-acre site grew to more than 300 acres.

The Kaiser Company next opened the nearly 200-acre Vancouver Shipyard on the Columbia River, upstream from the Interstate Bridge. It began production in early 1942 with an initial payroll of 38,000 workers. The Kaiser Company next launched the Swan Island shipyard on nearly 400 acres that had served as Portland’s Municipal Airport. That shipyard began operation in July 1942. Edgar Kaiser, Henry Kaiser’s son, managed all shipyard operations.

With Kaiser’s active recruitment, the shipyards attracted workers from across the nation, particularly from the South. Thousands of African Americans contributed to an increase in Portland’s Black population, which grew from 1,800 before the war to an estimated 15,000 in 1946. Kaiser also attracted some of the estimated 40,000 Native Americans who left reservations for the first time to work in defense industries. In addition, the shipyards brought large numbers of women into the industrial workforce; women constituted about 30 percent of the shipyard workforce at the end of 1942.

To fill the intense need for worker housing, Kaiser built the city of Vanport on Portland’s northern edge. Vanport contained 9,942 units, which housed 42,000 men, women, and children. Kaiser established social services and a health care system for workers, which became the foundation of the Kaiser Permanente health care system. Vanport was destroyed by flood in 1948.

The U.S. government’s greatest need was for Liberty ships to transport troops and cargo. The ships were built to a standardized design, with some 250,000 parts prefabricated throughout the country in 250-ton sections and welded together at the shipyards. At 441 feet long and 56 feet wide, the Liberty ships operated at a speed of 11 knots. Built for just under $2 million, each could carry 2,840 Jeeps, 440 tankers, or 230 million rounds of rifle ammunition.

The Northwest’s first Liberty ship, the nation’s second, was the Star of Oregon, launched from Oregonship on September 27, 1941. Construction of that first ship took 131 days, but production speed increased dramatically at all Kaiser shipyards as the war progressed. By 1943, Kaiser workers were producing a Liberty ship on average in just 42 days, completing three each day.

Oregonship established a speed record for construction of the Liberty N. Teal, completed ten days after its keel was laid, and President Franklin D. Roosevelt secretly attended the ship’s christening by his daughter Anna Boettiger. That record fell in November 1942 when the SS Robert E. Peary was assembled in four days, 15 hours, and 29 minutes in a Kaiser Richmond shipyard.

Kaiser’s Northwest shipbuilding operations quickly ended after the war. By the end of 1945, only about 10,000 men and 2,000 women worked in the three Northwest yards. Operations soon ceased completely. Shipyard and industrial workers had made a significant contribution to the war effort, but many later suffered from severe health problems due to their exposure to asbestos. 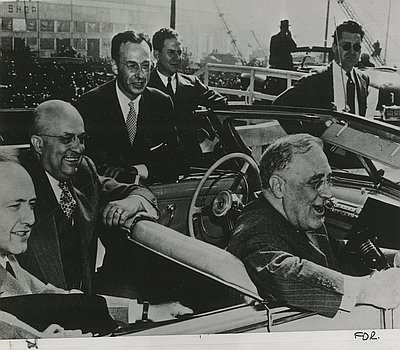 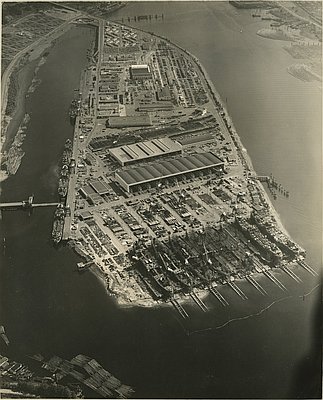 Kaiser Permanente is an integrated healthcare organization consisting of three distinct entities: Kaiser Foundation Health Plan, Kaiser Foundation Hospitals, and separate autonomous medical groups. It provides service in nine geographical regions, each with its own administration and Permanente medical group. The national headquarters is in Oakland, California. Medical services in …

Swan Island sits about eight miles above the mouth of the Willamette River. The island has played a significant role in the development of waterborne commerce in Oregon and the history of the Port of Portland. It was first noted as Willow Island on an 1844 chart by Lt. John Wilkes …

Between 1940 and 1943, defense employment in the Portland and Vancouver area climbed from …