Greg Higgins, a prominent figure in the development of Northwest cuisine and a national voice for sustainable dining, was raised in a rural area south of Buffalo, New York, working in the family garden and at a local cheesemaker. Higgins trained in restaurants locally and in Europe before moving to the Pacific Northwest in 1980. Four years later, he took a position first as sous-chef and then as head of the kitchen at the reopened Heathman Hotel in Portland.

At the Heathman, Higgins built relationships with local growers and fishermen and developed a "sustainable" cuisine that relied on seasonal foods that do not deplete the lands and waters that produced them. Ten years later, he took this philosophy to his own restaurant at Higgins, including a menu that was one-third vegetarian--at a time that was a rarity.

At the same time, Higgins became a founding member and head of the Portland chapter of Chefs Collaborative, a national organization whose goal is to "promote sustainable cuisine by celebrating the joys of local, seasonal, and artisanal cooking." He became a national voice on the issue and a prominent advocate for Northwest cuisine, a regional variation on the locally based "California cuisine" advocated most prominently by Alice Waters in Berkeley, California.

In 2002, Higgins was chosen Best Northwest Chef by the James Beard Foundation, and in 2005 his restaurant was selected by Nation's Restaurant News for the Fine Dining Hall of Fame. 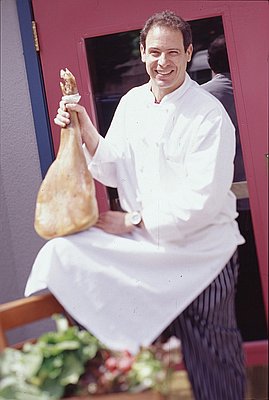