Leslie "Les" AuCoin broke a Republican monopoly on Oregon’s First Congressional District in 1974 when he became the first Democrat since statehood to win the seat. AuCoin served nine terms in the U.S. House (1975-1993). He was eighty-fourth in seniority, dean of the Oregon delegation, a whip-at-large, and member of the House Appropriations Committee.

AuCoin was born in Portland on October 21, 1942. His father abandoned the family when Les was four years old, and AuCoin’s mother moved with him and his younger brother to Redmond, where she supported the family as a waitress. At Redmond High School, AuCoin, an all-state basketball player, worked on the school newspaper, his introduction to politics and journalism. In 1960, he was the first male in his extended family to graduate from high school. He attended Pacific University and Portland State University before enlisting in the U.S. Army as a public information specialist. He returned to Oregon and worked for the Oregonian. Beginning in 1971, AuCoin was twice elected to the Oregon House of Representatives (1971-1974) and was selected majority leader in 1973 at the age of thirty-one.

In 1988, at the peak of his career, the Oregonian described AuCoin as “the most powerful congressman in Oregon and one of the most influential members from the Northwest.” He banned oil exploration off the Oregon-California coast, helped secure funds for the construction of light rail from Portland to Gresham and Hillsboro, and supported the reconstruction of Tillamook’s south jetty and Crater Lake Lodge. He helped create the U.S. Fish & Wildlife Forensics Laboratory in Ashland, the Seafood Consumer Research Center in Astoria, the Oregon Trail Center at Baker City, and the Lewis & Clark Visitors’ Center at Fort Clatsop.

As a member of the Defense Appropriations Subcommittee in the House of Representatives, AuCoin was a leading opponent of weaponizing space, arguing against President Ronald Reagan’s Strategic Defense Initiative and successfully helping to legislate a ban on testing anti-satellite weapons—the first time arms control was enacted by statute. He was an official observer to the Geneva Strategic Arms Reduction Talks (START).

In AuCoin’s second term, his amendment to partially normalize trade with China was the first such measure to reach the House floor (1978), presaging the establishment of full relations between the United States and China a year later. He led Oregon businessmen on the nation’s first state trade mission to China in 1979.

AuCoin traveled to Central America in the 1980s, documenting human rights abuses by U.S.-backed regimes in El Salvador and Guatemala and Contra irregular forces in Nicaragua. He was considered an expert in conventional arms and worked to develop an infantry anti-tank weapon that some military scholars believe “revolutionized” the ability of infantry to fight armor in land warfare. He also led House pro-choice supporters to oppose the ban on Medicaid funding of abortion services for poor women, and he supported passage of the Brady Handgun Control Act.

At home, AuCoin blocked mining in Oregon’s Three Sisters Wilderness and helped write the legislation for a 200-mile coastal zone to protect offshore fisheries. He worked to preserve Cascade Head on the Oregon Coast, helped stop the construction of Salt Caves Dam on the Klamath River, and fought chemical weapons incineration at the Umatilla Army Depot. He won the Distinguished Achievement Award from the Sierra Club for co-writing the Oregon Wilderness Act of 1984, which doubled wilderness in the state’s federal forests.

AuCoin and Senator Mark O. Hatfield, joined by Representative Norman D. Dicks and House Speaker Tom Foley from Washington, were criticized in 1990 for stepping in when a federal judge placed a ban on Forest Service and BLM timber sales in the region. The judge cited the agencies’ failure to produce a recovery plan for the endangered northern spotted owl. Faced with a wave of job losses in Oregon and Washington, legislators passed a measure to grant more time for the plan’s development by setting aside the injunction, providing a two-year sales program of five billion board feet, and banning logging in spotted owl habitat. The bill recognized, for the first time, old-growth forests and directed the agencies to minimize their fragmentation.

In 1992, AuCoin gave up his House seat to challenge incumbent Senator Robert Packwood. Packwood accused AuCoin of being an “environmental extremist” and, with a 3-to-1 spending advantage and timber industry support, Packwood was reelected, 52 to 48 percent.

AuCoin taught at Southern Oregon University and is an author and writer of several books, including a memoir, Catch and Release: An Oregon Life in Politics (Oregon State University, 2019). He is a former lecturer at Syracuse University’s National Security Studies Program, advisor to the Pentagon’s U.S. Joint Forces Command, and a director of the Federal Home Loan Bank of Seattle and Teton Heritage Builders, Inc., a construction firm based in Jackson Hole, Wyoming, and Bozeman, Montana. AuCoin and his wife Susan live in Portland. 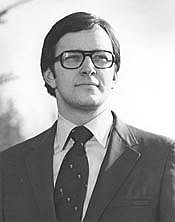 The National Historic Oregon Trail Interpretive Center is located five miles east of Baker City, along a stretch of ruts left by the wagons of Oregon Trail emigrants. The 509-acre site sits atop Flagstaff Hill (the namesake of the Flagstaff gold mine located beneath the hill) and overlooks the route …

Robert William "Bob" Packwood, a prominent United States Senator for twenty-six years, was born in Portland in 1932. He attended the California Institute of Technology for a few months before transferring to Willamette University, where he graduated in 1954 with a degree in political science.

During his undergraduate years, …

Who nailed a protected spotted owl to a park sign? Are ivory tusks from modern elephants or Ice Age mammoths? Are fish eggs sold as caviar actually from a sturgeon, or are they really from a paddlefish? Did a dried penis sold as an aphrodisiac come from a tiger or …

In 1940, the U.S. Army identified twenty thousand acres straddling the Umatilla and Morrow county line, eight miles west of Hermiston, as the site for a military munitions and supply depot. The Umatilla Army Ordnance Depot stored and supplied munitions to the army until the early 1990s. Between 1962 and 1969, …