The Klamath River originates on a plateau east of the Cascade Range in south-central Oregon. Among its sources are underground springs that emerge from fissures in volcanic rock; the Wood, Sycan, Sprague, and Williamson rivers; marshes and wetlands; and Upper Klamath Lake. The Klamath, a haven for many species of wildlife, is sixth in volume among the rivers of the West.

From its headwaters, the Klamath rushes 254 miles to the Pacific Ocean, traveling southwest through steep mountains in northwestern California until reaching its largest tributary, the Trinity River, at Weitchpec, California. From the confluence, the river changes course, flowing northwest toward the coast. The ten-and-a-half-million acres of the Klamath Basin include portions of six counties in California and Oregon. Most of the land is managed by federal agencies, especially the Forest Service and the Bureau of Reclamation.

People have lived in the Klamath Basin for millennia. It is likely that inhabitants witnessed the cataclysmic eruption of Mount Mazama. The Klamath River is unique in having Indian reservations at its headwaters, across its major tributary, and downriver to the mouth.

Salmon runs once united the Klamath Basin. The Klamath River tribes—the Yurok, Hupa, Shasta, and Karuk—harvested salmon by raising weirs across the river for ten-day periods that were coordinated with sacred Fixing the World ceremonies. This fishing method provided abundant salmon for all the tribes while leaving enough spawners in the river to produce the runs in future years. Even after the Gold Rush of 1849, when mining methods blocked and polluted the river, spring Chinook salmon spawned in the Upper Klamath Basin.

Water covered much of the area when the ancestors of the Klamath and Modoc tribes came to the Upper Basin. Over millennia, reeds and grasses that grew in large shallow lakes rotted and built up, forming peat-rich soils. Ancient lakes turned into marshlands. In the mid-nineteenth century, pioneers who traveled to the Upper Basin found that much of the land they wanted for farming and ranching was covered by water. Settlers built canals and drained marshes, and in 1906 the Bureau of Reclamation instituted the Klamath Project. A system of pumps, canals, dams, and reservoirs channeled the drainage of the Upper Klamath and Tule lake basins to clear land and provide water for irrigation. In 1918, construction began on Copco I, the first hydroelectric dam on the Klamath River.

Into the 1920s, the river supported a canning industry, whose record catch was 17,000 salmon in one day. With the building of Copco I, however, anadromous fish (migrating from the ocean up freshwater streams) lost access to hundreds of miles of spawning habitat. The subsequent decline of salmon runs caused the closure of the canneries and banned fishing by Indians in California.

In 1973, a U.S. Supreme Court case, Mattz v. Arnett, invalidated California's fishing ban by affirming tribal fishing rights and the status of the Yurok reservation as "Indian Country." When Indians resumed fishing openly with gillnets, members of the fishing industry who caught Klamath River salmon offshore blamed gillnetters for a decline in salmon runs. In 1978, the Interior Department imposed regulations on the Yurok fishery, arrested Indians who violated the rules, confiscated their fish and nets, and tried them in the Court of Indian Offenses. Later that year, Judge John Corbett released the gillnetters and ordered their property to be returned to them.

In the 1980s, federal legislation reestablished tribal governments at the mouth (Yurok) and at the headwaters (Klamath) of the Klamath River. By 1990, the tribal councils employed scientists to study the salmon in the river and the sucker species at the headwaters. This research contributed some of the data that became the basis for listing coho salmon and two sucker species under the Endangered Species Act.

In 2001, a water and wildlife crisis roiled the communities that drew from the waters of the Klamath River. Lawsuits invoking the Endangered Species Act forced the Bureau of Reclamation to curtail distribution of water for irrigation on federal Klamath Project lands, and farmers responded with protests and acts of civil disobedience. Vice President Dick Cheney intervened on their behalf, and the following year farmers once again received water for irrigation. That fall, with high temperatures and low oxygen levels in the river, tens of thousands of mature Chinook salmon died in the estuary and countless juveniles died. The loss of fish required severe restrictions on salmon fishing along the California and Oregon coasts in 2005 and 2006.

In 2006, the licenses for the four hydroelectric dams in the Klamath River expired. Responding to the collapse of the commercial salmon fishery, federal agencies made fish passage a condition for re-licensing the dams. By then, through a series of conflict resolution meetings and settlement talks, fishermen, farmers, and tribal leaders had reached a consensus on dam removal. In 2008, PacifiCorp, which owned the dams, signed an agreement in principle with the secretary of Interior and the governors of California and Oregon to remove its four dams on the river. 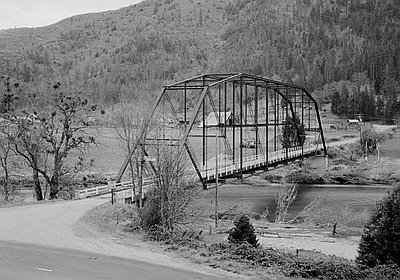 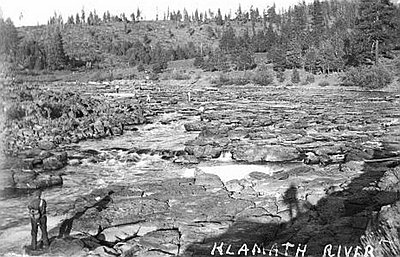 Before human engineering altered the upper Klamath Basin, water flowed from Upper Klamath Lake into Link River, a short stream that emptied into Lake Ewauna, the true headwaters of the Klamath River. During spring freshets, Lake Ewauna overflowed southward into Lower Klamath Lake, creating 94,000 acres of marshlands and one …