When trapper Peter Skene Ogden first saw the Upper Klamath River Basin in 1826, he observed that “the Country as far as the eye can reach [was] one continued Swamp and Lakes.” Following the end of the Modoc War in 1873, settlers began arriving in the region, eager to raise crops and livestock. However, the expanse of lakes, marshes, and wetlands (covering an area that stretches across what is today the Oregon-California state line), kept them from developing much of the land.

The National Reclamation Act, signed by President Theodore Roosevelt in 1902, made extensive agriculture in the Upper Klamath Basin possible by authorizing the reclamation of swamps and lakes to increase irrigable acreage. In 1906, the newly established Reclamation Service initiated the Klamath Project to drain lakes and wetlands for cultivation. The Klamath Project included a network of dams, canals, ditches, and other facilities to drain, move, and store Upper Basin water. Tule Lake became a sump one quarter of its former size. To carry out this large-scale experiment in hydrological engineering, California and Oregon had to cede their rights and title to Tule Lake, Lower Klamath Lake, and the surrounding land.

After World War I, Klamath Project plots were given to veterans who applied for them. The early homesteaders on Klamath Project lands had no electricity, running water, or telephones. They also lacked police and fire departments. Finding the Reclamation Service unresponsive to their needs and local officials unable to help them, the homesteaders founded the Tule Lake Community Club in 1928 and eventually created two schools and a sense of community.

Lower Klamath Lake evaporated after a berm carrying the railroad line between Klamath Falls, Oregon, and California cut it off from its source of water. As the lake shrank, grasshoppers, unchecked by insect-eating birds, infested the region. President Calvin Coolidge responded to the disaster by establishing the Tule Lake National Wildlife Refuge. In 1934, President Franklin Roosevelt's Fish and Wildlife Coordination Act required the renamed Bureau of Reclamation to consider the needs of wildlife when planning projects.

During World War II, the U.S. War Relocation Authority built 10 concentration camps for 18,000 Japanese Americans on project lands. After the war, the Bureau of Reclamation opened 86 Klamath Project farm units of 160 acres or less to homesteading. More than 2,000 veterans applied to take part in the lottery that determined who would live and work there. In addition to a record of military service, applicants had to have farming experience and to be in good health. The new homesteaders formed a potluck social club, and they received support from the surrounding community. By the end of the twentieth century, 1,400 farms were operating on the Klamath Project, cultivating up to 210,000 acres of wheat, barley, alfalfa, potatoes, onions, horseradish, sugar beets, and other crops.

After a winter of drought in 2001, a court order under the Endangered Species Act forced the Bureau of Reclamation to curtail irrigation of Klamath Project farms in order to meet the water needs of wild Coho salmon and two species of Upper Basin suckers. Protests and counter-protests soon followed. On May 7, local farmers and ranchers gathered in Klamath Falls to form a "Bucket Brigade" in protest of the water cutoff. In July, anti-federal militants joined farmers at the headgates to install and guard pumps and pipes that sent Klamath River water directly into the main irrigation canal. In August, Secretary of the Interior Gale Norton delivered 75,000 acre-feet of irrigation water from Upper Klamath Lake to Project fields. It was a political but not a practical victory, coming too late for most farmers to plant crops that would use the water.

In 2002, the Bureau of Reclamation restored the flow through the canals of the Klamath Project without regard to the needs of aquatic species. That fall, about 80,000 mature salmon died shortly after entering the Klamath River to spawn, and thousands of juvenile salmon, attempting to migrate to the ocean, died in the river as well. This ecological calamity led to severe curtailment of commercial salmon fishing along 700 miles of the West Coast in 2006 and 2007. Klamath Project farmers responded by supporting federal disaster relief for the commercial fishing industry.

In 2008, representatives of Upper Klamath Basin farming and ranching communities, along with government officials, tribal leaders, and environmental organizations, signed a stakeholders' agreement that called for the restoration of wild salmon habitat in the Klamath Basin. 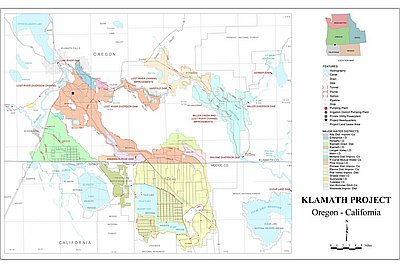 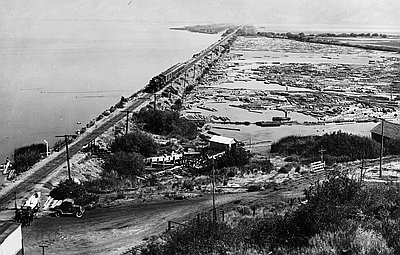 Most, Stephen. River of Renewal, Myth and History in the Klamath Basin. Portland: Oregon Historical Society, 2006.

Before human engineering altered the upper Klamath Basin, water flowed from Upper Klamath Lake into Link River, a short stream that emptied into Lake Ewauna, the true headwaters of the Klamath River. During spring freshets, Lake Ewauna overflowed southward into Lower Klamath Lake, creating 94,000 acres of marshlands and one …