In Oregon and much of the western United States, tule is the common name for two species of emergent plants that grow in shallow water of marshes, muddy shores, and lakes. These sedges (family Cyperaceae) are named hard-stemmed (Schoenoplectus acutus var. occidentalis) and soft-stemmed (S. tabernaemontani) bulrushes. Tule, a Spanish name, is based on tollin, of Nahurtl Native American lingustic stock, meaning a rush. Older botanical literature places these bulrushes in Scirpus, a closely related genus with various species names attached.

Tule, the basis of the name of the Klamath basin town of Tulelake in northern California, was named after the extensive shallow Tule Lake (not to be confused with ancient Lake Tulare in the Great Valley of California). Present-day Tule Lake is the remainder of Pluvial Lake Modoc, which filled the Klamath Basin during the Pleistocene. As climates changed, ancient Lake Modoc shrank, forming Upper and Lower Klamath Lakes and Tule Lake. Irrigation projects reduced the lakes to their present size.

Oregonians are probably most familiar with the extensive marshes on the margins and in the shallows of the great interior Klamath Lakes and Marsh and Malheur lakes. The tall (three- to six-foot), round, green stems are topped with clusters of brown, seed-producing spikelets of flowers. This contrasts with the cattail (Typha latifolia, family Typhaceae), another common emergent aquatic plant with flat leaves and characteristic flower clusters at the end of a leafless round shoot.

Tule bulrushes arise from an extensive rhizome system that forms vegetative mats with cattails and other graminoids (grasses and grass-like plants, including other sedges and rushes). These communities have great ecological value as food, cover, and habitat for the animals that live in and among them. Tules are a staple food for muskrats and other small mammals, songbirds, and waterfowl. They provide nesting cover or materials for many of Oregon's water birds, including herons, cranes, egrets, grebes, coots, ducks, tricolored and yellow-headed blackbirds, and marsh wrens.

Tule marshes also are important in the biogeocycling of nutrients, water, and gases (CO2, O2). These communities act as biological sinks for pollutants and as nurseries for aquatic organisms that form the energy basis for the entire ecosystem. Tule marshes can act as a buffer against shoreline erosion, a function not lost on modern humans. Both species are used in restoration projects for erosion control and reestablishment of vegetation.

Native Americans used tule bulrushes as drugs, food, and fiber. Some groups used the stem pith to stop bleeding, others chewed roots to prevent thirst, and some used stem ashes to stop a baby's bleeding navel. Native people boiled tules, made a syrup from them, or ate them peeled and raw. Some groups dried the "roots" and used the flour to make bread.

Fiber was the most important use. Collected stems were fashioned into baskets, mats, bedding, hats, and bags. The Northern Paiutes used tules in baskets, to build houses, to construct sandal and make clothing, and to make mats, rugs, and bedding materials. Simple piles of dried tules were used for seating. Some tribes use stems to make boats. 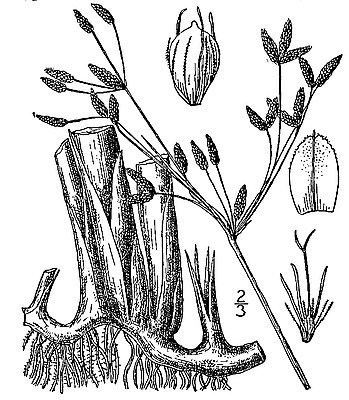