Before human engineering altered the upper Klamath Basin, water flowed from Upper Klamath Lake into Link River, a short stream that emptied into Lake Ewauna, the true headwaters of the Klamath River. During spring freshets, Lake Ewauna overflowed southward into Lower Klamath Lake, creating 94,000 acres of marshlands and one of the most prolific waterfowl breeding environments in North America. Early twentieth-century naturalist and photographer William L. Finley described Lower Klamath’s tule marshes and club-rushes as “the most extensive breeding ground in the West for all kinds of water birds,” including hundreds of fish-eating ospreys.

Fur trappers who began passing through the upper basin in the 1820s reported that the Klamath and Modoc harvested great numbers of sucker fish from the upper basin and gathered the eggs of swans and other water birds in the marshlands. In midsummer, families gathered lily seeds (wokas) that ripened in the marshes and collected material for making baskets. With the arrival of increasing numbers of whites in the 1870s, those seasonal rounds were disrupted, as farmers began grazing cattle and constructing irrigation ditches in the upper basin to raise crops on the arid but rich soils. The transformation of Lower Klamath accelerated when Congress passed the National Reclamation Act in 1902. Within three years, the new Reclamation Service authorized the Klamath Project, which straddled the Oregon-California state line.

The Klamath enterprise involved an elaborate scheme of dams, dikes, canals, and drainage ditches that eventually remade the landscape south and east of Klamath Falls. The newly constructed engineering design eliminated vast areas of marshland, including Lower Klamath Lake and Tule Lake to the southeast. The reclamation plan involved building a dike (using part of the Southern Pacific Railroad bed) to block the spring overflow from Lake Ewauna into Lower Klamath Lake.

The dewatering of Lower Klamath proceeded when the headgates through the railway embankment were shuttered in 1917. “Some 85,000 acres were dried up,” William Kittredge writes, and “by 1922 all that remained was a 365-acre pond.” To facilitate the conversion of wetlands for agricultural purposes, President Woodrow Wilson reduced the 80,000-acre Lower Klamath Lake National Wildlife Refuge, established by Theodore Roosevelt in 1908, to 53,600 acres in 1915.

The drained bed of Lower Klamath Lake turned into a dusty waste of dried peat that burned annually into the 1930s. The Lower Klamath marshlands, however, gained a semblance of restoration, and waterbirds began to return in 1941 when engineers built a 6,000-foot tunnel from the Tule Lake Basin to deliver excess irrigation water to the refuge. Following World War II, farmers learned to leach the alkali through deep drains and began to grow profitable crops in Lower Klamath.

The expansion of the Klamath Reclamation Project at the turn of the twenty-first century forced new water allocations when excessive withdrawals ran into conflict with the Endangered Species Act and the prior appropriation rights of the Klamath tribes. The consequences were continued conflict and the deaths of thousands of salmonids in the lower basin in 2002.

In the twenty-first century, low mountain snowpacks and strictures on drawing water from the Klamath River to protect threatened species continued to affect the once extensive landscape of Lower Klamath Lake. These developments brought an accommodation between the sovereign Klamath tribes and irrigators on allocating water to meet the requirements of the Endangered Species Act and the National Environmental Protection Act. A still pending piece of this complex puzzle is the agreement of Pacific Power Corporation (PacifiCorp) to remove its four small hydroelectric dams on the Klamath River, opening the upper river to anadromous fishes. 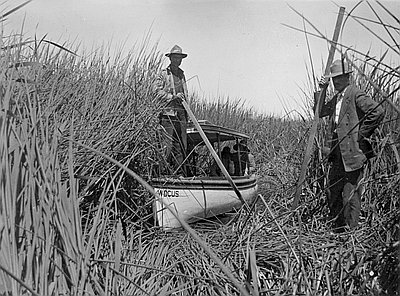 Klamath Lake's nutrient-rich waters support an array of aquatic and terrestrial organisms, ranging from bacteria and algae to fish and other vertebrates, including birds. The many invertebrates include the Chironomidae, an insect family of nonbiting midges, in the fly Order Diptera. In spring and early summer enormous numbers of adult …