Located in downtown Portland, Portland State University is Oregon’s urban research university. One of the two largest universities in the state, it is also the most ethnically diverse. From its beginnings as a temporary extension center after World War II, Portland State has become a metropolitan university that offers more than 120 graduate degree programs and a nationally recognized model of innovative undergraduate education to nearly 30,000 students from all 50 states and 84 countries.

The Vanport Extension Center opened in 1946 as a temporary educational institution of the Oregon State System of Higher Education, offering the first two years of college to 1,400 World War II veterans. Initially located in the City of Vanport, north of Portland, the center was so popular that in 1952, under Director Stephen Epler, it became a permanent, two-year institution with a new home in the old Lincoln High School on Portland’s South Park Blocks. On February 6, 1952, John Francis Cramer, dean of the General Extension Division and future Portland State president, informed Epler that the OSSHE had authorized a new name, the Portland State Extension Center.

Epler and his supporters began working on expanding the center into a four-year, degree-granting institution. In April 1953, the Oregon legislature approved HB 713, which allowed the center to offer four-year programs but withheld the authority to grant degrees. The school finally became a degree-granting institution on February 14, 1955, and was renamed Portland State College. The legislature established its boundaries as Market Street to the north, Hall to the south, Broadway to the east, and Park to the west. It envisioned Portland State as a “downtown city college…not of the campus type,” precluding the availability of student housing. By 1961, the student body had swelled to over 4,500 students, and the campus included two new classroom buildings, a library, a student union center, and another five pre-existing buildings repurposed as classrooms and offices.

In the fall of 1962, under the leadership of President Branford Millar (1959-1968), social work became the first master’s-level graduate degree offered at the college. A graduate program in education was authorized in 1958 but remained unfunded until its first class in September 1963. An additional eight master’s degrees in liberal arts and sciences were available in 1965 to the college’s 8,700 students. Portland State students made national headlines in 1965 after its College Bowl quiz show team went undefeated and broke scoring records against more prominent institutions.

In 1964, the Portland Development Commission designated nearly all of the property south along the Stadium Freeway (I-405), west to Southwest 13th Avenue, and east to Southwest 6th Avenue as an Urban Renewal zone available for Portland State development. Following federal Housing and Urban Development approval in 1965, the college began acquiring land and clearing nonacademic structures within its new boundaries.

Portland State’s first doctoral programs launched in 1968. Due to a longstanding OSSHE policy of not duplicating doctoral degrees among the state’s public universities, Portland State’s degrees focused on interdisciplinary education. Inaugural doctoral programs in urban planning and environmental sciences began 1969-1970, with a program in systems science following the next year. On February 14, 1969, the college was renamed Portland State University. By then, the university had acquired 40.4 acres within the 1965 boundaries but lacked funding for new construction. Taking advantage of this, Portland Student Services (now College Housing Northwest) acquired the use of nine vacated apartment buildings, bringing student housing to campus. As academic programming expanded so did the campus infrastructure, and between 1966-1972 original construction projects added a physical education building, two science buildings, a new library, two classroom building additions, a facilities and services building, and a daycare center. In 1972, a project was begun in the South Park Blocks that permanently closed the area near the university to vehicle traffic.

Following the shooting of students protesting the Vietnam War by the Ohio National Guard at Kent State University on May 4, 1970, a group of students, faculty, and members of the community staged a protest on the Portland State campus. As tensions mounted, President Gregory Wolfe (1968-1974) canceled classes on May 7-8, but he kept the university open to ensure dialogue between supporters and opponents of the protest. Nevertheless, on May 11 police stormed the occupiers’ camp in the Park Blocks, resulting in what is known as the Park Blocks Riot. Thirty-one protesters and four police officers were hospitalized.

During President Joseph Blumel’s years as president (1974-1986), higher education in Oregon faced repeated cuts in state funding, resulting in budget cuts, retrenchment of faculty, dissolution of some departments, and a 60 percent increase in tuition rates at Portland State University. Despite these setbacks, Blumel pushed Portland State toward closer collaboration with the City of Portland and Multnomah County and emphasized its role as an urban university. During this time, women played key administrative roles at the university for the first time, including the promotion of Orcilia Forbes to vice president for Student Affairs in 1978 and Margaret Dobson to vice president of Academic Affairs in 1986. Blumel’s tenure also saw the faculty’s first collective bargaining agreement in 1978 and the formation of the School of Urban and Public Affairs, the College of Engineering, the School of Performing Arts, and the unification of the Colleges of Science and Social Science into the College of Liberal Arts and Sciences. As Blumel left office in 1986, enrollment reached 14,700.

In 2005, as enrollment reached 25,000, Portland State issued its Declaration of Support for Sustainability and began increasing its research, educational, and operational practices to focus on sustainability. Between 2004 and 2016, the university had achieved LEED-certification for eight structures, promised to ensure all new construction efforts were at minimum LEED Gold, and received a $25 million challenge grant from the Miller Foundation to advance the goal of becoming a regional and national leader in sustainability.

In 2013, PSU enrolled its then largest cohort—29,524—students, graduated more the 6,000 students, and had an economic impact of $1.44 billion. As of 2015, the campus consisted of 49 acres and 54 structures, and the university offers 86 master’s degrees, 20 doctoral programs, and more than 40 graduate certificates in business administration, education, engineering, mathematics, science, social work, and urban studies. The LEED-Platinum Collaborative Life Sciences Building, a project of Portland State with Oregon State University and Oregon Health and Science University, opened to students on OHSU’s South Waterfront campus in 2014.

Dodds, Gordon B. The College That Would not Die. Portland: Oregon Historical Society Press and Portland State University, 2000. 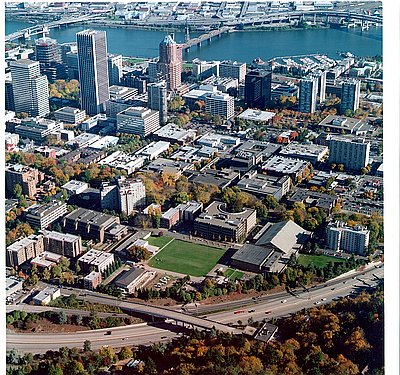 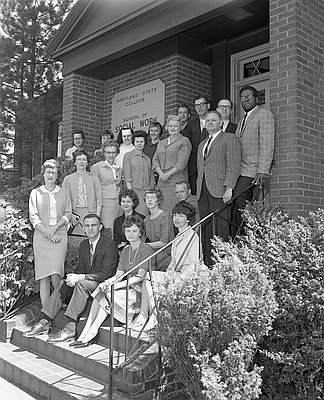 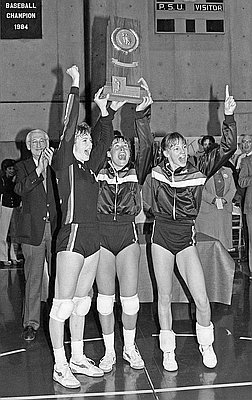 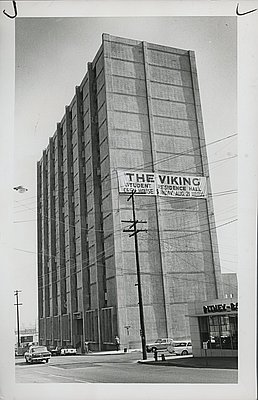 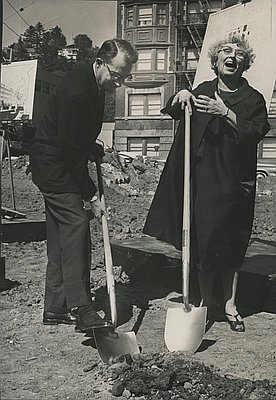 Film educator Andries Deinum transformed Portland’s cultural and intellectual landscape through his creative use of film and television in education and his pioneering development of urban studies. His Center for the Moving Image (CMI) at Portland State University (PSU), established in 1969, laid the groundwork for the Northwest Film Center …

A pianist, vocalist, composer, and educator, Darrell Grant arrived in Portland in 1997 with a national reputation. His contributions to the area jazz scene quickly elevated him to prominence based not only on his high level of musicianship but also on the attention and legitimacy he brought to jazz education …

When he was eight years old, Jeffrey Allen Lahti told his mother, "I want to pitch to Johnny Bench." Eighteen years later, his dream came true. Lahti pitched for the St. Louis Cardinals from 1982 to 1987, playing in three World Series games with two future Hall of Famers, Ozzie …

In the spring of 1974, Portland State University (PSU) inaugurated its fifth president, Joseph Carolton Blumel. The school had just turned twenty-eight years old, having been established in 1946 as an extension center that reported directly to the Oregon State Board of Higher Education. As a university, it was only …

Kwan Hsu arrived in Portland in 1964, a newly minted professor tasked not just with teaching at Portland State College (now Portland State University) but also with creating a new biophysics program in the Physics Department. When the United States normalized relations with China, Hsu’s connections on both sides of …

Neil Lomax was the unlikeliest football superstar, a decent passer on a running high school team. By mid-winter of his senior year, 1976, he had the same number of college athletic scholarship offers as the studious kid who sat next to him in math class: zero. Lomax was going to …

“The Oregon Literature Series is a national model,” wrote John Frohnmayer, chair of the National Endowment for the Arts. A project of the Oregon Council of Teachers of English (OCTE), the six books that make up the series, published by Oregon State University Press in 1993-1994 and in print ever …

In 1955, a Mayor’s Advisory Committee identified the blocks at the southeast end of downtown Portland—bounded by Market, Front, Arthur, and Fourth—as suitable for a land clearance and redevelopment project. Civic leaders wanted to use new federal legislation that had expanded the Housing Act of 1949 to include what soon …

Stephen E. Epler, the founder of the Vanport Extension Center—the beginning of today's Portland State University—was born in Brooklyn, Iowa, in 1909, the son of a Disciples of Christ pastor.

Epler's life reflected the Disciples' ecumenism and tolerance. A graduate of Cotner College in Lincoln, Nebraska, Epler did not smoke, drink, …

A nationally recognized and respected educator, Willard B. Spalding held two key positions in Oregon during critical times: superintendent of Portland schools at the end of World War II and administrator at the state’s newest institution of higher education, Portland State University.