While America's premier landscape architect, Frederick Law Olmsted, traveled the country in the mid-nineteenth century, encouraging mayors and town councils to add parks to their growing cities, early Portlanders were already setting aside land for parks. In 1852, a year after incorporation, Portland accepted a dedication of a row of twenty-four narrow blocks west of town from developer Daniel Lownsdale. Lownsdale, whose native Louisville had a similar row of "park" blocks, may have intended the blocks to serve as both a promenade and a firebreak between his real estate investment and the wooded hills above the new town.

After the death of the Lownsdales—Daniel and his wife Nancy in 1862—Portland's claim to the twenty-four blocks gave rise to a tortuous, two-decades-long legal fight between the Lownsdale heirs and the city. The city's title to the blocks was subsequently held insufficient, because Nancy Lownsdale had not signed any documents transferring ownership. Six of the central park blocks were lost to development in 1873, because the city council was unwilling to purchase them from the Lownsdale children. Two years earlier, the city had purchased the land that would become Washington Park and was not disposed to put up more money—which it likely didn't have anyway—to purchase the blocks.

By the 1870s, the South Park Blocks had become a prestigious residential district lined with Italianate mansions and churches. Through the end of the nineteenth century, the Park Blocks developed as a "promenade ground," complete with Dutch elms planted in rows and even, briefly, a racetrack.

The blocks north of Burnside Street adjoined an early Portland slum and never developed like the blocks to the south. Nevertheless, by 1906, Portland had joined other cities in embracing the "Playground Movement" and the recreational enthusiasm for park planning. Despite the mud—or perhaps because of it—children by the hundreds swarmed into the two North Park Blocks in December 1906 to inaugurate Portland's first playground.  Swings; a climbing rope; sandboxes and seesaws; horizontal, parallel, and vaulting bars; and a great slide gave outlet to young energy. Boys and girls each had their own area, and it was soon deemed necessary to build a fence around the boys' playground to keep out the men who were setting up boxing matches, gambling, and having a generally "pernicious influence."

In 1908, Parks Superintendent Emanuel Mische put his groundsmen to work transforming the South Park Blocks into a showplace for shrubs and flowerbeds, planting colorful ornamentals and roses and improving the walkways and benches. Such formality and color, he deemed, were appropriate to a park that edged the city's downtown core. Heroic statues of Theodore Roosevelt and Abraham Lincoln and the elegant, diminutive Rebecca at the Well were donated to the city to add art and history to the Park Blocks.

A spine of great and growing institutions, public art and plazas, diverse architecture, and open space, the Park Blocks support, inform, and energize the culture of the city. They are among the elemental Portland spaces. 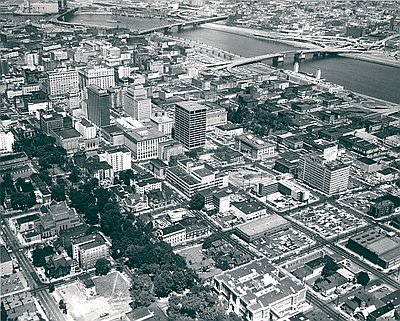 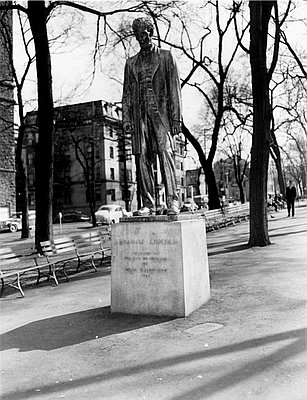 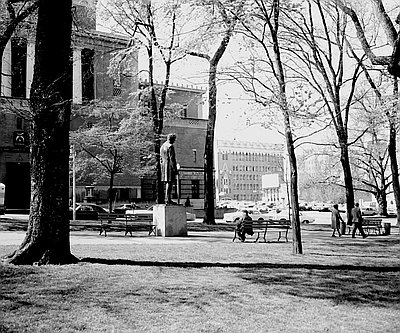 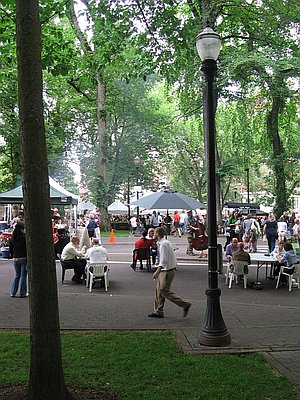 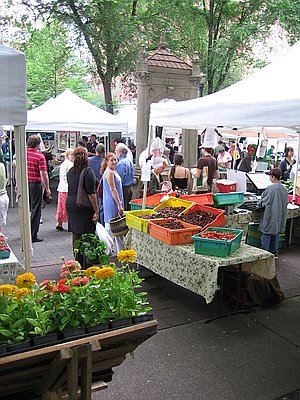 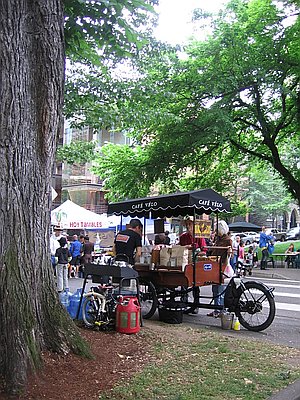