Albert Conrad "Al" Ullman, the U.S. representative from Oregon’s Second Congressional District from 1957 to 1980, was one of the state’s most effective elected officials in the post-World War II era. Initially a New Dealer in the mold of President Franklin Roosevelt, he gained a reputation as a socially liberal but fiscally conservative Democrat in a constituency made up largely of conservative eastern and central Oregonians. As a low-profile politician, Ullman was often overshadowed by the headline-grabbing activities and pronouncements of fellow politicians like Wayne Morse, Mark Hatfield, and Tom McCall.

Born on March 9, 1914, in Great Falls, Montana, Ullman earned a bachelor’s degree from Whitman College in 1935 and obtained a master’s degree in public law from Columbia University in 1939. During World War II, he served in the Pacific as a communications officer and was later a captain in the U.S. Naval Reserve. After the war, he settled in Baker (now Baker City) and worked as a builder and real estate developer.

Ullman narrowly lost his first bid for the Second Congressional District seat to Sam Coon in 1954, but he came back in 1956 and defeated Coon, largely because of his opposition to private hydroelectric development in Hells Canyon. He won reelection eleven times, often by overwhelming margins, in a district that at one time encompassed two-thirds of Oregon, an area the size of Tennessee and South Carolina combined. A December 1961 car accident in which Ullman lost much of his left leg threatened to slow him down, but he was fitted for a prosthetic limb and convinced skeptics that he was still up to the job.

Representative Ullman initially served on the House Interior and Insular Affairs Committee, advocating for public works projects and dams for Oregon farmers’ power and irrigation needs. Once he moved to the House Ways & Means Committee, where he became chair by the mid-1970s, Ullman oversaw federal spending on Social Security, health, and welfare issues and legislation on tax and trade matters. He waged a long and unsuccessful battle to trim the federal deficit, but succeeded in establishing the first congressional budget committees by steering the Congressional Budget Act to passage in 1974.

Closer to home, Ullman helped pass a bill in 1972 that restored the McQuinn Strip—61,000 square acres of disputed National Forest land—to the Confederated Tribes of Warm Springs. Also that year, he proposed legislation that added the Minam River Canyon to the Eagle Gap Wilderness in the Wallowa National Forest, helped restore tribal recognition to Burns-Paiute, and obtained $750,000 in federal funds for the Chemawa Indian School. In 1975, he pushed a preservation bill for Hells Canyon through Congress that placed 68 miles of the Snake River under federal protection and set aside 662,000 square acres for recreational use. In 1980, he helped pass the Pacific Northwest Power Planning and Conservation Act, created to help balance regional energy and environmental needs.

Ullman was not seriously challenged in his reelection bids until 1980, when he narrowly lost to Denny Smith, the son of Oregon Governor Elmo Smith. It was a bad year for Democrats, as Ronald Reagan won the Oregon primary on his way to victory over Jimmy Carter in the presidential election and Bob Packwood trounced Ted Kulongoski in the U.S. Senate race. In this context, Smith, many constituents, and the media criticized Ullman for infrequently visiting his district, as well as for supporting an unpopular value-added tax (VAT) to help pay for the Social Security deficit. Ullman eventually withdrew his support for VAT and returned home to campaign, but the perception that he had neglected his district took a toll with voters. The election was close, and Ullman lost to Smith by 3,765 votes of 290,748 cast. Anti-nuclear activist Lloyd Marbet ran to Ullman’s political left and got 10,787 votes.

After his defeat, Ullman largely stayed out of the public eye, establishing Ullman Consultants with his wife Audrey in the Washington, D.C., area. He was diagnosed with prostate cancer in 1975 and died on October 12, 1986. Ullman was buried in Falls Church, Virginia. 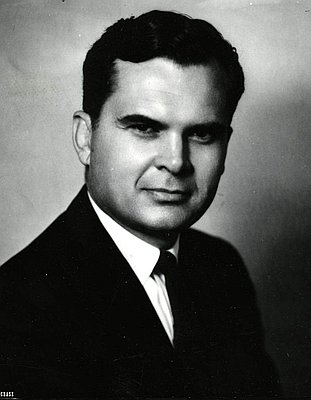 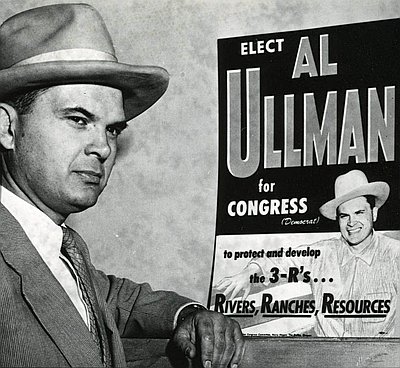 McDonough, Sandra. “Ullman’s campaign machine out of tune for uphill race.” The Oregonian, November 9, 1980, B7.

When he was elected to the United States Senate in 1954, Richard Neuberger had been at the center of journalistic excellence in the Pacific Northwest for two decades. At the age of twenty, he had gained national renown for “The New Germany,” published in The Nation in October 1933, one …