In 1968, voters in Eugene overwhelmingly approved a bond issue to finance the a nuclear project proposed by the Eugene Water and Electric Board. Opponents of the project soon coalesced in the Eugene Future Power Committee (EFPC), which placed an initiative on the ballot in May 1970 to impose a moratorium on the utility's participation in nuclear power. Their slogan, "We can wait. We should wait," reflected the moderate political stance of the EFPC. It was the first time in the nation that voters stymied nuclear construction plans.

Oregonians' response to nuclear power was affected by the region's history of conflict between public and private power, and the populist suspicion of private utilities gave an economic dimension to anti-nuclear protest. The state's only operating reactor, Portland General Electric's (PGE's) Trojan Nuclear Plant, became a protest target in part because it signified to many the irresponsibility of corporate power.

The first major direct action protest at Trojan, which opened in 1975, occurred in August 1977. The protest was linked to national protests that occurred at the thirty-second anniversary of the bombings of Hiroshima and Nagasaki. A second round of protests took place that November. Scores of demonstrators were arrested in each protest, and in December 1977 a jury found ninety-six protesters not guilty of criminal trespass.

The Trojan Decommissioning Alliance, which organized the protests, staged another occupation of the Trojan site in August 1978, leading to about 280 arrests. By the end of the 1970s, however, the movement was shifting from direct action to electoral strategies. Nuclear energy's economic woes, along with anxieties stemming from the 1979 accident at Three Mile Island, stalled new construction nationally. In Oregon, an initiative passed in 1980 required voter approval for future nuclear projects in the state. Plans for two nuclear plants at Pebble Springs, in eastern Oregon, fell victim in 1982 to cost escalation, declining demand, and the prospect of losing a popular vote.

In the 1980s and early 1990s, Portland activist Lloyd Marbet and his group, Forelaws on Board, became Trojan's leading opponents. In 1986, 1990, and 1992, voters rejected ballot measures that would have closed the plant. Meanwhile, Trojan faced recurrent operating difficulties. In August 1992, the utility's directors voted to close Trojan by 1996, almost two decades before its expected retirement date. Days after it successfully turned back the third initiative, at a cost of about $4.5 million, PGE announced that cracks in steam-generator tubing would be costly and difficult to repair. In January 1993, the company decided to close the plant permanently and decommission it. On May 21, 2006, PGE demolished the most visible structure at Trojan, the 499-foot-high concrete cooling tower.

The tubing problems were the proximate cause of Trojan's shutdown. The plant's dismal operating record had made it a burden to its owners. Yet, activists claiming success for their efforts were also correct. Direct action and initiatives had failed in the short run, but they showed that many Oregonians had severe doubts about nuclear power. Those doubts merged with economic conditions to make continued operation at Oregon's only nuclear power plant unsustainable. 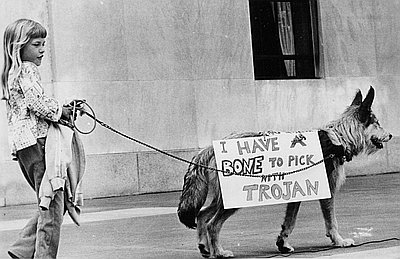 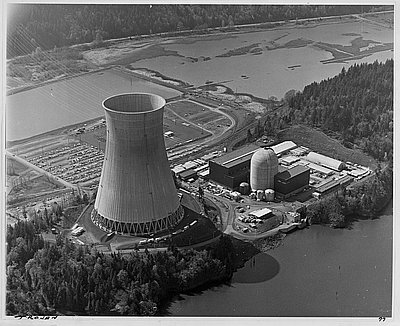 The Trojan Nuclear Power Plant, located in Columbia County about twelve miles north of St. Helens, began generating power in March 1976. It shut down in January 1993. The saga of Oregon’s only nuclear-generating plant, however, played out over a period longer than the seventeen years it was in operation.  …