In the late nineteenth century, Portland's City Park (soon to be named Washington Park) offered visitors grand views of the "emerald compass," the mountains and volcanic buttes that encircled the city. The park provided a pleasure ground in the spirit of nineteenth-century cemeteries and parks—a sense of closeness to nature, removed from the clang and cluster of the city below.

Yet, even with this large park, the downtown Park Blocks, a handful of neighborhood parks, and the surrounding fields and forests, Portland's new Park Board believed something was missing: a plan on which to build a park system to meet the needs of a growing, twentieth-century city.

While the new board debated how to proceed, in 1901 the city's leading merchants, manufacturers, and bankers began making even bigger plans for a world's fair to celebrate the 1905 centennial of the Lewis and Clark Expedition. Nationally, City Beautiful was becoming a buzzword as America's planners, architects, and designers worked to establish a design ethic to transform American cities—darkened by decades of industrialization and poor, planning—into beautiful places.

John Charles Olmsted arrived at Portland's Union Station in early April 1903 and immediately went to work on the design for the fairgrounds. He then turned his attention to analyzing Portland's terrain, park inventory, real estate prospects for future parkland, and park personnel.

Driving his horse-drawn carriage "Jupiter," Park Board member Lester Leander Hawkins took the distinguished planner on tours around the city, while Olmsted took copious notes on five-inch index cards. He spent his evenings at the Portland Hotel writing up his notes in longhand, which were then typed by hotel stenographers. Predicting a recurring problem that would haunt Portland planning, Olmsted wrote his wife: "I have enjoyed my park reconnaissance very much as the landscape is fine and the possibilities for parks, as far as land is concerned, are excellent. But I fear the money will be deficient."

Strategic, visionary planning was at the heart of the 1904 Olmsted report to the city council. He wanted Portlanders to look far into the future—fifty years or more—especially when it came to purchasing land. Typical of Olmsted plans, his report was comprehensive, including advice on land acquisition and the qualities of good parks and park systems, parkways and boulevards, park governance, and administration.

Olmsted's outline of a "comprehensive system of parks and parkways for Portland" began with a large forest reservation between Riverview Cemetery and the southern suburb of Lake Oswego. His plan was partially achieved with present-day Tryon Creek State Park. An informal "picturesque" parkway would run from Riverview Cemetery along the eastern foot of the West Hills, connecting the downtown park squares, Washington Park, and passing by Macleay Park to connect to what is now Forest Park. Terwilliger Boulevard is part of this proposed city-length parkway as are Skyline Boulevard above and Leif Erikson Drive through Forest Park.

On the Willamette River, at the south end of town, Olmsted suggested that the city acquire Ross Island as a park. East of the river, he proposed a river-bluff parkway from Sellwood to the current site of the Oregon Museum of Science and Industry. McLoughlin Boulevard is a partial realization of Olmsted's planned road.

Another parkway would run north, from approximately Northeast Broadway along the river bluff above the railyards and Mocks Bottom to the University of Portland. A great meadow park in the Columbia Sloughs, just west of where Portland International Airport now sits, would preserve the bottomland scenery near the river. Olmsted then proposed running a series of boulevards (distinguished from parkways by their more formal improvements) from Sellwood Park to Ladds Addition, out to Mount Tabor Park, and then north, up to Columbia Slough Park, and back over to the proposed parkway on the bluff above Swan Island, which he also recommended for inclusion in the park system.

Like Boston's Emerald Necklace, designed by his stepfather Frederick Law Olmsted, John Olmsted's proposed park system—elongated and connected—would provide a greenbelt nearly across and around the city. He left it to the people of Portland—and their Park Board, staff, and city council—to make the plan real.

With the city's leadership focused on the Lewis and Clark Exposition in 1905 and its prospects for post-fair economic growth, with L.L. Hawkins's death and T.L. Eliot's resignation from the Park Board, and with Portlanders' resistance to providing public funding for land acquisition, there was little way and less will for Olmsted's plan to proceed.

While parks commissioners Hawkins and Ion Lewis had expressed total support for the plan, Mayor George Williams represented the sober reality. He agreed about the desirability of a system of parks and boulevards but concluded that "we must cut our garment by our cloth and cannot afford such an outlay." Perhaps the greatest lost opportunity was the Lewis and Clark fairground itself. Olmsted wanted to see the area become a park, but even before he arrived it had been sold for future development and then leased back for the fair's temporary use. 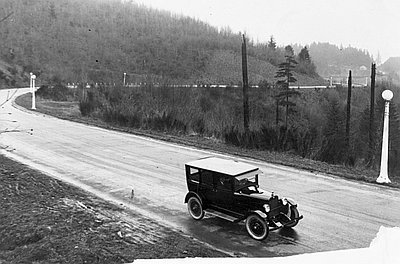 Portlanders have long valued Macleay Park, in Portland’s northwest hills, as a wild oasis close to the city’s core. The nearly 140-acre park has deep ravines shaded by large Douglas-fir and western red cedar trees. Macleay Park also contains the lower portion of Balch Creek, which has a small population …