Francis J. Murnane was a longshoreman, labor leader, writer, and preservationist. He was described in his obituary as the “cultural and historical conscience of Portland.” He was an advocate for leftist politics, fighting for the freedoms of immigration, speech, and association. He was also an advocate for historic preservation, and his campaigns saved many significant structures in Portland from demolition and abandonment.

Murnane was born in Boston, Massachusetts, on October 12, 1914. Raised in the Goose Hollow neighborhood of Portland, he attended Lincoln High School and Columbia University (now the University of Portland). As a child, he accompanied his father (who sharpened axes) into logging camps, where he was exposed to the traditions and ideals of the Industrial Workers of the World (IWW). Those experiences instilled in him a lifelong love of unions and a belief that organized labor could bring about a world in which work was rewarded with a living wage, dignity, equality, and social justice.

A devout Catholic, Murnane considered entering the priesthood in his early twenties but instead went to work at a plywood mill. In 1937, a conflict between the American Federation of Labor (AFL) and the Congress of Industrial Organizations (CIO) led to a nearly three-year lockout at the Plylock Plant in Portland. Murnane took on a leadership role, serving as president of the CIO-affiliated International Woodworkers of America Local 9-102. He filed a suit in 1938 on behalf of the locked-out workers, which resulted in the payment of over a million dollars to the strikers. As part of the Portland Industrial Union Council, he organized the Harry Bridges Defense Committee in 1939, which was devoted to helping prevent the deportation of Bridges, the Australia-born founder of the International Longshore and Warehouse Union (ILWU), because of his Leftist beliefs.

Murnane was drafted by the U.S. Army in 1941 and served as an engineer during World War II until he was discharged in 1944. By 1946, he was working as a longshoreman. He established the Julia Eaton Ruuttila Defense Committee in 1948 to raise funds for the journalist. Ruuttila had been arrested during a months-long labor action organized by the International Woodworkers of America. He also ran for the legislature as a candidate for the United States Progressive Party while defending union members during the McCarthy era.

During his twenty-two years of active membership in the ILWU, Murnane served on the executive board and as president of Local 8, and he testified before Congress in support of organized labor. Local 8 had a history of racial discrimination, an issue that Murnane dealt with by attempting to strike a balance between the anti-racist ideals he shared with the ILWU and the prejudice of longshoremen who made up a portion of Local 8’s membership. Under his leadership, Portland’s seaports operated for twenty years without a major work stoppage.

From 1949 to 1951, Murnane sought to expose the Portland Police Bureau’s “subversive activities” unit, known as the Red Squad. He compiled detailed records and testimony, documenting a campaign of surveillance, harassment, and the misuse of immigration laws. Murnane’s reports to Mayor Dorothy McCullough Lee were largely dismissed, but his thoroughness and publicity efforts contributed to the public recognition of the Red Squad and aided in its eventual censure.

A prolific and eloquent writer, Murnane advocated for education about labor history and was a prime mover behind Portland’s marches commemorating “Bloody Thursday,” the police murder of two strikers during the 1934 West Coast waterfront strikes. His love of historic preservation put him at odds with those who supported eliminating structures to make way for automobiles, and his efforts helped save some of Portland icons from destruction, including the Benson Bubblers, the Pittock Mansion, the sternwheeler Portland, Skidmore Fountain, and Portland Firefighters Park.

On April 10, 1968, four days after the assassination of Dr. Martin Luther King, Jr., Murnane went to Local 8 and called for a moment of silence, but was repeatedly interrupted by jeers and denunciations from some of its members. Minutes later, he suffered a fatal heart attack. His funeral was attended by five hundred mourners, including Oregon Senator Wayne Morse, Mayor Terry Schrunk, Harry Bridges, and many “old time union men.” The Port of Portland was shut down for twenty-four hours in his honor.

The Francis J. Murnane Memorial Wharf, the first monument in Oregon to a labor leader, was established in 1979, just south of the Burnside Bridge and close to Skidmore Fountain. As the power of the ILWU waned and Murnane’s contemporaries died or retired, the dock was forgotten, the bronze plaque was stolen, and the city began to refer to it as Ankeny Dock. In 2009, labor historian Michael Munk learned that the city was planning a cantilevered walkway for the site, and the memorial was refurbished and preserved. The walkway, however, made the wharf inaccessible. Though the power of organized labor has diminished, Murname is gaining new attention by the Local 8 for his work with the ILWU, his contributions to preserving Portland history, and his reputation as a “longshoreman with the soul of a poet.” 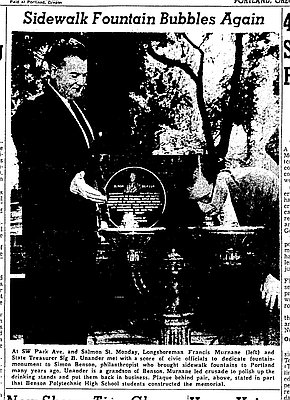 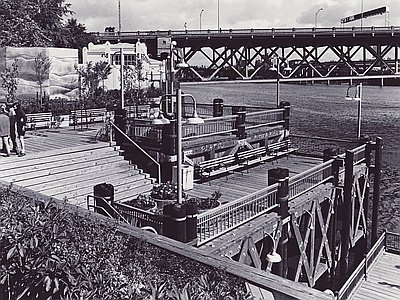 “Murnane was ‘A Dedicated, Steadfast Union Man.” The Dispatcher: Published by the International Longshoremen’s and Warehouse Union. 26.9 (April 26, 1968): 3.

Polishuk, Sandy. “‘They Can't Come in through the Front Door Because You Guys Won't Let Them’: An Oral History of the Struggle to Admit African Americans into ILWU Local 8.” Oregon Historical Quarterly 120.4 (2019): 546–563.

Julia Ruuttila was a labor and investigative journalist, a poet and fiction writer, and a union, peace, and justice activist who lived all but a few years of her life in Oregon.

Ruuttila was born Julia Evelyn Godman on April 26, 1907, in Eugene to John B. Godman and Ella …

As Woody Guthrie observed at the dawn of the McCarthy Era in 1947, "Portland is OK except for being 50 years behind Seattle in radical temper." While Oregon did its part to suppress the Left, there may have been fewer radicals in the state to suppress. That, of course, was …