As Woody Guthrie observed at the dawn of the McCarthy Era in 1947, "Portland is OK except for being 50 years behind Seattle in radical temper." While Oregon did its part to suppress the Left, there may have been fewer radicals in the state to suppress. That, of course, was no comfort for its Oregon victims.

From the late 1940s to the mid-1950s, McCarthyism—the hunt for Communists in the government and public life, a period most closely associated with Wisconsin Senator Joseph McCarthy—was a significant domestic objective of the Cold War era. The courts and the public and private agencies that implemented McCarthyism framed the Communist party(the CP USA), which was an important organizer of labor unions, as a dangerous conspiracy directed by the Soviet Union. The first target was the left wing of the labor movement, which had achieved some measure of influence during the New Deal and World War II.

One of the most significant events of that effort began in Portland. During the New Deal, millions of workers had organized into the Congress of Industrial Organizations (CIO), which included the Portland-based International Woodworkers of America (IWA) and the International Longshore and Warehouse Union (ILWU). The CIO convention held in Portland in 1948 reacted to the fear of Communists by beginning the process of expelling unions accused of being led by Communists in its ranks.

In subsequent years, McCarthyism in Oregon was used mainly to impose economic suffering on radicals and on former radicals who failed to make adequate apologies. For example, the Fred Meyer Company fired John MacKenzie, an assistant produce manager; Inland Motor Freight fired Herbert Simpson, a rate clerk; the Oregon Public Welfare Commission fired Julia Ruuttila, a medical division secretary; and Reed College fired Professor Stanley Moore and suspended Professor Lloyd Reynolds. Public employees, as well as those in many private companies, were required to sign loyalty oaths, swearing whether they were or had ever been Communists or members of other leftist organizations. Those who refused to sign or who answered "yes" were fired or were not hired.

In 1954, Oregon reached a low point with the visit to Portland of the House UnAmerican Activities Committee (HUAC). Fifty-three Oregonians were publicly identified as leftists by three HUAC informers, including Robert Canon, former dean of students at Reed College, and former Reed student Homer Owen. Almost half of those accused were associated with Reed College, but the list also included artist Michele Russo, cantor Michael Loring, labor leaders Harry Pilcher and Sam Markson, and Lincoln brigade vet Earl Payne. Most of those who defied HUAC lost their jobs, and four—all World War II vets who became known as the "Portland Four" (MacKenzie, Simpson, Don Wollam, and Thomas Moore)—were convicted of contempt of Congress. MacKenzie, Simpson, and Wollam were sentenced to prison; their convictions were reversed on appeal by the Supreme Court.

Oregon experienced a gradual and uneven recovery from its bout with McCarthyism. The state legislature repealed the loyalty oath in 1959, but many victims suffered years of unemployment and ostracism. In 1964, hearings of the Subversive Activities Control Board, on which former Portland Mayor Dorothy McCullough Lee sat until 1962, were greeted by vigorous protests in Portland. Not until 1997 did Reed College reluctantly invite Professor Moore back to its campus. 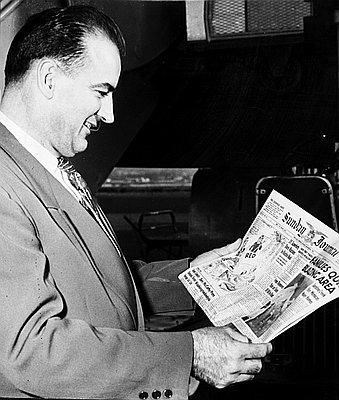 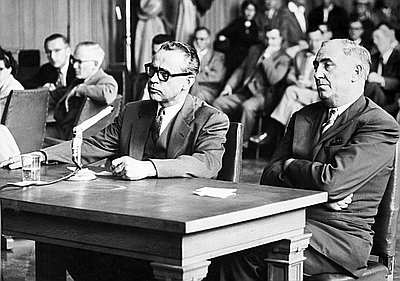 Munk, Michael. The Portland Red Guide: Sites and Stories of Our Radical Past. Portland: Ooligan Press, 2007.