Situated on 116 acres in southeast Portland, Reed College enrolls nearly 1,400 undergraduates each year from all over the world. Considered one of the most demanding colleges in the nation since its beginning in 1911, Reed’s academic rigor is intended to cultivate an ethos of learning for the sake of learning, shaped by critical thinking, creativity, and scholarly discipline. Graduates have become innovators and leaders in all walks of life, including in science and the arts, in medicine and global politics, and in education and the environment. Notable alumni include Northwest poets Gary Snyder, Philip Whalen, and Mary Barnard; Chef James Beard; Tektronix founder Howard Vollum; Apple founder Steve Jobs; and Wikipedia co-founder Larry Sanger. As of 2013, Reed had produced thirty-one Rhodes Scholars, the second-highest number of any American liberal arts college, as well as over fifty Fulbright Scholars and three MacArthur Fellows.

Reed’s program of study, leading to the degree of bachelor of arts, is designed to balance a broad exploration of human knowledge with in-depth study in a particular academic discipline. The curriculum is structured to include a yearlong humanities course, multi-discipline course requirements, a junior qualifying exam, and a senior thesis with an oral defense before a faculty committee. The college maintains a 10:1 student-to-faculty ratio to help students engage with their professors, and Reed limits class sizes in order to encourage faculty members to mentor and connect with students in individual discussions. To reinforce the focus on academics, intercollegiate sports programs and fraternal organizations have been rejected since the college’s founding.

The college’s history begins in the late 1880s, when the Rev. Thomas Lamb Eliot, a Portland civic leader and minister of the city’s Unitarian Church, suggested to two of his parishioners, Oregon steamboat pioneer Simeon Reed and his wife Amanda, that they use their financial resources to establish an institute of lectures, arts, and music, where “general enlightenment, intellectual, and moral culture” would be fundamental. The Reeds subsequently left the bulk of their estate to creating such an institute under Eliot's leadership for advancing the “intelligence, prosperity, and happiness of the inhabitants” of Portland. Reed opened its doors as Portland’s first nonsectarian college on September 18, 1911.

In the days leading up to America’s involvement in World War I, Reed’s founding president, William T. Foster (1910–1919), and his faculty engendered local controversy as outspoken pacifists. During the 1920s and 1930s, Reed adopted one of the nation’s first general education core curriculums and established itself as the Northwest’s most prominent liberal arts college, drawing primarily a regional student body. Following World War II, veterans enrolling on the G.I. Bill brought both an increase in the student body and a more national composition of students.

In 1954, the campus underwent severe upheaval when the House Un-American Activities Committee investigated three of Reed’s faculty members—Stanley Moore, Lloyd Reynolds, and Leonard Marsak—for alleged Communist activities, sparking a local controversy over academic freedom that reflected similar debates nationally. After the Cold War intensified with Russia’s launch of Sputnik in 1957, Reed repositioned itself as an important national asset, leveraging the college’s historically strong reputation in the sciences by modernizing the campus’s physical plant and strengthening its teaching resources.

Reed launched a Master of Arts in Liberal Studies program in 1966. In 1968, a research reactor was built, providing students and faculty with a neutron source to perform biology, chemistry, and physics research. It is the only research reactor in the world operated primarily by undergraduate students.

In the late 1960s, when students and faculty in many liberal arts colleges were raising questions about the limitations and relevance of a prescribed course of study,Reed was one of the few to maintain its core curriculum. In addition, Reed’s financial resources were challenged. President Paul Bragdon (1971–1988) was largely responsible for bringing Reed into fiscal balance and shoring up its endowment. In the 1980s, facilities were added to the campus, including a major library addition that would house the Douglas F. Cooley Memorial Art Gallery.

In the 1990s, the humanities program was enlarged to include the history of Chinese civilization. Under President Steven Koblik (1992–2001), the college saw the further growth of its endowment and facilities and the affirmation of Reed’s curriculum and qualitative focus on teaching the liberal arts.

In 2005, the Princeton Review declared Reed College to be the best academic experience for undergraduates in America. Just ten years before, Reed had captured national attention for refusing to participate in the country’s most popular college guide, U.S. News and World Report’s “best colleges” rankings, because of its questionable methodology, despite having been ranked as one of the top ten liberal arts colleges. The convictions that led to the rankings decision—anchored in the college’s pursuit of intellectual freedom, academic rigor, and egalitarian democracy—was controversial and confirmed the college’s longstanding dedication to being a model of independent leadership in higher education.

One of Reed’s most significant commitments to the region emerged in the first decade of the 21st century when it began efforts to restore the canyon that bisects the campus. Over a ten-year period, Reed spent $2 million restoring this critical part of Crystal Springs Creek. In concert with work by the City of Portland and others, Reed’s goals are to help reconnect one of the city’s remaining historical waterways to the Willamette River and contribute to the long-term survival of Oregon’s native fish populations.

As Reed began to look ahead to its second century, a unified performing arts center was identified as a priority. Part of the campus master plan for over fifty years, the center was built to provide new opportunities for creative expression and critical analysis. President Colin Diver (2002–2012) also focused his administration on increasing campus diversity, enlarging residential facilities, and creating a college community that enables students to be academically successful and socially responsible. In 2012, John R. Kroger was appointed Reed’s fifteenth president. Reed remains one of the Pacific Northwest’s premier liberal arts college. 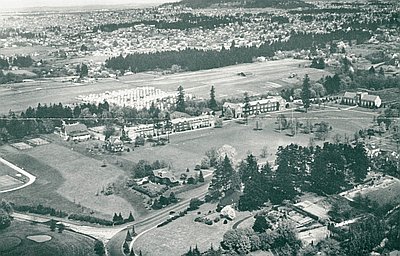 In 1866, the Ladies Sewing Circle, a small group of Portland women from the New England states, led by Mary Frazier, raised $2,000 for a church that reflected their belief in liberal Christianity. They bought land at Southwest 7th and Yamhill and built a structure in 1867. A young minister …

Many think of Gary Snyder, Pulitzer Prize-wining poet and essayist, as primarily a Beat writer or as a member of the San Francisco Renaissance. Certainly in his early career he was intimately associated with Jack Kerouac, Lawrence Ferlinghetti, Allen Ginsberg, and Kenneth Rexroth, but his writing was much more a …

Tektronix, one of Oregon's most prominent and innovative high-technology companies, was founded in 1946 and quickly grew into the world's leading manufacturer of specialized test and measurement instruments. Tektronix is widely credited with commercializing the first oscilloscope that incorporated the "triggered sweep circuit," which allowed users to pick up and …

Thomas Lamb Eliot was one of the most influential clergymen in the history of Oregon. He is an excellent example of the Social Gospel movement in the Pacific Northwest; as a result, he wielded significant influence on Portland civic and social life. Eliot is a good reminder that although the …