Henry Villard gained national significance as a journalist, advocate of abolition, and railroad financier. For Oregon, he is best remembered as the man who brought the first transcontinental railroad to the Northwest in 1883, connecting Oregon to the rest of the country. He sponsored several trend-setting buildings in Portland and elsewhere in the region and was instrumental in rescuing the fledgling University of Oregon in 1881.

Villard was born Ferdinand Heinrich Gustav Hilgard on April 10, 1835, in Speyer, Rhenish Bavaria, Germany; his father was a judge of the Bavarian Supreme Court. After several years of university study at Munich and Würzburg, and repeated chastisement from his father—he disagreed with his father’s rigid monarchist views—Heinrich secretly immigrated to the United States in 1853. He assumed the name of Henry Villard to avoid detection and his father's threat of putting him into forced military service.

Villard gradually moved westward, staying with family members who had already immigrated to America. He contributed to German-language newspapers and (after learning English) for New York newspapers as well, covering the Lincoln-Douglas debates in Illinois.In Colorado, he reported on the Pike’s Peak gold strikes and published a book on the Colorado region. He also was a reporter for the New York Tribune, reporting on the Civil War, and the Chicago Tribune. A strong supporter of abolition, he was a close friend of abolitionist William Lloyd Garrison; after the war, in 1866, he married Garrison's daughter, Helen Frances Garrison.

In 1873, while traveling in Europe to seek treatments for a respiratory ailment, Villard was consulted in Heidelberg by a man who had invested in, but had yet to see dividends from, several western American railroads, including Ben Holladay’s Oregon Central Railroad. In early 1874, Villard met with Holladay in New York City and then proceeded to Oregon to see for himself the extent and condition of Holladay's railroad.

Strongly impressed by the promise of the Oregon landscape, Willamette Valley farms, and the industriousness of Oregon's people, Villard discovered that Holladay's fraudulent practices had prevented the railroad from showing profits. Having investigated the business (now called the Oregon and California Railroad), Villard advised the German investors to buy a controlling interest in the O&C, as well as Holladay's other transportation businesses. Holladay was then removed from management.

Impressed by the wealth of natural resources in Oregon, Villard envisioned a railroad empire in the Pacific Northwest. He leveraged a buy-out of the Oregon Steam Navigation Company from Simeon Reed and his associates, and in 1879 reorganized the combined enterprises as the Oregon Railway & Navigation Company. By cutting ledges in the cliffs that lined the south bank of the Columbia River Gorge, Villard extended the railroad to the east.

Recognizing the value of connecting his Oregon railroads to the projected transcontinental Northern Pacific Railroad—which had already built a western section from the Columbia River to Tacoma, Washington, and had extended the main trunk line from Lake Superior and Minneapolis-St. Paul to central North Dakota—Villard proposed to the directors of the Northern Pacific that they connect their route to his expanding Oregon network. They refused, and he proceeded to engineer a stealthy buyout and takeover of the Northern Pacific.

Elected to the board and appointed as the new president of the Northern Pacific, Villard shifted the terminus of the trunk line from Tacoma to Portland. He then turned his attention to the most difficult section of the main line, from Bismarck, North Dakota, across the Rocky Mountains to Sandpoint, Idaho, connecting to the western section of the line. In 1883, the railroad was completed, with Portland the beneficiary of the transcontinental connection. Oregon products now could be shipped directly to the East, and goods, products, and passengers could travel to Portland without trans-shipment from San Francisco.

Villard created the Oregon Improvement Company to undertake coordinated development of the region’s natural resources, emerging with total control of the Northwest transportation network. Due to the extreme debt undertaken to finish the Northern Pacific, however, Villard was forced to relinquish the presidency in 1884, though he was again a board member from 1888 until 1893.

Though operating a virtual monopoly of water and rail transpiration in the Pacific Northwest, Villard never exploited his transportation system at the expense of Oregon's businesses. He enjoyed a good reputation in the state, particularly in the estimation of Judge Matthew Deady. He also held high expectations for improving the financial performance of Oregon and elevating the artistic quality of the state's architecture, which he saw as being roughly twenty years behind the East.

In 1882, Villard had a grand passenger terminal station designed for Portland by the rising architectural firm of McKim, Mead & White of New York. Intended to mark the terminus of the North Park Blocks, it was never built. Its design influenced the architecture of Union Station, which now stands at the northern end of Sixth Avenue.

To accommodate weary transcontinental passengers, Villard envisioned a large, elegant hotel, but local businessmen were reluctant to undertake the venture. In 1882, Villard directed the Northern Pacific to begin construction of the Portland Hotel, designed by McKim, Mead & White, on a site immediately west of the federal building (today’s Pioneer Courthouse). When Villard was forced to relinquish the presidency of the Northern Pacific, construction was stopped, and the raw foundations stood for several years until a syndicate of Portland business leaders paid for the work to resume.

Villard supported other Oregon interests as well. In mid 1881, through his friend Judge Matthew Deady, he learned that the University of Oregon in Eugene was deeply in debt. Villard prevented the institution’s closure by donating a substantial sum in railroad stock and cash, with specially designated funds for library books, chemical laboratory equipment, scholarships, and several faculty salaries. In March 1886, in recognition of Villard’s generosity, university officials named the school's new second building Villard Hall. 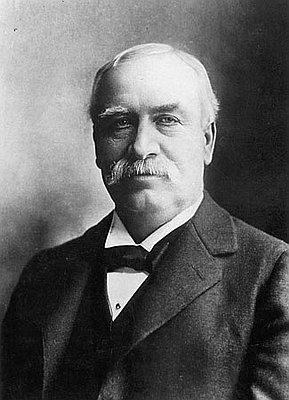 Villard, Henry. The Early History of Transportation in Oregon. Eugene: University of Oregon, 1944.