Sam Simpson was a singer of love songs to Oregon. In 1899, Judge John Burnett called him “the [Robert] Burns of Oregon…who could make the Muses smile or weep. What Edgar Allan Poe was to the beginning, Simpson was to the close of the century in America.” Most Oregon schoolchildren and many adults from the 1870s and into the 1920s could quote from his most famous poem, “Beautiful Willamette.”

Samuel Leonidas Simpson was born in Missouri on November 10, 1845, the second son of Benjamin and Nancy Cooper Simpson, who took him to Oregon as an infant over the Barlow Road. Ben Simpson was an entrepreneur and a successful early citizen of Oregon. He was a builder of military roads, a member of Oregon’s second territorial legislature (1850) and the Oregon House of Representatives, Indian agent at the Siletz Reservation (1862-1870), and surveyor general for Oregon Territory (1875). In 1856, the Simpson family moved to Grande Ronde, where Ben Simpson built a sawmill and bought the sutler’s store, a civilian establishment that sold provisions to the army at Fort Yamhill.

Although Sam Simpson grew up with only rudimentary schooling, he showed a strong interest in literature. He read the poems of Robert Burns in a volume his mother received in 1846 from Fort Vancouver’s chief factor John McLoughlin, and he received a copy of Lord Byron’s poems from Lt. Philip H. Sheridan, who was stationed at the fort. Simpson graduated from Willamette University in 1866 and immediately took up the study of law there. He was admitted to the bar when he had reached the required age in 1867 and opened a practice in Albany with R.S. Strahan. Simpson married Julia Humphrey in 1868, and they had two sons; she divorced him seven years later.

Simpson’s law practice did not flourish, and he quit the bar in 1870 to begin a career as newspaper editor, working for the Corvallis Gazette, the Eugene Oregon State Journal, the Oregon Statesman, and papers in Astoria and Portland. By age thirty, he was an alcoholic, having been introduced to liquor by the soldiers at Fort Yamhill, and until his death in 1899 he was unable to work steadily at any one thing. In addition to periodic work at newspapers, he was a contributor to H.H. Bancroft’s History of the Pacific States of North America, and in 1878 he completed and edited Mrs. H.V. Stitzel’s novel What Came of It after she had died. He was also a clerk in the Oregon House of Representatives, where his father represented Benton County.

Although he is primarily remembered as a poet, Simpson was also known for his stories, including vivid descriptions of Fort Yamhill, the blustering Capt. David Allen (D.A.) Russell, the dashing Lieutenant Sheridan, and the venerable Sam (To-qua-he-ar), a chief of the Rogue River people. Simpson published poems and stories in regional magazines and newspapers during the 1870s and 1890s. In 1910, ten years after his death, many of his poems were collected by colleagues and friends and published as The Gold-Gated West: Songs and Poems, edited by W.T. Burney. Simpson’s work marked a kind of starting point in regional literature. Author and editor William Fidler wrote in 1914: “He met completely that excellent definition of poetry which says it consists of ‘good thoughts happily expressed in faultless rhyme and meter’.”

It is Simpson’s poem “Beautiful Willamette”—composed when he was twenty-two and published in the Albany Democrat on April 18, 1868—that his contemporaries associated most with him. Joaquin Miller called it “the most musical poem written on the Pacific Coast,” and it was reprinted in most Oregon newspapers and by leading California and eastern papers as well. “Ad Willametam,” as he originally titled it, is an example of the pastoral poetry popular with readers of the time, who regarded it as refined and compelling, the quintessential Oregon poem.

On the roaring waste of ocean

Shall thy scattered waves be tossed,

Shall thy silver tongues be lost.

O! thy glimmering rush of gladness

Mocks this turbid life of mine!

Racing to the wild Forever

Down the sloping paths of Time.

Simpson’s first published poem was his best, or at least his most famous. “That has exercised a sort of tyranny over me,” he confessed to Fidler. Still more tyrannical was the grip of alcohol, as he bitterly lamented in the poems “Quo Me, Bacche?” and “Wreck.” At Simpson’s death, Harvey Scott, longtime editor of the Oregonian, expressed regret that the state had produced little in the realm of literary creativity and handed down his unequivocal verdict that “Simpson’s death leaves Oregon with no poet of merit or reputation.”

Sam Simpson died in Portland on June 14, 1899, the result of a fall while inebriated. He is buried in Lone Fir Cemetery. 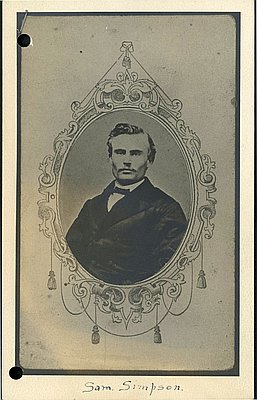 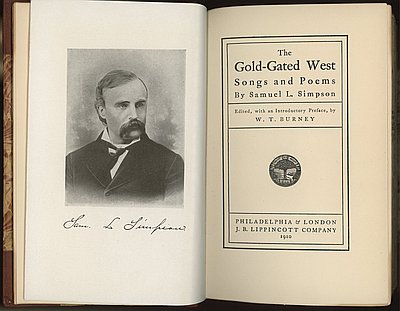 Throughout most of his life, Edwin Markham was known as the Dean of American Poetry, the Laureate of Labor, and—in his own words—the Poet Highwayman. His work as a poet and social reformer brought him recognition throughout the West and across the United States. He founded the Poetry Society of …

Ralph James Salisbury was an Oregon poet, author, editor, and teacher. He is the author of eleven books of poetry, including Rainbows of Stone (2000), an Oregon Book Award finalist; three books of short fiction; and a memoir, So Far, So Good (2013). His work reflects his Native …